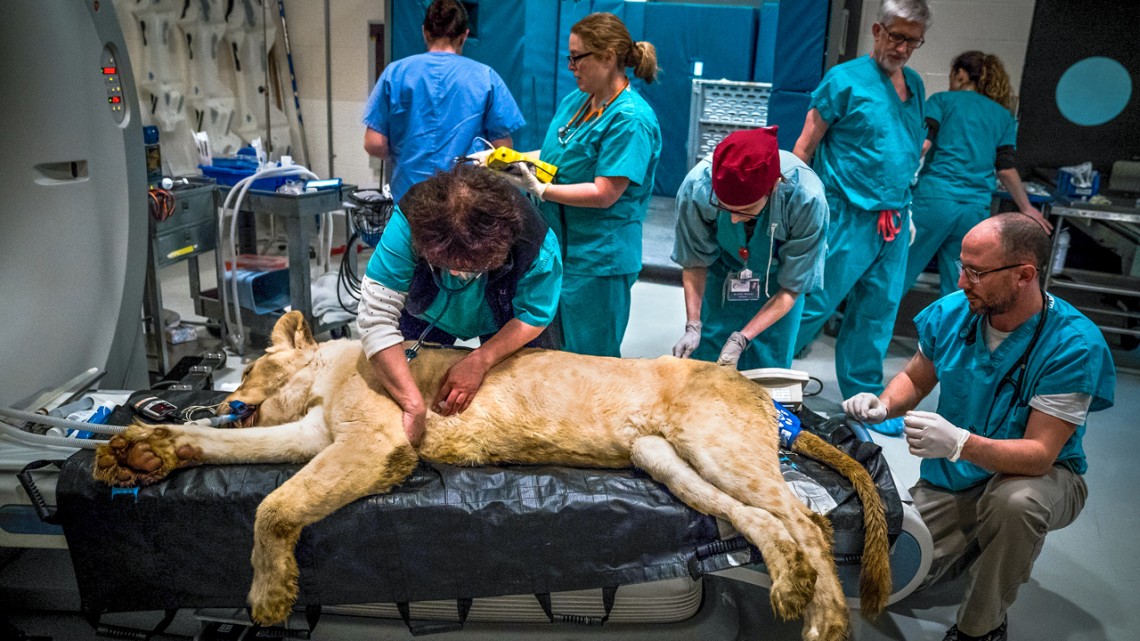 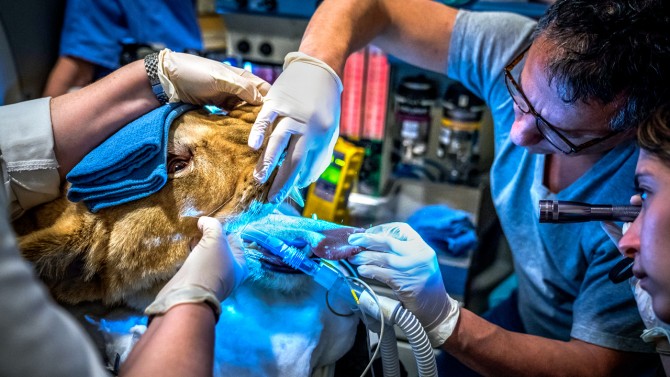 Dr. Santiago Peralta, assistant professor of dentistry and oral surgery, examines Ntsumi’s mouth to determine if a tooth issue contributed to her lack of appetite. 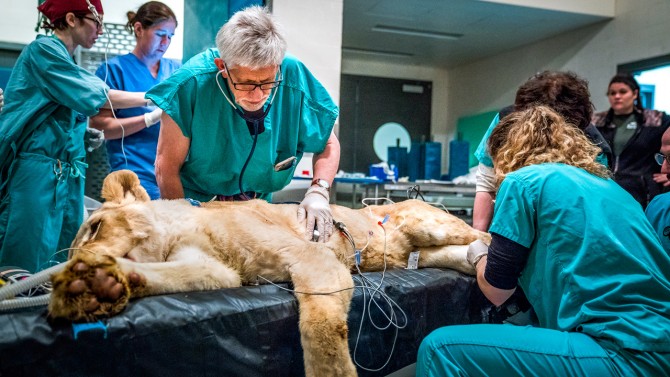 During Ntsumi’s physical exam, clinicians found a life-threatening mass in her small intestine and immediately prepared her for surgery.

Newswise — ITHACA, N.Y. – A big cat got the lion’s share of attention – literally – when her keepers took her to the Cornell University Hospital for Animals (CUHA).

Veterinarians at the hospital diagnosed Ntsumi, a white African lioness, with an intestinal mass, which they surgically removed Feb. 6.

“While the diagnostic tests and surgery we performed were routine, the size and species of this animal made it challenging and unique,” said Dr. Noha Abou-Madi, associate clinical professor of zoological medicine.

The lioness’ keepers at Animal Adventure Park, 60 miles away in Harpursville, New York, noticed she wasn’t acting normally. Ntsumi, who weighs more than 200 pounds, had an inconsistent appetite and short bouts of lethargy.

“Ntsumi has always been a relatively agreeable animal, eager to work with her keepers, and confidently the dominant female over our other lioness [Bisa], often relaxing alongside Solomon, the male white African lion,” said Jordan Patch, owner of Animal Adventure Park. “What made everything a bit harder to track, trace or identify was that after a day or so of discomfort, Ntsumi would be back to herself – playing among the others and consuming all of her food.”

After observing her and providing medical care, the park’s veterinary team referred Ntsumi to Cornell. There, Abou-Madi reviewed Ntsumi’s medical records and lab work. With licensed veterinary technician Samantha Koba, Abou-Madi planned a schedule where specialists from key services at the hospital – including anesthesiologists, radiologists, dentists, small-animal surgeons and internists – would be ready and available to help during the unusual visit.

“For us in the section of zoological medicine, we work with wild species every day,” said Abou-Madi, “and in the past, we have had a few tigers, bears and other lions at CUHA for advanced diagnostics, but this is still an unusual situation.”

Erin Lien, Animal Adventure Park’s curator, transported Ntsumi to Ithaca without incident. The lioness announced her arrival with roars and growls from within a metal crate specially designed for transporting large carnivores.

“We made sure that upon arrival, she was placed in a quiet and secure room,” Abou-Madi said. “The visual examination was very limited by the crate, and so we safely performed the complete physical examination once she was anesthetized.”

While clinicians prepared Ntsumi for a CT scan and diagnostic tests, they felt a large, hard mass in her abdomen. The scan confirmed this as the cause of her symptoms: a mass impacting her small intestine. Ntsumi was immediately prepped for emergency surgery. Left untreated, the mass would result in Ntsumi’s death.

“While intestinal obstructions have been reported in large cats, they are not common,” said Abou-Madi. The movement of the mass inside Ntsumi’s intestines accounted for her inconsistent behavior, resulting in good and bad days.

Back home at Animal Adventure Park, Ntsumi recovered in a smaller holding area for several weeks to prevent infection and excessive play, which can disrupt the surgical sutures.

“Almost immediately, Ntsumi’s consumption rates returned to normal levels, her activity and response was baseline and she very much wanted to rejoin Solomon and Bisa,” said Patch. “The lionesses greeted one another with open paws, and without issue.”

Said Abou-Madi, “The clinicians, staff and students at CUHA came together to provide Ntsumi with expert veterinary care. We are glad she is recovering so well.”

Caption: Dr. Santiago Peralta, assistant professor of dentistry and oral surgery, examines Ntsumi’s mouth to determine if a tooth issue contributed to her lack of appetite.

Caption: During Ntsumi’s physical exam, clinicians found a life-threatening mass in her small intestine and immediately prepared her for surgery.