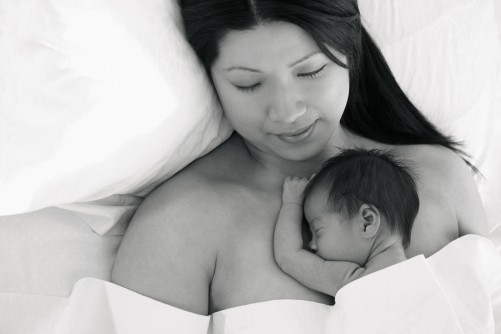 For the first time, UCLA scientists have discovered higher levels of a protein called humanin in the placenta tissue of women who give birth to severely underweight infants. This protein plays a role in breaking down carbohydrates and delivering nutrients to other organs, including muscle. The researchers suspect that levels of humanin rise to protect the fetus during placenta failure.

Up to 10 percent of pregnancies are affected by intrauterine growth restriction, in which a newborn weighs less than 5 ½ pounds at full-term delivery. The condition heightens the risk for a wide range of serious health problems. The cause remains poorly understood, but most physicians blame a malfunction in the placenta that prevents the mother’s bloodstream from delivering oxygen and nutrients to her fetus.

In studying the human placenta, researchers looked at gene expression: the process by which a gene’s DNA sequence is converted into cellular proteins. They compared the placentas of women who gave birth to healthy babies to the placentas of women who delivered low-birthweight infants. The team found significantly higher levels of humanin in the latter group. This protein protects the body against oxidative stress, which hampers the body’s ability to defend itself against toxic free radicals (a type of particle linked to disease).

Dr. Carla Janzen, an associate professor of obstetrics and gynecology at the David Geffen School of Medicine at UCLA, and Dr. Sherin Devaskar, the Mattel Executive Endowed Chair in Pediatrics at UCLA Mattel Children’s Hospital and executive director of the UCLA Children’s Discovery and Innovation Institute, led the study.

The findings are published in the March 28 edition of PLOS ONE.

The study was supported by funding from Eunice Kennedy Shriver’s National Institute of Child Health and Development.