Low Levels of Vitamin a May Fuel TB Risk 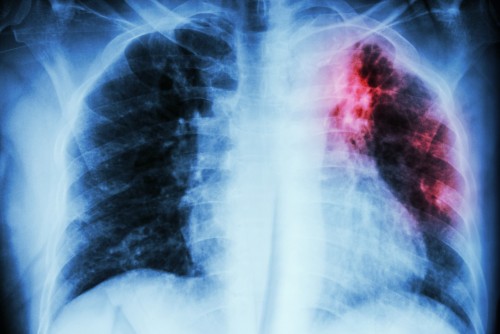 Newswise — People with low levels of vitamin A living with individuals sick with tuberculosis may be 10 times more likely to develop the disease than people with high levels of the nutrient, according to research led by investigators at Harvard Medical School.

The findings, published May 20 in Clinical Infectious Diseases, are based on an analysis of blood drawn from more than 6,000 household contacts of people diagnosed with TB in Lima, Peru.

The study findings do not prove a cause-and-effect relationship between vitamin A levels and TB disease, the researchers caution, but the potent link between the two suggests that vitamin A supplementation might be an important part of controlling the spread of TB—one of the leading causes of death worldwide.

“This is one of the strongest risk factors reported in a large epidemiological study in years,” said senior author Megan Murray, the Ronda Stryker and William Johnston Professor of Global Health at Harvard Medical School. “If the link is affirmed in a clinical trial of vitamin A supplementation, it would make a powerful case for using this approach to prevent TB in people at high risk of disease.”

A 10-fold increase in risk is striking, the investigators said. To put it in perspective, smoking tobacco increases the risk for heart disease two to four times, according to the Centers for Disease Control and Prevention.

More than 1.8 million people died from TB in 2015. TB strikes hardest in low- and middle-income countries, where vitamin A deficiency can affect up to 30 percent of the population.

“It’s exciting to think that something as simple and inexpensive as supplementing people’s diets with vitamin A may be a powerful tool for preventing TB,” Murray said.

Vitamin A, also known as retinol, is best known among public health experts for its association with blindness. Healthy levels of the nutrient have been defined as those needed to prevent damage to eyesight. Previous studies have suggested that vitamin A modulates the immune system and may ward off infection. However, just how vitamin A might affect the risk for TB has, up until now, remained unclear and a matter of debate.

In the Lima study, the researchers found that the protective effect of vitamin A grew stronger as levels of the nutrient increased. Protection continued to grow well above what has been considered the minimum healthy level.

Working with Mercedes Becerra, HMS professor of global health and social medicine, Murray designed the study to investigate bacterial and host determinants of TB infection and disease. The research was conducted through a cooperative agreement with the National Institutes of Health.

The study began with people who sought care in any one of 106 clinics around the city of Lima. When a patient was diagnosed with TB, his or her household contacts were asked whether they wanted to participate in the study. Those who agreed were asked to give a baseline blood sample.

Of the more than 6,000 participants who agreed to have their blood analyzed, 258 people developed TB disease. Among those, 192 became sick with TB after enrollment in the study. Researchers compared 180 blood samples obtained from people who developed TB disease during that time with blood samples obtained from household contacts who did not become sick. Participants were monitored regularly throughout the one-year follow-up for disease symptoms.


Vitamin A levels were a potent predictor of TB disease risk.

Vitamin A deficiency—defined as less than 200 micrograms per liter of blood—fueled the risk of developing TB disease 10-fold. That risk was 20 times higher among young people between the ages of 10 and 19. That finding, the researchers say, suggests that vitamin A may play an even greater role in immunity among younger people.

The researchers found that vitamin A levels in the baseline sample strongly predicted progression to TB disease, even after adjustment for socioeconomic status, body mass index and other conditions thought to increase TB disease risk or affect vitamin A levels.

Notably, the researchers analyzed blood samples before individuals became ill to rule out the possibility that low vitamin levels were a symptom of the disease known to interfere with appetite and lead to nutritional deficiencies.

Meanwhile, Murray and colleagues at Brigham and Women’s Hospital and elsewhere have continued the research initiated on the original grant and are now seeking to identify different factors that affect the interplay between host and pathogen and that can alter infection risk and disease progression. Such factors include metabolic, genetic and immune factors. This ongoing work is part of the NIH-funded Tuberculosis Research Units program.

The work is part of a 20-year partnership between HMS researchers and Partners In Health, where Murray is director of research, PIH’s sister organization Socios En Salud Sucursal Peru, and local and national community and government organizations in Peru.

This long-term collaboration has enabled Harvard Medical School scientists and others to develop the research capacity required to perform large, complex studies in resource-poor settings, including collecting tens of thousands of blood samples and processing them at local labs built by the research consortium.

Becerra noted that conducting research responsibly in these environments can not only deepen scientific and clinical knowledge, but also directly improve care. While following up with people who share a home with those sick with TB is a standard part of care in the United States and Europe, the practice is less common in resource-poor areas. To conduct this study, the Socios En Salud field team visited TB-exposed family members at home to see whether they became sick, referring them for treatment more promptly if they did, and thus improving the level of care they received, Becerra said.

Will vitamin A supplementation or improved diet to reduce the risk of TB? Answering that question will require a clinical trial, Murray said.  The Tuberculosis Research Unit program collaborative includes colleagues who do basic science research using animal models, and Murray says that they have already begun building a guinea pig model for TB and vitamin A deficiency, a crucial first step in moving toward testing an intervention in humans.