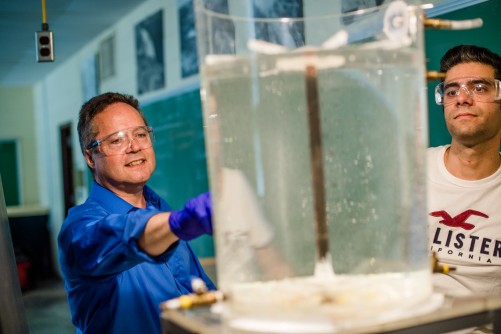 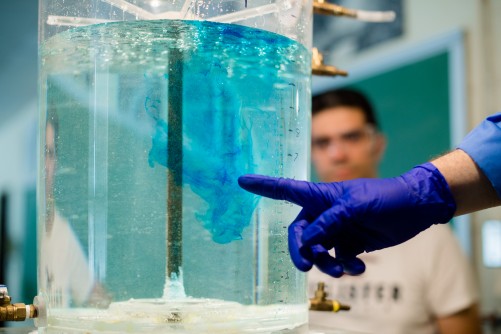 Alizadeh Fard and Barkdoll add colorants to the water to demonstrate how the sprinkler system effectively circulates the water within the experimental tank. 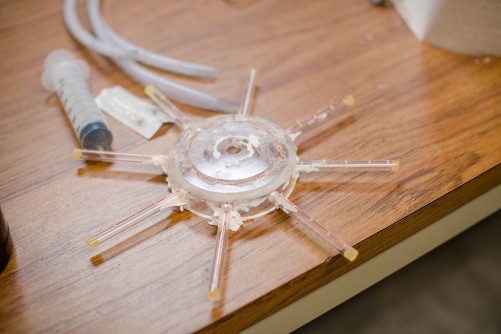 The PVC spraying mechanism that causes the water to circulate constantly within a tank to prevent a stagnant top layer clotted with algae and bacteria.

Clever, fundamental engineering could go a long way toward preventing waterborne illness and exposure to carcinogenic substances in water.

Most of us are used to turning on a tap and water coming out. We rarely question whether this will happen or whether the water is clean enough to bathe in or drink. Though the process of maintaining water quality is practically invisible to most of us, removing bacteria and contaminants from water requires a lot of effort from both humans and treatment systems alike.

In communities around the nation, there are large water-storage tanks for municipal drinking use. Many such tanks have a line in to supply the tank with water, and a line out. However, these lines in and out are frequently at the tank bottom. Though the tanks are refilled daily, the water at the top of the tank is never used and becomes stagnant. Even though many municipal water supplies are treated with chlorine, the top water layer can become a breeding ground for bacteria, algae or waterborne illness, such as giardia and E. coli.

“If the water is not moving, (bacteria and algae) can start growing,” Barkdoll says. “It may not be originally from the water source; it could be from the air. Or the chlorine in the stagnant water could be used up after some time. You want the water to keep moving, especially in hot regions of the country.”

But if there’s a large fire in the community or surrounding countryside, the water tank is drawn down significantly, and people then drink the stagnant water.

“So, when you have a fire, all the stagnant water goes out to everybody’s house,” Barkdoll says. “After a fire, people get sick, that’s a known thing. That’s the problem that we’re trying to fix.”

To remedy the problem, Alizadeh Fard and Barkdoll created shower head-like attachments that can be added to new or existing water tanks for minimal cost. Adding a PVC-pipe sprinkler at the top of the tank, and a reverse sprinkler at the bottom of the tank, injects water into the system and keeps all the water circulating. Alizadeh Fard and Barkdoll published their article on this simple but effective system in the Journal of Hydraulic Engineering March 15. They hope it will be a low-tech solution easy for water quality managers to adopt.

But organic contaminants are not the only source of contaminated water. Few municipal systems are equipped to handle micropollutants—such as pharmaceuticals, hormones, microplastics, nanoparticles in socks and synthetic fleece, and antifungal compounds—even types of industrial waste that are present in very low concentrations. Despite the small amounts—mere micrograms—of these pollutants in water, they still have carcinogenic effects on humans and aquatic creatures. Retrofitting treatment plants to filter for micropollutants is expensive, leading Barkdoll and Alizadeh Fard to explore potential solutions.

“These contaminants have long-term effects on health,” Alizadeh Fard says. “Most of our treatment plants have not been designed to remove them from water, so it’s important to find a reliable solution to address the problem.”

The researchers struck on the idea of adsorbing pollutants from water. Adsorption occurs when molecules essentially stick to a surface. The first method Alizadeh Fard and Barkdoll tested was to use polymer-coated magnetic nanoparticles to adsorb Tonalide (used to mask odors and often found in detergents), Bisphenol-A (better known as BPA, used to make plastics clear and tough), Triclosan (an anti-bacterial and anti-fungal agent used in cleaning products that is now banned), Metolachlor (an herbicide), Ketoprofen (an anti-inflammatory) and Estriol (an estrogen supplement).

The polymer-coated magnetic nanoparticles were most effective at adsorbing Ketoprofen and BPA, removing the pollutants in 15 minutes with 98 and 95 percent effectiveness, respectively, with only 0.1 milligram of the adsorbent.

Barkdoll and Alizadeh Fard say that one of the key components of their work is that the adsorbents are reusable once rinsed with a restorative methanol solution. In the lab, the polymer-coated nanoparticles were restored and used again five times before seeing decreased effectiveness.

The researchers have also used magnetic carbon nanotubes and activated carbon as absorbents. During the lab trials, the polymer-coated nanoparticles have so far proven to be the most efficient.

Next Steps: Validating the Research Empirically

The researchers say the next phase is to scale-up for use in water treatment plants.  Removing micropollutants from water using technology that is sustainable and affordable offers the potential to protect human and aquatic health without expensively retrofitting treatment plants.

Unfortunately, some of humanity’s greatest problems are those of their own making. But pioneering and validating technologies to solve human-created problems has long providence and will no doubt continue.

“Civil and environmental engineers will have to handle whatever society hands to us,” Alizadeh Fard says. “We will have to remove nanoparticles, and other things such as opioids. It’s a topic we have to discuss politically and socially as well.”

Journal of Hydraulic Engineering; Journal of Molecular Liquids; Colloids and Surfaces A