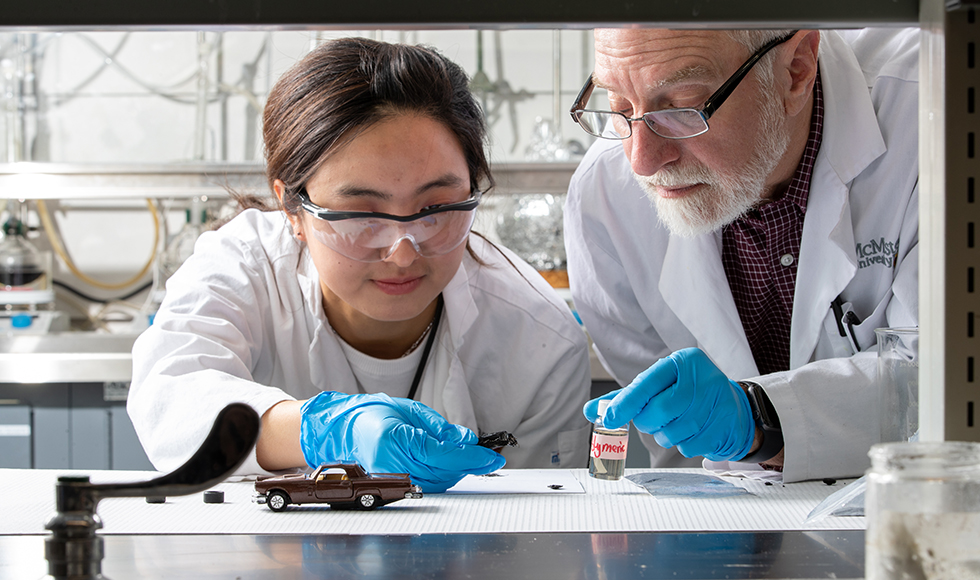 Newswise — A team of chemists at McMaster University has discovered an innovative way to break down and dissolve the rubber used in automobile tires, a process which could lead to new recycling methods that have so far proven to be expensive, difficult and largely inefficient.

The method, outlined in the journal Green Chemistry, addresses the enormous environmental burden posed by tires, approximately 3 billion of which were manufactured and purchased worldwide in 2019.  Most of those will end up in massive landfills or storage facilities, ultimately leaching contaminants into the ecosystem.

In 1990, a massive fire continued to burn out-of-control in a pile of 14 million scrap tires near Hagersville, Ontario. It continued for 17 days, spewing toxic smoke into the environment, and drove 4,000 residents from their homes.  The fire has been linked to many long-term health issues, including rare cancers among the firefighters who worked on scene for days.

Tires are a typical example of a product prepared for a single use from a non-renewable resource.  While some are used as fuel in the cement industry or broken down into crumbs to use as fillers in asphalt, cement or artificial turf, there is no convenient method for recovering the petroleum-based polymers from which they are made so they cannot be easily reused, effectively repurposed, or recycled.

“The chemistry of the tire is very complex and does not lend itself to degradation – for good reason,” says Michael Brook, a professor in the Department of Chemistry & Chemical Biology at McMaster and lead author of the study. “The properties that make tires so durable and stable on the road also make them exceptionally difficult to break down and recycle.”

Charles Goodyear first developed the technique of curing tires in 1850 by combining sulfur with natural rubber, which forms bridges between the natural polymers and transforms the mixture from fluid to rubber.

In the paper, researchers describe a process to efficiently break down the polymeric oils by breaking the sulfur-to-sulfur bond. Brook likens the structure to a piece of fishnet.

“We have found a way to cut all the horizontal lines so instead of having a net, you now have a large number of ropes, which can be isolated and reprocessed much more easily,” he says.

The new method could help to eliminate and prevent the major environmental concerns and dangers posed by stockpiled tires.

While promising, researchers caution that the new method has some limitations because it is expensive for industrial applications.

“We’re working on it, but this is the first major step. This process closes the loop on automotive rubber, allowing old tires to be converted into new products,” says Brook.

Attention editors:  A copy of the paper can be found at this link: https://pubs.rsc.org/en/content/articlelanding/2019/GC/C9GC03545A#cit3

A video and high resolution photo explaining the process can be found at this link: https://adobe.ly/2Tb76oN