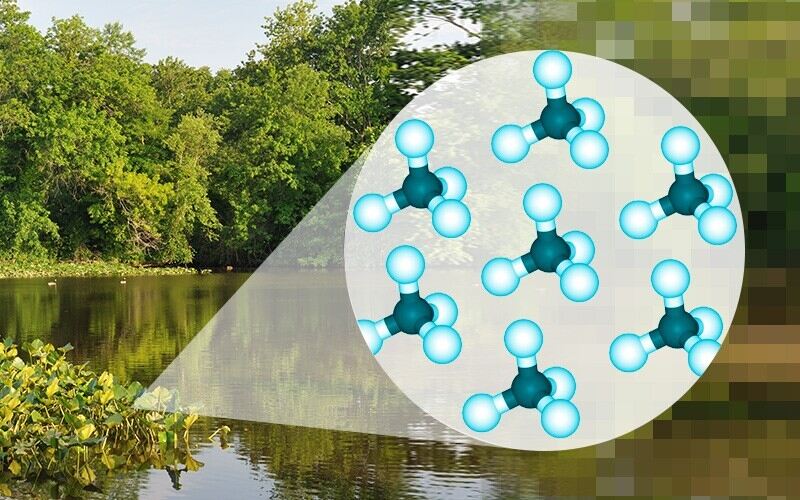 Newswise — A pair of University of Delaware researchers were studying “blue carbon” — the carbon stored in coastal ecosystems such as mangrove forests, salt marshes or sea grasses — when they found something no one expected to see in a salt marsh: large quantities of methane in the soil.

Angelia Seyfferth and Rodrigo Vargas of the Department of Plant and Soil Sciences in UD’s College of Agriculture and Natural Resources were leading different projects in a salt marsh and observed — from different angles — a previously unrecognized potential source of methane, an important greenhouse gas.

Coastal ecosystems such as salt marshes, sea grasses and mangroves are areas where land and the coastal ocean meet and are known to store large amounts of carbon despite their small representation around the world. This compares to the relative high amount of carbon stored in forests which cover a larger surface of the Earth. In other words, you can store more carbon in an acre of a blue carbon ecosystem than in an acre of most forests.

High concentrations of methane had neither been seen nor expected in these salt marshes, because it was assumed that high sulfate concentrations in these low- or no-oxygen containing sediments would halt the microorganisms that produce methane because of competition between soil microbes. The soil microbiome is extremely diverse, however, and this research has shown that microorganisms can make methane in different ways, salt marshes can be hotspots of methane production and these coastal areas must be examined in light of that new information.

“These areas can be significant sources of methane, a very potent greenhouse gas,” Seyfferth said. “And when we think of how the land might change, through management, sea-level rise or climate impacts, understanding these systems now will help us better predict and prepare for the future.”

Seyfferth’s study, published in the journal Geochimica et Cosmochimica Acta, looked at carbon cycling patterns in different locations of a tidal marsh at different times in the tidal cycle.

Vargas’ study, published in the Journal of Geophysical Research-Biogeosciences, looked at the biochemical factors in play in the same area, examining seasonal differences, tidal influence and other factors.

Both studies focused on the St. Jones Reserve, southwest of Dover, Delaware, which is part of the National Estuarine Research Reserve System.

And both presented a paradigm shift in our understanding of methane, pointing to the need for more study of salt marshes and their implications for management and global environmental change.

“One part of the story is why that methane is there,” Vargas said. “We thought no methane should be there. That’s what we expected. Then we start finding large concentrations in the sediments — and that is the first paradigm shift.”

Seyfferth was able to identify biogeochemical mechanisms of methane production that had been overlooked by many researchers, he said.

“And the second part of the story is what happens to that methane,” he said. “What we have been missing in many studies is not the losses of methane from the sediments to the atmosphere, but the potential lateral losses of methane to the coastal ocean.”

Seyfferth said that’s partly because most researchers draw samples from accessible areas where they don’t have to get into the marsh — near the creeks or near boardwalks, for example. Her team tested more areas and deeper into the sediments.

“Areas farther away from creeks tend to be flooded all the time,” she said. “Many studies don’t reflect the whole area of the salt marsh…. They didn’t find methane in vertical measurements and simply didn’t know that it was being produced at depth and either consumed in the surface sediments or moved laterally elsewhere.”

Finding this lateral shift suggests that methane is being produced by microorganisms and moving with flowing tidal waters from sediments into creeks, which are super-saturated with methane and resulting in unexpected large emissions from the surface of the water to the atmosphere.

“It’s not that methane is now occurring and didn’t before,” Seyfferth said. “It’s just that people weren’t looking deep enough for it.”

These findings have huge implications for how this type of environment is managed, she said.

“If instead of maintaining a preserve, the salt marsh is drained to build new waterfront property, a huge plume of methane will flux out into the atmosphere,” Seyfferth said.

Over a 100-year period, methane is about 28 times more potent than carbon dioxide as an Earth-warming gas, Vargas said, which means a little can pack a powerful environmental punch.

“It’s important to know that these ecosystems are valuable, not only for the potential to store carbon in vegetation and in sediments, but also for their storage of methane gas,” he said.

That’s not to say salt marshes should be considered sources of pollution.

“The beauty of scientific discovery is understanding how a system works,” Vargas said. “These are beautiful ecosystems, but they have mysteries. Those mysteries are there for us as humans to discover them and learn how the Earth functions to secure a better future for all.”