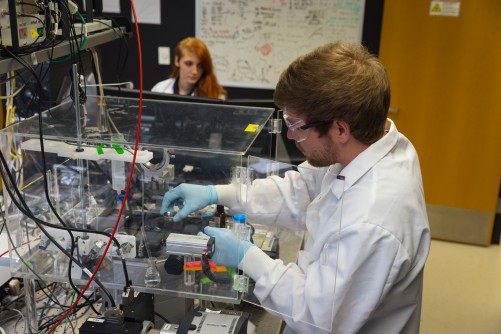 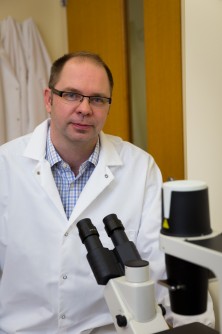 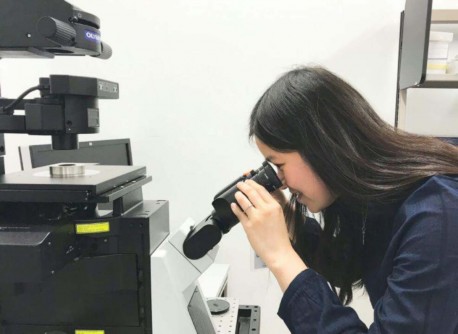 As part of her doctoral research at the South Dakota School of Mines & Technology nanoscience and nanoengineering program, Amy Hor examines chemically fixed cells using correlated fluorescence and atomic force microscopy. She worked under the direction of professor Steve Smith. 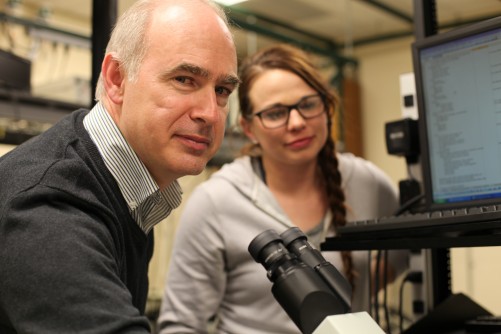 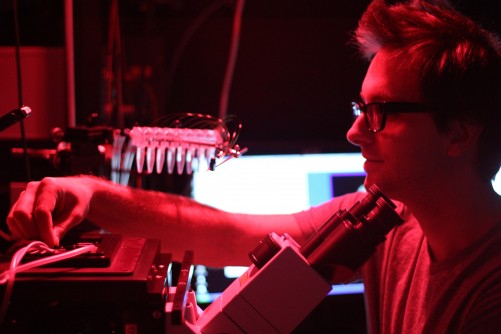 Senior investigator Justin Taraska in the Laboratory of Molecular and Cellular Imaging at the National Heart, Lung, and Blood Institute (NHLBI), part of the National Institutes of Health performs imaging using a fluorescence microscope. His federally funded intramural research lab specializes in correlative fluorescence and electron microscopy on cell membranes. 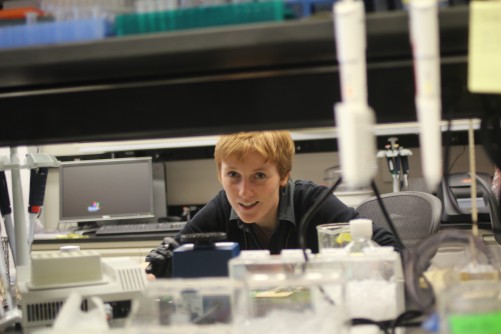 Staff scientist Kem Sochacki prepares an imaging sample in the wet lab in the Laboratory of Molecular and Cellular Imaging at the National Heart, Lung, and Blood Institute (NHLBI), part of the National Institutes of Health, in Bethesda, Maryland. She helped invent the correlative fluorescence and electron microscopy technique.

Newswise — Scientists are one step closer to understanding how cells reshape their surfaces to internalize material from their surroundings, thanks to collaboration among researchers from two South Dakota universities and the National Institutes of Health. Their collaborative work helps scientists understand the mechanics of protein machinery and the cell membrane. The work has implications for understanding how viruses gain entry to cells, how neurons signal and why cancer cells grow rapidly.

Using three unique types of microscopy, the researchers discovered that protein called clathrin has an unexpected amount of plasticity when bending the membrane. Their work is published in the Jan. 29 issue of Nature Communications.

“All cells in the body bend small patches of their membrane into virus-sized bubbles, known as vesicles, hundreds to thousands of times every minute. The process, known as endocytosis, is one of the main mechanisms by which cells internalize material from the environment and remodel their surfaces,” explained Hoppe, a cell biologist and BioSNTR director.

“This is a fundamental process that has radiating impacts on a multitude of disease processes and important physiological functions in plants, animals and humans,” he said. Mutations in this machinery are involved in neuropathy, diabetes and cancer.

“Endocytosis in human cells is primarily driven by clathrin, which forms a honeycomb lattice that grabs a piece of membrane and pulls it inside the cell,” explained Taraska, a senior investigator in the Laboratory of Molecular and Cellular Imaging at the National Heart, Lung, and Blood Institute (NHLBI), part of the NIH.  “Viruses hijack this process to get into cells; it’s also how many drugs are delivered into a cell.”

Scientists were divided about whether bending starts when the clathrin coat begins assembling or once the assembly has been completed. “We were able to show that membrane bending through clathrin can occur through multiple topological pathways,” Hoppe said.   “Clathrin creates a flexible coat that can deform the membrane as it assembles or after. It can tolerate growing as a pre-curved meshwork or growing flat and bending after assembly—everyone’s a little bit right.”

Smith, a physicist and director of the SD Mines nanoscience and nanoengineering program, said, “This a big technical accomplishment. Three teams separated by thousands of miles examined the same cell, down to the nanometer level— that’s an incredible accomplishment!”

Hoppe and his team used a one-of-a-kind microscope he designed through his NSF Career grant to visualize live human skin melanoma cells, with proteins made fluorescent through a genetic engineering technique called CRISPR and fluorescently tagged membranes.  To precisely image the movements of the cell membrane, the researchers bounced a laser beam off the cell surface.

However, he noted, “The real power is we can make this measurement in under a second, so we can capture fluctuations at the speed at which the membrane bends.”  Moreover, this technique allowed them to compare when the clathrin machinery arrived and when membrane bending occurred.

“The results were surprising,” Hoppe said. “Clathrin was able to bend membrane as it arrived or after it accumulated on the membrane.

To get a better view of this process and to understand the reliability of the method, Hoppe and his team chemically froze the cells at various stages of the membrane-bending process and used ultrasound to “blow off the tops” to visualize the structure of the clathrin coating. They then sent the same cells to Taraska in Bethesda, Maryland, and Smith in Rapid City, South Dakota.

At the NIH, Taraska and Sochacki imaged the cell membranes using super resolution light imaging with fluorescence and transmission electron microscopy, correlating the two by laying one image on top of the other.  “This helped put what Adam was doing into a nanoscale structural context,” Taraska explained.

Smith and his group at SD Mines used atomic force microscopy to take very precise measurements of the clathrin structure and the resulting vesicles, as well as fluorescence microscopy to definitively label each cell. “We also looked at the statistical distributions of vesicle height and diameter,” Smith explained. Each cell had 50 to 100 vesicles.

“It’s like a postmortem autopsy,” Smith said. “The atomic force microscope measures the interaction of a probe with the surface—it’s a tactile measurement but very sensitive. It’s much like Helen Keller’s use of braille; her perception of the world was based on touch.”

This three-pronged approach gave the researchers confidence in their findings—and the collaboration is continuing.

“It was an awesome team science effort and an important model for success,” said Hoppe. “Now we need to ask what molecular mechanisms allow clathrin to accommodate different routes to form vesicles.”