UC San Diego and Salk scientists uncover surprising connection that results in abnormal inflammation and development of atherosclerosis; findings could lead to new therapeutics for other diseases as well 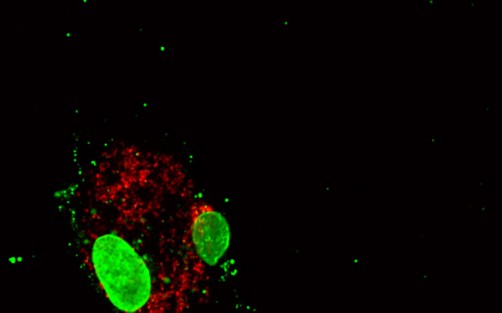 In this micrograph, a human macrophage (a type of immune cell) is shown after reduction of the gene DNMT3A. The large green structure is the cell’s nucleus; red indicates the presence of cytoplasmic protein. The small green dots represent mitochondrial DNA that has escaped from the nucleus into the cytoplasm, inducing an inflammatory response. 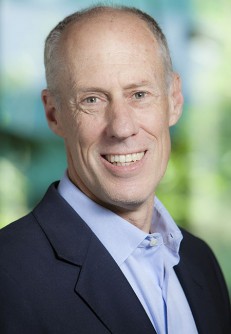 Christopher Glass, MD, PhD, is professor in the departments of Medicine and Cellular and Molecular Medicine at UC San Diego School of Medicine. 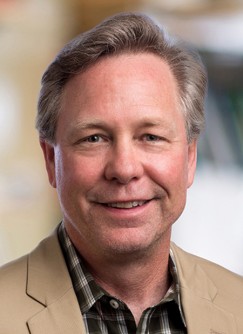 Gerald Shadel, PhD, is director of the San Diego Nathan Shock Center of Excellence in the Basic Biology of Aging at Salk Institute for Biological Studies.

Newswise — Mitochondria are organelles found within most cells, best known for generating the chemical energy required to power cellular functions. Increasingly, however, researchers are discovering how mitochondrial function — and dysfunction — play critical roles in numerous diseases, and even aging.

In a new study published in the August 4, 2022 online issue of Immunity, scientists at University of California San Diego School of Medicine and Salk Institute for Biological Studies report a surprising link between mitochondria, inflammation and DNMT3A and TET2, a pair of genes that normally help regulate blood cell growth, but when mutated, are associated with an increased risk of atherosclerosis.

“We found that the genes DNMT3A and TET2, in addition to their normal job of altering chemical tags to regulate DNA, directly activate expression of a gene involved in mitochondrial inflammatory pathways, which hints as a new molecular target for atherosclerosis therapeutics,” said Gerald Shadel, PhD, co-senior study author and director of the San Diego Nathan Shock Center of Excellence in the Basic Biology of Aging at Salk Institute. “They also interact with mitochondrial inflammatory pathways, which hints at a new molecular target for atherosclerosis therapeutics.”

While studying the roles of DNMT3A and TET2 mutations in clonal hematopoiesis, which happens when stem cells begin making new blood cells with the same genetic mutation, co-senior study author Christopher Glass, MD, PhD, professor in the departments of Medicine and Cellular and Molecular Medicine at UC San Diego School of Medicine, and colleagues noted that abnormal inflammatory signaling related to DNMT3A and TET2 deficiency in blood cells played a major role in the inflammation response that promotes development of atherosclerosis.

But the question remained how DNMT3A and TET2 genes were involved in inflammation and atherosclerosis — the buildup of fatty plaques in arteries and the primary underlying cause of cardiovascular disease. It is estimated approximately half of Americans between the ages of 45 and 84 have atherosclerosis, which is the single leading cause of death in the United States and westernized nations.

“The problem was we couldn’t work out how DNMT3A and TET2 were involved because the proteins they code seemingly do opposite things regarding DNA regulation,” said Glass. “Their antagonistic activity led us to believe there may be other mechanisms at play, which prompted us to take a different approach and contact Shadel, who had uncovered the same inflammatory pathway years earlier while examining responses to mitochondrial DNA stress.”

Shadel and colleagues determined that when TFAM levels are reduced, mitochondrial DNA is expelled from mitochondria into the cell’s interior, setting off the same molecular alarms that alert cells to a bacterial or viral invader and trigger a defensive molecular pathway that prompts an inflammatory response.

Glass’ and Shadel’s labs worked together to better understand why DNMT3A and TET2 mutations led to inflammatory responses similar to those observed during mitochondrial DNA stress. The teams applied genetic engineering tools and cell imaging to examine cells from people with normal cells, those with loss of function mutations in DNMT3A or TET2 expression and those with atherosclerosis.

They discovered that experimentally reducing the expression of DNMT3A or TET2 in normal blood cells produced similar results to blood cells that had loss of function mutations and to blood cells from atherosclerosis patients. In all three cases, there was an increased inflammatory response.

They also observed that low levels of DNMT3A and TET2 expression in blood cells led to reduced TFAM expression, which in turn led to abnormal mitochondria DNA packaging, instigating inflammation due to released mitochondrial DNA.

“We discovered that DNMT3A and TET2 mutations prevent their ability to bind and activate the TFAM gene,” said first author Isidoro Cobo, PhD, a postdoctoral scholar in Glass’ lab. “Missing or reducing this binding activity leads to mitochondrial DNA release and an overactive mitochondrial inflammation response. We believe this may exacerbate plaque buildup in atherosclerosis.”

Shadel said the findings broaden and deepen understanding of mitochondrial function and their role in disease.

Therapeutics that target inflammation signaling pathways already exist for many other diseases. Glass and Shadel believe that blocking pathways that exacerbate atherosclerosis in patients with TET2A and DNMT3A mutations could form the basis for new treatments.