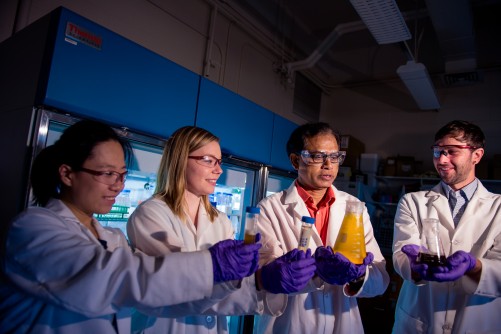 Newswise — A new study, published in Biochemistry this week, examines the biomechanics of sugar-seeking proteins. Specifically, it delves into galectin-3's interaction with glycosaminoglycans (GAG) and proteoglycans. Tarun Dam, an associate professor of chemistry at Michigan Technological University, led the study.

"Seeing galectin-3 interact with GAGs and proteoglycans is like finding a rose in the petunias—it's very unexpected," Dam says. "It's fair to say that this requires revisiting the reported biological functions of GAGs, proteoglycans and galectin-3."

Protein ChemistryThese sugar-loving proteins drive many biological processes in our bodies, from directing white blood cells to infected tissues to serving as biomarkers in cancer assays. For decades, researchers have assumed that two groups of these sugar-seeking proteins—lectins and GAGBPs (GAG binding proteins)—lived similar, but notably separate lives.

"Some proteins are multitaskers, most notably galectin-3, and our bodies' biochemical pathways do not play out in simple, linear processes," Dam says, adding that he and his lab were still surprised to observe a lectin, galectin-3, interacting with proteoglycans and GAGs. "We triple-checked and quadruple-checked this data, and we found consistency in experiment after experiment."

Dam and his team started out with a conventional method called a hemagglutination inhibition assay to determine if galectin-3 recognized GAGs and proteoglycans. Then they used a technique called isothermal titration calorimetry to precisely observe the carbohydrate-binding properties of galectin-3, which verified that the lectin and GAGs could interact.

Expanded Binding PartnersDam says his lab's work in outlining this unexpected protein interaction is just the beginning and suggests that the known biological processes involving GAGs, proteoglycans and galectin-3 may not be as straightforward as they appear. Now that glycobiologists know that galectin-3 and GAGs can interact, the entire community will need to figure what that means for the many biochemical reactions driven by these sugar-loving proteins and their binding partners.

One example is cancer treatments. GAGs are well known for their role in controlling growth factor proteins, which tend to run rampant as cancerous tumors grow. GAGs and proteoglycans are also involved in metastasizing cancer cells that spread and sprout by traveling and breaking out of the bloodstream. Galectin-3 could be interfering with this process or even amplifying it. It could also be affecting pharmaceuticals that target GAGBPs.

Dam and his team's initial observation is unexpected, but opens up new possibilities for the role of galectin-3. A better understanding of the glycobiology and biomechanics will enhance many health research fields, perhaps leading to more nuanced treatments for cancer, immunodeficiency, neural growth and inflammation.