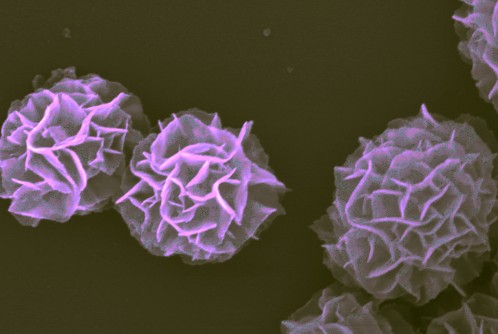 Nanovaccine complexes showing flower-like structure. Each complex is about a micron in diameter, which is equivalent to 1/100 the thickness of a human hair. Image taken with a scanning electron microscope and colored purple. 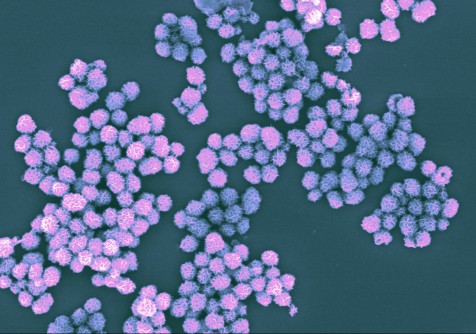 Newswise — NIBIB researchers have created a nanovaccine that could make a current approach to cancer immunotherapy more effective while also reducing side effects. The nanovaccine helps to efficiently deliver a unique DNA sequence to immune cells – a sequence derived from bacterial DNA and used to trigger an immune reaction. The nanovaccine also protects the DNA from being destroyed inside the body, where DNA-cutting enzymes are pervasive, as well as outside of the body when exposed to warm temperatures while being stored or transported. The researchers successfully tested the nanovaccine in mice and detailed their work in the March 2016 issue of the journal Nanoscale.

Tumors evade the immune system by suppressing its ability to recognize and kill cancer cells. The goal of immunotherapy is to normalize and harness the body’s immune system so that it can more effectively fight the tumors.

One approach to immunotherapy has been to introduce a foreign substance into the body called unmethylated cytosine-guanine oligodeoxynucleotides (or CpG). CpGs are distinct patterns of DNA sequences that occur in bacteria but are rare in mammals. When injected into humans, CpGs act as a danger signal that triggers an immune response. Recently, a number of clinical trials have experimented with injecting CpGs directly into a tumor as a way to activate nearby immune cells so that they attack it.

In addition to inducing an immune response at the tumor site, CpGs are also thought to stimulate immune cells responsible for initiating the body’s systemic adaptive immune response. This may help the immune system remember specific proteins associated with cancer cells so that it can identify and destroy the cancer cells if they spread.

Yet, despite its potential, CpG-based immunotherapy has been hampered by a number of challenges. Most notably is that CpG doesn’t spend much time inside a tumor once injected into it. This is because CpGs are relatively small molecules and have a negative charge, two primary characteristics that cause them to be rapidly cleared by the body. CpGs are also susceptible to degradation by DNA-targeting enzymes. As a result, there are not often enough CpGs available to stimulate immune cells in order to generate a sufficient immune response.

Researchers at the National Institute of Biomedical Imaging and Bioengineering, part of the NIH, are working to solve these challenges by creating DNA-inorganic hybrid nanovaccines (hNVs). The hNVs get their name because they combine multiple strands of CpG DNA with an inorganic substance—magnesium pyrophosphate—in order to form extremely small, flower-like complexes that are taken up by immune cells. The complexes protect the CpG DNA from degradation and their size is easily manipulated so that they aren’t quickly cleared by the body. In addition, multiple copies of CpG DNA can be incorporated into each complex, further contributing to a robust immune response.

To determine the behavior of hNVs in mouse immune cells, the researchers incorporated fluorescent molecules into them so that they could be visualized. They found that the hNVs were efficiently taken up by two different types of mouse immune cells, and they induced activation of the immune cells as evidenced by their secretion of proteins involved in inflammation.

Next, in mice that had been given melanoma, the researchers injected either hNVs or just the CpG molecules alone. The hNVs remained in the tumor environment longer than the CpG molecules, and after two injections spaced six days apart, the hNVs had a greater inhibitory effect on the growth of the mice’s tumors. As a result, two of the five mice who received hNVs were still alive after 37 days of treatment (at which point the study ended), whereas no mice receiving CpG alone survived past day 30.

In addition to boosting the immune response induced by CpGs, the hNVs also reduced side effects associated with administration of CpG by decreasing the amount of CpG that leaked out of the tumor and into the bloodstream. One indication of the side effects of CpG immunotherapy is an enlarged spleen. The researchers showed that mice injected with hNVs had spleens that weighed nearly half as much as mice injected with CpG molecules.

According to the researchers, an additional benefit of the hNVs is that they stabilize the CpGs so that they don’t need to be refrigerated while stored or being transported. This is important because refrigeration requirements can significantly increase the price of vaccines and limit who has access to them.

“What’s exciting about these nanovaccine complexes is that they are easy to make, yet they have many capabilities,” said Guizhi Zhu, Ph.D., the paper’s lead author. “They enable a large number of CpG molecules to be delivered to immune cells, they prevent CpG from leaking into the bloodstream and, in doing so, reduce side effects; they can accommodate fluorescent molecules so that CpG behavior can be studied, and they enable CpG to be stored in non-refrigerated conditions.”

Going forward, the researchers plan to investigate the effects of combining the hNVs with tumor-specific antigens, which are proteins found only in tumor cells. By adding these proteins, they hope to further instruct the immune system as to which cells are cancerous and should be killed. They are also interested in combining the hNVs with chemotherapy as well as radiation therapy. DNA–inorganic hybrid nanovaccine for cancer immunotherapy.