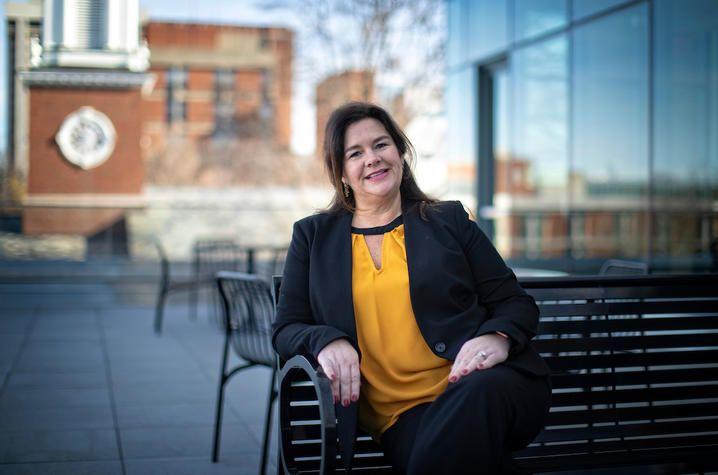 Carrie Oser, professor of sociology in the UK College of Arts & Sciences, leads the GATE study, a 5-year project looking at factors that influence a person's decision to use medication for opioid use disorder in the criminal justice setting.

Known as the Geographic variation in Addiction Treatment (GATE) study, the 5-year project is led by Carrie Oser, professor of sociology in the UK College of Arts & Sciences. Oser and her colleagues will be focusing on the factors that influence a person’s decision to use one of the three FDA-approved medications for the treatment of opioid use disorder (OUD) – methadone, buprenorphine and extended-release naltrexone.

Although research shows that these medications are highly effective at reducing opioid use, infectious disease transmission, and drug-related criminal behavior, uptake of these medications is low – only about 7% of people with OUD receive medications – and more than half of KY counties do not have any providers who prescribe medications for OUD.  It is even more challenging for those involved in the criminal justice system. In the past few years, the Kentucky Department of Corrections has addressed this issue by making naltrexone available inside their institutions and is currently piloting expansion of MAT at three prisons by offering buprenorphine to individuals who OUD that meet clinical and medical protocols.

The GATE study aims to identify how a person’s individual characteristics, personal networks and structural factors influence their decision whether or not to take medication for OUD both during incarceration and following release, and it will specifically look at the differences between urban and rural populations. While other studies have looked at individual and structural factors as predictors of medication use, this study is unique in its focus on the people surrounding the person with OUD and how their support – or lack thereof – and opinions influences decisions on taking medication.

“The goal is to study how the behaviors, beliefs and attitudes of people’s decisions to take medications are shaped through contact and communication with other people in their network,” Oser said. “We are interested in how the networks positively or negatively influence their outcomes. That will help us identify points where we can intervene in that person’s network, and if there are geographic network differences.”

For example, Oser says, if a person with OUD has a parent who says that using medication is “just trading one drug for another,” that provides an opportunity to implement an educational intervention on how OUD medications actually work with the family members in a person’s network, which could positively impact that person’s chances at recovery and a successful re-entry into society.

“We’re also interested in the dynamic nature of these social networks,” Oser said. “Especially when you go through a big life experience – if you’re re-entering society after being incarcerated for a long period of time, your network may change.”

Throughout the duration of the study, Oser and the research team plan to interview approximately 450 people with OUD, beginning with a baseline interview while they’re incarcerated and doing follow-up interviews in the community at six and 12 months after they are released from prison. Additionally, they’ll be working with substance abuse counselors and staff inside the prisons to better understand the process of initiating medications, and with social service clinicians who can help link people to further resources for OUD following release.

The ultimate goal, Oser says, is to figure out which interventions should be offered to help more people understand how medications for OUD can save lives.

“I think the stigma surrounding medications for opioid use disorder is a big part of the problem, but it’s also people just not understanding why medications might be needed,” Oser said. “Opioid use disorders are different than other substance use disorders – if someone with an OUD relapses, especially after their tolerance is low due to incarceration, there’s a high chance that they could experience an overdose and die. That’s what we want to prevent, and medications are one avenue to help prevent fatal overdoses.”

In addition to working with the Kentucky Department of Corrections on this project, Oser is working closely with fellow UK researchers Michele Staton and Hannah Knudsen, project director Maggie Campe, and a team of investigators at Indiana University.