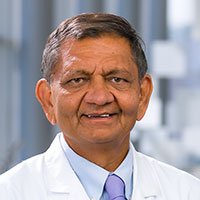 Newswise — DALLAS – Jan. 13, 2021 – A new treatment that combines two existing medications may provide long-sought relief for many battling debilitating methamphetamine use disorder, according to a study to be published tomorrow in The New England Journal of Medicine.

The article, based on a multisite study funded by the National Institutes of Health (NIH), describes how combining an injectable drug currently used to treat alcohol and opioid addictions (naltrexone), and a commonly prescribed antidepressant (bupropion) produced positive results in 13.6 percent of the 403 patients treated, significantly higher than the 2.5 percent response in placebo groups. This is an important advance given that there are now no effective treatments for methamphetamine use disorder, says Madhukar Trivedi, M.D., a UT Southwestern professor of psychiatry and first author of the study.

“It’s unbelievably exciting that we have the first-ever positive treatment results for this addiction,” says Trivedi. “The medical field has not been able to find a treatment for people suffering from meth use disorder.”

Since both drugs are already approved by the Food and Drug Administration for other purposes, clinicians can immediately start using them to treat patients suffering from addiction to the stimulant methamphetamine, he adds.

Almost 1.9 million Americans reported using methamphetamines in 2018, according to a report the following year from the Centers for Disease Control and Prevention (CDC). Deaths involving psychostimulants such as methamphetamine and cocaine have increased sharply since 2012, with more than 10,000 people dying of drug overdoses involving psychostimulants with abuse potential in 2017, according to the same CDC report.

Even when not fatal, “methamphetamine use disorder really disrupts people’s lives in many different ways,” says Trivedi, also Principal Investigator of the Big South-West Node of the National Institute on Drug Abuse-funded Center for Clinical Trials Network and the founding director of UT Southwestern’s Center for Depression Research and Clinical Care.

Stimulant use can also lead to high blood pressure and increased heart rate, resulting in heart attack and organ failure. Use of stimulants like methamphetamine are also associated with sleeplessness, impaired judgment, and aggressive, impulsive behavior, he adds, leading to lost jobs and severed family and social connections. Over time, it can also damage neurons in the brain.

The new study “creates hope for this population and a viable pharmacological treatment option,” Trivedi says.

Aware that each medication had been used by itself to try to treat these patients, Trivedi came up with the idea of combining the two drugs about six years ago. In the study, participants were given 380 milligrams of naltrexone every three weeks and 450 milligrams of extended-release bupropion daily.

During the adaptive double-blind, placebo-controlled study – conducted at UT Southwestern, Columbia University, UCLA, Duke University School of Medicine, and four other institutions – adults with moderate or severe methamphetamine use disorder who had expressed a desire to reduce or stop using meth were assigned to receive either the drug treatment combination or a placebo for six weeks.

In a second stage, 225 participants who did not respond when given the placebo were reenrolled for a second six weeks in an effort to lessen the effect of false reactions.

A positive treatment response was defined as having three out of four urine samples test negative for methamphetamine.

Combining results from the two stages of the study, the weighted average response rate was 13.6 percent for those receiving the medications versus 2.5 percent in the placebo group. That means there was a treatment effect of 11.1 percent once the placebo effect is accounted for, according to the study.

Those given the medication combination also reported less craving for methamphetamines than those given a placebo.

Adverse effects of the therapy were mostly mild or moderate and included nausea (in about a third of those receiving the treatment), tremors (4.6 percent), malaise (3.7 percent), excessive sweating (7.3 percent), and decreased appetite (7.3 percent).

Trivedi, who holds the Betty Jo Hay Distinguished Chair in Mental Health and the Julie K. Hersh Chair for Depression Research and Clinical Care at UT Southwestern, says a logical next step would be to assess the effectiveness of the treatment when used in a traditional clinical setting.

Funding for the study came from the NIH’s National Institute on Drug Abuse and the Department of Health and Human Services. Alkermes, a pharmaceutical company based in Dublin, Ireland, donated the naltrexone and the placebo used in the study. Trivedi is a consultant for Alkermes.