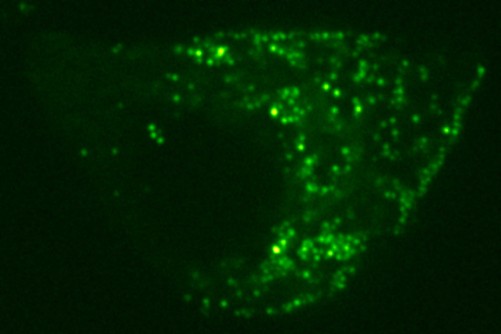 Scientists studied the motion of insulin-containing vesicles, which contain thousands of insulin molecules within an insulin-secreting cell (seen here). This work stimulated collaborative research that led to the development of the single-pixel interior filling function.

The improved method for determining the position of objects captured by imaging systems is the result of new research by scientists at the University of Chicago. The findings, published Dec. 26 in Proceedings of the National Academy of Sciences, provides a mechanism—known as single-pixel interior filling function, or SPIFF—to detect and correct systematic errors in data and image analysis used in many areas of science and engineering.

“Anyone working with imaging data on tiny objects—or objects that appear tiny—who wants to determine and track their positions in time and space will benefit from the single-pixel interior filling function method,” said co-principal investigator Norbert Scherer, a UChicago chemistry professor.

Researchers across the sciences use imaging to learn about objects on scales ranging from the very small, such as nanometers, to the very large, such as astrophysical scales. Their work often includes tracking the movement of such objects to learn about their behavior and properties.

Many imaging systems and image-based detectors are constituted of pixels, such as with a mega-pixel cell phone. So-called particle tracking allows researchers to determine the position of an object down to a single pixel and even explore sub-pixel localization to better than one-tenth of a pixel accuracy. With an optical microscope’s resolution of about 250 nanometers and an effective pixel size of about 80 nanometers, particle tracking allows researchers to locate the center or location of an object to within a few nanometers, provided enough photons are measured.

But such sub-pixel resolution depends on algorithms to estimate the position of objects and their trajectories. Using such algorithms often results in errors of precision and accuracy due to factors such as nearby or overlapping objects in the image and background noise.

SPIFF can correct the errors with little added computational costs, according to Scherer. “Until this work, there were no simple ways to determine if the tracking and sub-pixel localization was accurate and to correct the error if it was not,” he said.Applicable to many disciplines

“Analyzing an image to obtain a rough estimate of an object’s position isn’t too difficult, but making optimal use of all the information in an image to obtain the best possible tracking information can be really challenging,” said David Grier, professor of physics at New York University, who was not involved in the research. “Given how widely image-based particle tracking has penetrated physics, chemistry, biology and many engineering disciplines, this method should be very widely adopted.”Sub-pixel data analysis can be biased by subtle features of the image-formation process, according to Grier, and these biases can shift a trajectory’s apparent position by as much as half a pixel relative to its true position. “For sensitive measurements of delicate physical processes, that’s a disaster,” Grier said.“The method described in the PNAS paper, however, explains how to detect these biases and how to correct for them, thereby helping to confirm that the tracking information is reliable,” he added.                                                                  The research described in the paper applied SPIFF to experimental data on solids (i.e., colloidal spheres) suspended in a liquid, but the researchers have now applied their method to many other datasets, including nanoscale features of cells (e.g. vesicles), metallic nanoparticles and even single molecules, Scherer said, adding that the SPIFF method is applicable to all tracking algorithms.“We believe that SPIFF will be important for many studies in biology and nanoscience and, although we have not worked with images from telescopes, SPIFF could even help determine and correct errors in star-tracking data,” Scherer said.