A two-step process of multiplying stem cells found in the inner ear and converting them to hair cells may restore hearing lost to age, noise damage and other factors. 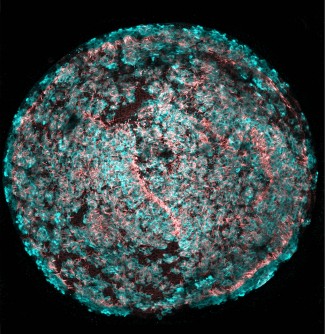 Credit: Will McLean, Albert Edge, of Massachusetts Eye and Ear

A combination of drugs and growth factors expands stems cells expressing Lgr5 and then converts them into hair cells. Generation of hair cells is a potential treatment for deafness caused by damage to the inner ear.

Newswise — Boston, Mass. — The loss of tiny, sound-sensing cells in the inner ear, known as “hair cells,” is a leading cause of hearing loss, a public health problem affecting at least 5 percent of the world population. Hair cells, which do not regenerate on their own, can die away from a variety of factors including excessive noise exposure, certain medications, infection and as part of the natural aging process.

In 2013, Massachusetts Eye and Ear researchers successfully regenerated hair cells and restored partial hearing to mice by converting cells found in the inner ear into hair cells. However, the success of restoring hearing through this approach was limited by the small number of cells that could be turned into hair cells.

In a study published online today in Cell Reports, a research team from Mass. Eye and Ear, Brigham and Women’s Hospital and Massachusetts Institute of Technology has shown that LGR5+ cells can be augmented to a much higher volume and then converted into hair cells, lending hope that full hearing can be restored to those with hearing loss due to damaged hair cells. From a single mouse, the team generated more than 11,500 hair cells (compared to less than 200 hair cells generated without efforts to augment).

“We have shown that we can expand Lgr5-expressing cells to differentiate into hair cells in high yield, which opens the door for drug discovery for hearing,” said senior author Albert Edge, Ph.D., Director of the Tillotson Cell Biology Unit at Mass. Eye and Ear and a Professor of Otolaryngology at Harvard Medical School. “We hope that by stimulating these cells to divide and differentiate that we will improve on our previous results in restoring hearing.”

The researchers were encouraged by a previous Mass. Eye and Ear discovery that the inner ear contained stem cells that could be turned into hair cells in a dish. These cells contained a protein called Lgr5, which is found in adult intestinal stem cells, where they actively regenerate to replace the entire lining of human intestines every 8 days. Their regenerative properties motivated the researchers to explore their potential use in hair cell regeneration in the ear, and they were able to turn the Lgr5+ cells into new hair cells in the live animal in response to a series of signals known as the Wnt pathway, which could be stimulated by a drug treatment.

In the experiments described in Cell Reports, the researchers extracted the Lgr5+ cells from the inner ears of mice, placed them in a dish and used a combination of drugs and growth factors to make them multiply. They then treated the cells with a second drug cocktail to convert the expanded Lgr5+ cells into large populations of hair cells.

Their results identify drugs that will be useful for a combination of first expanding Lgr5+ cells in the inner ear and then converting them to hair cells, opening the door for better therapies to be developed to restore hearing to those with acquired forms of deafness.

“With this knowledge, we can make better shots on goal, which is critical for repairing damaged ears,” said Dr. Edge. “We have identified the cells of interest and have identified the pathways and drugs to target to improve on previous results. These clues may lead us closer to finding drugs that could treat hearing loss in adults.”

About Massachusetts Eye and Ear Mass. Eye and Ear clinicians and scientists are driven by a mission to find cures for blindness, deafness and diseases of the head and neck. Now united with Schepens Eye Research Institute, Mass. Eye and Ear is the world's largest vision and hearing research center, developing new treatments and cures through discovery and innovation. Mass. Eye and Ear is a Harvard Medical School teaching hospital and trains future medical leaders in ophthalmology and otolaryngology, through residency as well as clinical and research fellowships. Internationally acclaimed since its founding in 1824, Mass. Eye and Ear employs full-time, board-certified physicians who offer high-quality and affordable specialty care that ranges from the routine to the very complex. In the 2016–2017 “Best Hospitals Survey,” U.S. News & World Report ranked Mass. Eye and Ear #1 in the nation for ear, nose and throat care and #1 in New England for eye care. For more information about life-changing care and research, or to learn how you can help, please visit MassEyeAndEar.org.