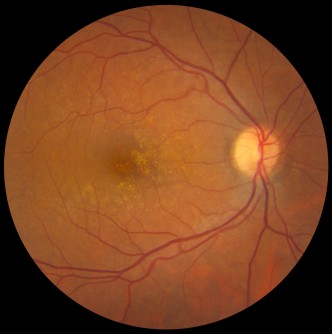 Fundus photo shows a patient with early AMD. Medium-size drusen are visible under the retina. 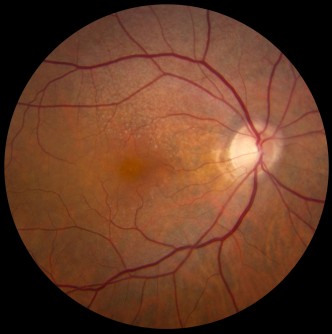 A fundus photo of a patient with reticular pseudodrusen shows a giraffe-like macular pattern.

Newswise — A new clinical study led by the National Eye Institute (NEI), part of the National Institutes of Health, will follow 500 people over five years to learn more about the natural history of early age-related macular degeneration (AMD). By using the latest technologies to visualize structures within the eye and measure their function, researchers hope to identify biomarkers of disease progression, well before it advances to late-stage disease and causes vision loss. AMD is the leading cause of vision impairment and blindness among people age 50 and older in the United States.

“The findings will contribute to our understanding of the underlying biology driving the transition from early to late-stage disease so that therapies can be developed to halt its progression,” said the study’s lead investigator, Emily Y. Chew, M.D., deputy clinical director at NEI and director of the NEI Division of Epidemiology and Clinical Applications. “Treatments that halt the disease at its early stage would have an enormous public health impact.”

People with early AMD typically do not have daylight vision loss. As it progresses, AMD causes cells to die in the retina, the light-sensitive tissue at the back of the eye. Much of the damage occurs in the macula, an area of the retina responsible for sharp, central vision.

Only about 10 to 20 percent of people with early AMD progress to late-stage disease within five years. It is difficult to predict who will progress because AMD is a complex, multifactorial disease influenced by a combination of age, family history, genetic and health behavioral factors. A diet rich in green leafy vegetables and fish, for example, may reduce the risk, while smoking cigarettes increases it.

“We want to better leverage advances in genetics, imaging and visual functioning tests so we can look at early stage disease with more granularity. There may be surrogate markers of an individual’s risk of developing late-stage disease long before the disease progresses,” Dr. Chew said.

The AMD Ryan Initiative Study (ARIS) will track the eye health of 200 people who have bilateral early AMD, defined by the presence of medium-size drusen, yellowish deposits that accumulate under the retina. In addition, ARIS will include 200 people with early, reticular pseudodrusen, a type of lesion that causes the retina to have a giraffe-like macular pattern. The composition and location of the reticular pseudodrusen differ from that of typical drusen. Some data suggest reticular pseudodrusen are associated with a higher than usual risk for progression to late disease, but more research is needed about this group. For comparison, the study will enroll 100 age-matched, drusen-free control participants.

All participants will undergo routine spectral domain optical coherence tomography (SD-OCT), a type of imaging that shows high-resolution, cross-sectional views of the retina. SD-OCT is sensitive enough to detect even small changes in the volume of drusen over time.

In addition, visual function will be measured by dark-adapted fundus perimetry, a test that measures the sensitivity of light perception in specific parts of the retina after a person’s eyes have adapted to the dark. Another visual function test, dark adaption, is useful for evaluating night vision impairment. Dark-adaptation studies are relevant because AMD tends to first damage rod photoreceptors (the retinal cells that allow for vision under dim conditions) earlier than it does cone photoreceptors, which enable daylight vision.

Researchers at each of the 20 ARIS study sites will track drusen volume changes as well as other findings on SD-OCT to see if they correspond to functional changes in visual acuity and dark adaptation.

Ideally, the investigators would like to complement their studies by analyzing the participants’ DNA to look for correlations between genes and AMD progression. In total, scientists have so far identified 52 independent genetic variants associated with AMD. Further research is needed to determine if and how these variants influence the development and progression of the disease.

The clinical study is funded by NEI, with study sites located throughout the United States, the United Kingdom, Australia, Germany and Italy.

The study is named after the late Stephen J. Ryan, M.D., a widely recognized expert in retinal disease and president of the Doheny Eye Institute, an independent non-profit institution supporting ophthalmic research, training and clinical care. The Stephen J. Ryan Initiative for Macular Research is an interdisciplinary program at the Doheny Eye Institute that supports the ARIS investigation.

For more information or to enroll in ARIS, visit clinicaltrials.gov and search for NCT03092492.

About the National Institutes of Health (NIH): NIH, the nation’s medical research agency, includes 27 Institutes and Centers and is a component of the U.S. Department of Health and Human Services. NIH is the primary federal agency conducting and supporting basic, clinical, and translational medical research, and is investigating the causes, treatments, and cures for both common and rare diseases. For more information about NIH and its programs, visit http://www.nih.gov/ (link is external). 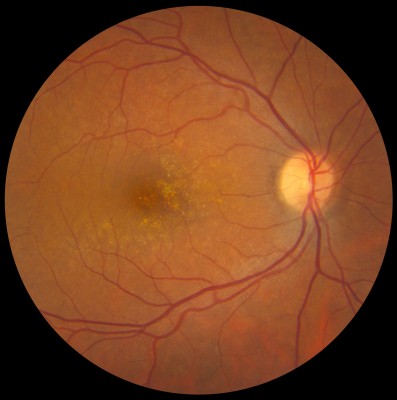 Caption: Fundus photo shows a patient with early AMD. Medium-size drusen are visible under the retina. 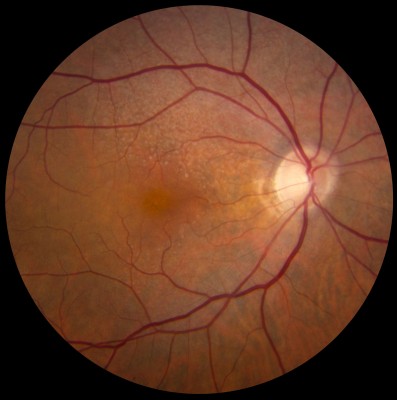 Caption: A fundus photo of a patient with reticular pseudodrusen shows a giraffe-like macular pattern.