Ocean microbes could interact with pollution to influence climate 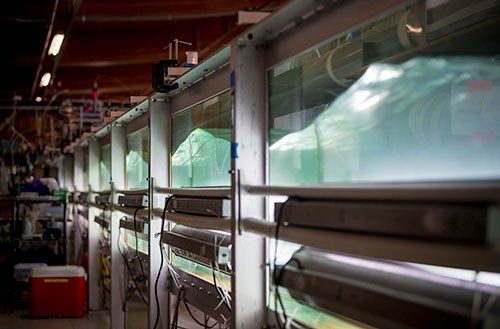 A 108-foot-long “ocean-in-a-lab” reveals how sea spray aerosols could interact with pollutants to influence climate.

Newswise — WASHINGTON, Aug. 17, 2020 — Oceans cover almost three-quarters of the globe, yet little is known about how gases and aerosols made by ocean microbes affect weather and climate, or how human-produced pollution could influence this process. Now, scientists report they’ve used an “ocean-in-a-lab” to show that air pollution can change the makeup of gases and aerosols that sea spray releases into the atmosphere and, in turn, potentially alter weather patterns.

The researchers will present their results today at the American Chemical Society (ACS) Fall 2020 Virtual Meeting & Expo. ACS is holding the meeting through Thursday. It features more than 6,000 presentations on a wide range of science topics.

“It’s surprising that we don’t know more about the central role of ocean microbes in controlling climate,” says Kimberly Prather, Ph.D., the project’s principal investigator. “They have the potential to influence atmospheric composition, cloud formation and weather. Humans can alter these natural processes in two ways: by changing the microbial community structure in the ocean, and by producing air pollutants that react with compounds that the microorganisms produce.”

Through natural biological processes, ocean microbes –– including bacteria, phytoplankton and viruses –– produce compounds that enter the atmosphere as gases or aerosols (tiny water droplets or particles in air that form when waves crash). In addition, the microorganisms themselves can be ejected from the ocean in the form of aerosolized droplets. Some of these particles can seed clouds, absorb or reflect sunlight, or otherwise influence atmospheric conditions and weather.

“There’s a standard belief that one way the ocean can regulate the temperature of the planet is through emission of gases and particles,” says Prather, who holds a joint appointment at the University of California (UC) San Diego’s Scripps Institution of Oceanography and the department of chemistry and biochemistry. “Some scientists refer to the ocean as the ‘planetary thermostat.’”

Prather and colleagues wondered how humans might influence this thermostat. But first, they needed to learn how ocean microbes affect climate without humans. To find out, the researchers built a 108-foot-long wave channel and filled it with 3,400 gallons of seawater. They caused a phytoplankton bloom –– an overgrowth of microscopic algae that occurs naturally in oceans under certain conditions –– in this ocean-in-a-lab. They continuously monitored the gases and aerosols produced in the air above the water, measuring things such as aerosol size, composition, shape, enzymatic activity and pH. They also studied how natural changes in the microbial community, for example, introducing certain species of bacteria and phytoplankton, affected the cloud-forming potential of the aerosols. “The short answer is that the biology had very little effect on sea spray aerosol composition,” Prather says. “Altering natural biological processes in seawater resulted in a very small change in the ability of the primary particles to form cloud droplets.”

In contrast, adding a small amount of an atmospheric oxidant (hydroxyl radical, which can be generated naturally and can be enhanced in polluted atmospheres) caused an immediate shift in the composition and cloud-forming potential of marine aerosols. According to Prather, the oxidant reacted with microbe-produced gases in the air, transforming them into compounds that changed the composition of the primary sea spray aerosol and formed new types of particles. Although the researchers don’t know yet how other individual pollutants affect sea spray aerosols, Prather says that it’s important to study the complete gas phase mixture of pollutants to mimic and understand real-world chemical reactions.

The team is now also exploring how water pollution –– in particular, sewage discharge and pollution run-off that empty into coastal estuaries and oceans –– can restructure microbial communities and affect human health, climate and air quality. Previous studies have examined how human pollution impacts water quality; however, Prather’s are the first studies focusing on how waterborne pollution that enters the surf zone impacts air quality and human health. Her research group is making measurements in the ocean and atmosphere in a region known to be impacted by pollution flowing in from a heavily polluted estuary. This project aims to understand which viruses, bacteria and other pollutants become airborne in the surf zone.

The researchers acknowledge support and funding from the National Science Foundation (NSF) through the NSF Center for Aerosol Impacts on Chemistry of the Environment.

A press conference on this topic will be held Monday, Aug. 17, at 1 p.m. Eastern time online at www.acs.org/fall2020pressconferences.

Title
Impact of ocean microbes on the composition of the marine atmosphere, clouds, and climate

Abstract
Covering 71% of the Earth, the oceans represent a significant source of gases and aerosol particles to our atmosphere. Biological processes in the ocean produce chemical species which can profoundly alter the composition of the atmosphere. Once in the atmosphere, these species can undergo photochemical and chemical reactions which modify their ability to form clouds and impact climate. In the summer of 2019, the NSF Center for Aerosol Impacts on Chemistry of the Environment (CAICE) conducted the Sea Spray Chemistry And Particle Evolution project, or SeaSCAPE, a unique ocean-in-the laboratory experiment which focused on unraveling complex ocean-atmosphere interactions. The focus of the project involves developing a better understanding of how human pollution interacts and reacts with ocean emissions of gases and aerosols – and ultimately affects cloud formation, air quality, and climate. In a 33 m long wave channel filled with 3,400 gallons of seawater, sea spray aerosols and volatile organic carbon gases (VOCs) were continuously measured over the lifecycle of a phytoplankton bloom. Oxidative flow reactors were utilized to simulate different amounts of atmospheric aging of both nascent sea spray aerosols (SSA) and VOCs. The resulting aged SSA and newly formed secondary marine aerosol (SMA) were investigated using a broad suite of complementary on-line and off-line measurements of aerosol number, size, and composition. In addition, other properties including morphology, hygroscopicity, IN activity, phase state, enzymatic activity, and pH were measured. To link changes in the chemistry of the airborne species with seawater biological processes, seawater measurements were made to track the progression of the microbial communities to account for and explain the turnover of organic and inorganic species. As a whole, the SeaSCAPE experiment focuses on capturing how much and how rapidly atmospheric reactions transform ocean-derived biogenic emissions in an effort to unravel the impact of humans on the ocean’s ability to control climate.