New technology could lead to the development of new cancer therapies 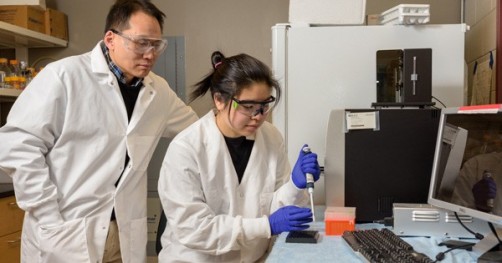 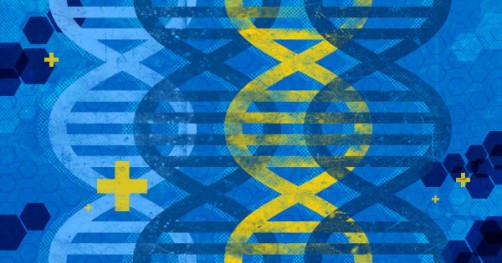 DNA has an important job — it tells your cells which proteins to make. Now, a research team at the University of Delaware has developed technology to program strands of DNA into switches that turn proteins on and off.

Newswise — DNA has an important job – it tells your cells which proteins to make. Now, a research team at the University of Delaware has developed technology to program strands of DNA into switches that turn proteins on and off.

UD's Wilfred Chen Group describes their results in a paper published Monday, March 12 in the journal Nature Chemistry. This technology could lead to the development of new cancer therapies and other drugs.

This project taps into an emerging field known as DNA computing. Data we commonly send and receive in everyday life, such as text messages and photos, utilize binary code, which has two components – ones and zeroes. DNA is essentially a code with four components, the nucleotides guanine, adenine, cytosine, and thymine. In cells, the arrangement of these four nucleotides determines the output – the proteins made by the DNA. Here, scientists have repurposed the DNA code to design logic-gated DNA circuits.

"Once we had designed the system, we had to first go into the lab and attach these DNA strands to various proteins we wanted to be able to control," said study author Rebecca P. Chen, a doctoral student in chemical and biomolecular engineering (no relation to Wilfred Chen). The custom sequence designed DNA strands were ordered from a manufacturer while the proteins were made and purified in the lab. Next, the protein was attached to the DNA to make protein-DNA conjugates.

The group then tested the DNA circuits on E. coli bacteria and human cells. The target proteins organized, assembled, and disassembled in accordance with their design.

"Previous work has shown how powerful DNA nanotechnology might possibly be, and we know how powerful proteins are within cells," said Rebecca P. Chen. "We managed to link those two together."

The team also demonstrated that their DNA-logic devices could activate a non-toxic cancer prodrug, 5-fluorocytosine, into its toxic chemotherapeutic form, 5-fluorouracil. Cancer prodrugs are inactive until they are metabolized into their therapeutic form. In this case, the scientists designed DNA circuits that controlled the activity of a protein that was responsible for conversion of the prodrug into its active form. The DNA circuit and protein activity was turned "on" by specific RNA/DNA sequence inputs, while in the absence of said inputs the system stayed "off."

To do this, the scientists based their sequence inputs on microRNA, small RNA molecules that regulate cellular gene expression. MicroRNA in cancer cells contains anomalies that would not be found in healthy cells. For example, certain microRNA are present in cancer cells but absent in healthy cells. The group calculated how nucleotides should be arranged to activate the cancer prodrug in the presence of cancer microRNA, but stay inactive and non-toxic in a non-cancerous environment where the microRNA are missing. When the cancer microRNAs were present and able to turn the DNA circuit on, cells were unable to grow. When the circuit was turned off, cells grew normally.

This technology could have wide applications not only to other diseases besides cancer, but also beyond the biomedical field. For example, the research team demonstrated that their technology could be applied to the production of biofuels, by utilizing their technology to guide an enzymatic cascade, a series of chemical reactions, to break down a plant fiber.

"This is based on a very simple concept, a logical combination, but we are the first to make it work," he said. "It can address a wide scope of problems, and that makes it very intriguing."

Chen has published more than 240 journal papers and delivered over 90 invited lectures. He serves on the editorial board for eight scientific journals and is the winner of the 2015 Daniel I.C. Wang Award from AICHE/ACS and the 2017 Marvin J. Johnson Award from ACS.