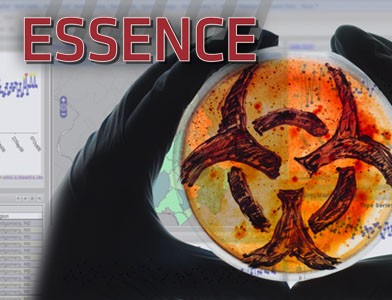 Johns Hopkins APL’s Wayne Loschen discusses the Lab’s ESSENCE (Electronic Surveillance System for the Early Notification of Community-based Epidemics) technology, which collects health indicators from a variety of sources, analyzes the data and notifies users when statistical anomalies occur — such as at the onset of epidemics.

Newswise — Federal government and state public health officials are leveraging a disease surveillance system developed by the Johns Hopkins University Applied Physics Laboratory (APL) in Laurel, Maryland, to better track opioid-related deaths. It is the latest application of the Electronic Surveillance System for the Early Notification of Community-based Epidemics (ESSENCE), which has also been used to predict and respond to outbreaks of infectious diseases, to monitor mass gatherings, and even to assist in disaster recovery efforts.

The power of ESSENCE is that it helps public health officials better understand what’s going on in their communities, develop appropriate responses and, ultimately, save lives, said Wayne Loschen, a software engineer and ESSENCE project manager in APL’s National Health Mission Area.

According to the Centers for Disease Control and Prevention (CDC), 91 Americans die every day from an opioid overdose, and “in many regions in the Unites States, the opioid abuse crisis is worsening despite mitigation efforts,” notes Loschen. Epidemiologists are increasingly relying on electronic disease surveillance systems — such as ESSENCE — to get a better understanding of the scope of the opioid abuse.

“When accurate and reliable data sources are made available to electronic disease surveillance systems, such as ESSENCE, public health specialists can provide a more comprehensive picture of fatal and nonfatal opioid overdose case counts, as well as time trends, and high-risk regions,” Loschen said. “This complete picture of the full burden of the opioid abuse crisis will help officials appropriately implement prevention and response measures and better direct resources.”

APL’s work in global health surveillance is entering its third decade and focuses on all phases of the surveillance time line — from prediction of a potential outbreak through response and communication efforts.

“Advances in information technology are enabling us to develop new analytic models for early detection, not just of diseases but other situations — such as drug abuse — that threaten large populations,” said Sezin Palmer, who heads up the Laboratory’s National Health Mission Area.

To learn more about ESSENCE, watch “Inside ESSENCE: Providing early detection of epidemics” and “ESSENCE: Early Notification of Epidemics.”