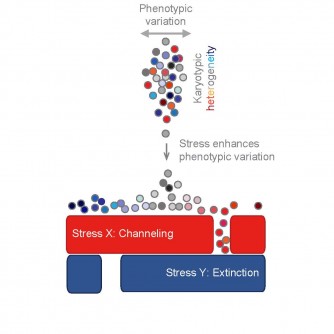 Newswise — Kansas City, MO. — Cancer is a notoriously evasive disease. It can adopt multiple identities, accumulating mutations or even gaining or losing whole chromosomes to create genetic variants of itself that are resistant to whatever drug is thrown its way.

This ability to evolve to changing conditions and new therapies can turn cancer care into a game of whack-a-mole, as clinicians hit cancer cells with one treatment after another only to have new drug resistant forms pop up.

Now, using theoretical and experimental approaches, researchers at the Stowers Institute for Medical Research have developed a two-pronged strategy that uses an evolving cell population’s adaptive nature against it. First, the method was designed to steer the cell population into one evolutionary path, shutting off the other openings where it might rear its ugly head. Once the cells are trapped in this way, the method then positions its hammer over the single remaining target, knocking out the cell population for good.

The new approach, which the researchers call an “evolutionary trap,” was reported February 12, 2015 in Cell. The strategy may potentially be applied not just to cancer treatment but also to other clinical scenarios where drug resistance is a problem, such as fungal infections.

“We know evolution is the creative force that shapes living organisms,” says Stowers Investigator Rong Li, Ph.D., who led the study. “But too often we think about organisms as machines, like they are built by a blueprint and are never going to change. In fact, when we are dealing with cancers or pathogenic organisms we are faced with systems that continuously adapt and change so that they are moving targets. We need to develop treatments that stop them from evolving altogether.”

Li has long been interested in how cells evolve, and she has spent years investigating the types of genetic variants that quickly emerge when cells are stressed. Recently, she found that the first and most effective change that evolving cells undergo is to gain or lose a chromosome, a condition known as aneuploidy. By basically scrambling the dosage of the genes carried on these chromosomes, cells can take on new characteristics needed to survive under changing conditions.

Li wondered if it was possible to turn cancer’s rapidly evolving nature into a weakness.

“The idea of an evolutionary trap involves training the population so that it has reduced adaptability” says Li. “You take a heterogeneous population of cells and treat it with a drug so that only one specific type of genetic variant will survive. The entire population may be good at growing under that condition, but its homogeneity becomes its Achilles heel. Then you target that by throwing in a second drug to drastically switch the conditions.”

Guangbo Chen, a recently graduated Ph.D. student in Li’s lab, tested this approach in a proof-of-principle study. First, he constructed a yeast population that mimics the diversity observed in fungal pathogens or human cancers. He treated the budding yeast with high concentrations of radicicol, a natural antibiotic and antifungal that kills all forms of the yeast except those that have gained an extra copy of chromosome XV. Chen then searched for pharmaceuticals that were effective against this chromosome XV gain, landing on a drug called hygromycin B. He found that treating the yeast with a combination of both the drugs effectively wiped out all of the cultures. The researchers then wanted to see if this evolutionary trap strategy could improve treatment in situations where antifungals have failed. The human pathogen Candida albicans becomes resistant to the common antifungal drug fluconazole by acquiring an extra arm of chromosome 5. Chen and his colleagues screened over a thousand FDA-approved drugs for those effective against this chromosomal abnormality in a sample of Candida albicans isolated from a patient with fluconazole resistance. They showed that the drug pyrvinium pamoate, which is used to treat pediatric pinworm infections, suppressed the growth of the fungus when combined with fluconazole.

“Many diseases that evolve drug resistance involve cell populations with different chromosome copy numbers. Here we have shown that aneuploidy can be used as a drug target,” says Chen, who is lead author of the study.

Chen and Li have also proposed the design of an evolutionary trap against glioblastoma, the most common and deadliest primary brain tumor in adults. Nearly all glioblastoma tumors carry an extra arm or entire copy of chromosome 7, and specific anti-cancer drugs called EGFR inhibitors are likely to further select for this type of aneuploidy. This additional genetic material has also been detected in lung cancers that have developed resistance to specific anti-cancer drugs like gefitinib and erlotinib. By analyzing a large brain tumor dataset containing both chromosome copy number and drug sensitivity information, the researchers found a drug called irinotecan, already approved for use in colon cancer, which may be toxic to cancer cells with chromosome 7 gain.

“Hopefully our study is just the beginning,” says Li. “There is a vast amount of data that we can mine for other drug pairs with the potential to form evolutionary traps on cancer. I am particularly interested in looking deeper into whether we can apply this strategy to clinical treatment, and plan to collaborate with clinicians to figure out ways we can test this approach.”

The work was funded by the Stowers Institute for Medical Research and a grant from the National Institutes of Health (National Institute of General Medicine Sciences award R01GM059964). The content is solely the responsibility of the authors and does not necessarily represent the official views of the NIH.

Cancers and human pathogens rapidly evolve and adapt to their surrounding environment -- accumulating genetic changes and even gaining or losing entire chromosomes -- to develop drug resistance. In the current issue of the scientific journal Cell, Stowers Institute scientists report a new strategy to combat drug resistance by hijacking the evolutionary process. Stowers Investigator Rong Li, Ph.D., who led the study, explains that this “evolutionary trap” uses one drug to steer a population of cells down a single evolutionary path, and then a second drug to target the trapped population. In the study, Li and her colleagues explored the feasibility of the approach against a fungal pathogen and predicted its possible efficacy toward certain human cancers.