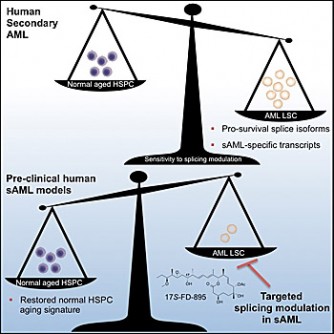 Secondary AML typically follows a chronic pre-malignant disease or treatment for other cancers. Consequently, patients tend to be diagnosed later in life, usually after the age of 60.

“Because of relatively low survival rates and their advancing age, these patients tend to be poor candidates for aggressive therapies, like a bone marrow transplant,” said senior author Catriona Jamieson, MD, PhD, professor of medicine, chief of the Division of Regenerative Medicine at UC San Diego School of Medicine and director of the Stem Cell Research Program at Moores Cancer Center. “There is a pressing need for more effective treatments that prevent disease progression and relapse.”

Aging is a key risk factor for sAML because, over time, hematopoietic stem cells (which give rise to all other blood cell types) accumulate DNA mutations and changes in other molecules that put DNA instructions into action, such as RNA and proteins.

Jamieson’s team wanted to understand how RNA might change with the aging of normal blood stem cells compared with sAML stem cells. “By being able to distinguish benign from malignant aging based on distinctive RNA splicing patterns, we can develop therapeutic strategies that selectively target leukemia stem cells while sparing normal hematopoietic stem cells,” she said.

Leslie Crews, PhD, assistant project scientist in Jamieson’s lab and co-first author with Larisa Balaian, PhD, project scientist, said the team “specifically looked at a process called RNA splicing, which is responsible for removing pieces of extraneous RNA that do not contain instructions to make protein. If disrupted, RNA splicing could enhance the capacity of cells to propagate cancer.”

The researchers also tested a small molecule splicing modulator compound derived from a natural product and developed in the lab of Michael Burkart, PhD, professor in the Department of Chemistry and Biochemistry at UC San Diego.

“While genetic and proteomic tools can address the mechanisms of splicing at a global level, small molecule modulators allow the selective examination of splicing mechanism,” said Burkart. “This work was enabled by our ability to prepare stable analogs of natural products that modulate the spliceosome and represents more than 10 years of effort into synthetic and medicinal chemistry.

“We are optimistic that these findings will support our long term goal of delivering a clinical candidate to combat blood-borne cancer. Furthermore, we see these materials as important probes to dissect the complex yet important mechanics of disease related splicing events.

Crews noted that RNA splicing-targeted agents have been shown to have activity in a variety of solid tumors so the findings may be relevant to a variety of cancers, such as breast and drug-resistant melanoma.

Funding for this research came, in part, from The Leukemia & Lymphoma Society, the Moores Foundation, the Mizrahi Family Foundation, the Sanford Stem Cell Clinical Center, the National Institutes of Health (P30-CA 023100, R21 CA 189705, CA 078902, CA 018029), the Federico Foundation, the UC San Diego AML Research Fund, and the Office of the Assistant Secretary of Defense for Health Affairs.