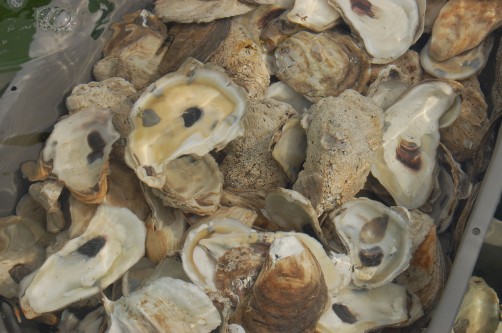 In a major breakthrough in shellfish management and disease prevention, UNH has applied for a patent for a new method of detecting a bacterium that has contaminated New England oyster beds and sickened consumers who ate the contaminated shellfish. 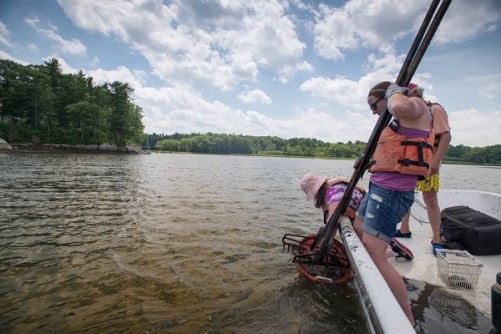 In Great Bay, a team of undergraduate and graduate students collect oysters to look at environmental conditions that might favor V. parahaemolyticus.

DURHAM, N.H. – In a major breakthrough in shellfish management and disease prevention, researchers at the University of New Hampshire have discovered a new method to detect a bacterium that has contaminated New England oyster beds and sickened consumers who ate the contaminated shellfish. The new patent-pending detection method – which is available for immediate use to identify contaminated shellfish – is a significant advance in efforts to identify shellfish harboring disease-carrying strains of Vibrio parahaemolyticus.

“Since 2012, the Northeast has been experiencing an ongoing outbreak caused by a non-native strain of V. parahaemolyticus that is endemic to the Pacific Northwest. A significant challenge for managing shellfish harvesting to prevent infections is that we were previously unable to tell the difference between this strain and harmless residents. The new detection platform will provide rapid, and more importantly, specific quantification of the invasive strain, we hope allowing more effective management of harvesting that will protect this important regional industry,” said Cheryl Whistler, associate professor of molecular, cellular, and biomedical sciences.

The new detection method was developed by Whistler; Steve Jones, research associate professor of natural resources and the environment; and Vaughn Cooper, associate professor of molecular, cellular, and biomedical sciences. It was developed using genome sequencing and analysis. The research is presented in the forthcoming issue of the Journal of Clinical Microbiology in the article “Use of Whole Genome Phylogeny and Comparisons in the Development of a Multiplex-PCR Assay to Identify Sequence Type 36 Vibrio parahaemolyticus.”

V. parahaemolyticus isthe most common bacterial infection acquired from seafood in the world. There are an estimated 35,000 cases each year in the United States. In recent years, there has been an increase in the incidence of shellfish contamination, which has caused costly recalls of shellfish and shellfish bed closures in Connecticut and Massachusetts. Some strains of the microbe cause disease and others do not.

Whistler said the new detection method is available for immediate use, and can benefit researchers and managers, food inspectors, wholesalers, and retailers. It could form the basis for a diagnostic test for widespread use in both environmental detection and clinical diagnosis. In addition to enabling the research community, the UNHInnovation office will be seeking a partner to license the patent-pending innovation for commercial applications.

“New ideas that create jobs and healthy communities are among the many advancements that have made the United States the leading economic power in the world. Much of this innovation takes place at top research universities like UNH. This patent and the research that led to it underscores the need for continued federal investments in scientific research that will allow the United States to remain an innovation leader,” said Jan Nisbet, senior vice provost for research at UNH.

The new detection method identifies the Atlantic ST36 strain of the bacterium. UNH researchers used genotyping and whole genome DNA sequencing at the UNH Hubbard Center for Genome Studies on 94 clinical isolates collected from 2010 to 2013 in Massachusetts, New Hampshire, and Maine. They determined that it is this particular strain of the bacterium that has been responsible for the bulk of the Vibrio outbreaks in the Northeast in recent years. Researchers were able to identify specific genes found only in the invasive strain.

Details on the regional pathogens used to develop the new detection method are presented in the April issue of Frontiers in Microbiology in the article “Genetic characterization of clinical and environmental Vibrio parahaemolyticus from the Northeast USA reveals emerging resident and non-indigenous pathogen lineages.”

The research has been funded for multiple years by the NH Agricultural Experiment Station (NHAES), which receives support from the U.S. Department of Agriculture. Scientists also received support from NH Sea Grant, which is funded by National Oceanic and Atmospheric Administration, the UNH College of Life Sciences and Agriculture, UNH School of Marine Science and Ocean Engineering, National Institutes of Health, and National Science Foundation Experimental Program to Stimulate Competitive Research (EPSCoR).

“This important breakthrough is an example of the critical need to support a strong research portfolio that spans the range from solving immediate issues to developing fundamental knowledge about the agricultural, food, and environmental systems that are central to the experiment station’s mission. At some point, the information we derive from what is commonly termed basic research becomes critical to solving new problems as they arise,” said Jon Wraith, dean of the UNH College of Life Sciences and Agriculture and director of the NH Agricultural Experiment Station.

The presence of pathogenic V. parahaemolyticus is rare in the Northeast as cooler water temperatures protect against bacterial growth. However, with the regions’ rise in ocean temperatures and unusually heavy, intermittent rainstorms, conditions have changed over time, generating a host of problems that impact people’s health and the economy.

In the 1980s, UNH scientists were the first to detect Vibrio vulnificus – a potentially more serious species of Vibrio – north of Long Island Sound. Since then Vibrios have been studied throughout the shellfish and waters of the Great Bay Estuary.

Founded in 1887, the NH Agricultural Experiment Station at the UNH College of Life Sciences and Agriculture is UNH’s original research center and an elemental component of New Hampshire's land-grant university heritage and mission. We steward federal and state funding, including support from the USDA National Institute of Food and Agriculture, to provide unbiased and objective research concerning diverse aspects of sustainable agriculture and foods, aquaculture, forest management, and related wildlife, natural resources and rural community topics. We maintain the Woodman and Kingman agronomy and horticultural farms, the Macfarlane Greenhouses, the Fairchild Dairy Teaching and Research Center, and the Organic Dairy Research Farm. Additional properties also provide forage, forests and woodlands in direct support to research, teaching, and outreach.

The University of New Hampshire, founded in 1866, is a world-class public research university with the feel of a New England liberal arts college. A land, sea, and space-grant university, UNH is the state's flagship public institution, enrolling 13,000 undergraduate and 2,500 graduate students.

PHOTOS AVAILABLE FOR DOWNLOAD https://colsa.unh.edu/sites/colsa.unh.edu/files/oysters2.jpg In a major breakthrough in shellfish management and disease prevention, UNH has applied for a patent for a new method of detecting a bacterium that has contaminated New England oyster beds and sickened consumers who ate the contaminated shellfish. Credit: NH Sea Grant

https://colsa.unh.edu/sites/colsa.unh.edu/files/rawoysters.jpg V. parahaemolyticus isthe most common bacterial infection acquired from seafood in the world. There are an estimated 35,000 cases each year in the United States. Credit: UNH Research 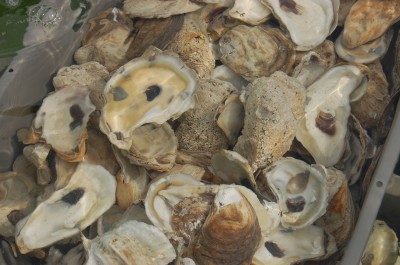 Caption: In a major breakthrough in shellfish management and disease prevention, UNH has applied for a patent for a new method of detecting a bacterium that has contaminated New England oyster beds and sickened consumers who ate the contaminated shellfish. 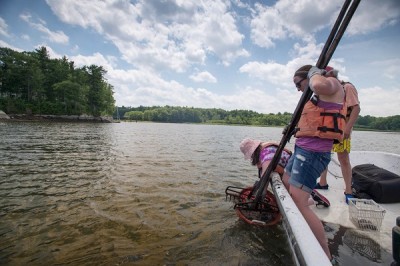 Caption: In Great Bay, a team of undergraduate and graduate students collect oysters to look at environmental conditions that might favor V. parahaemolyticus.