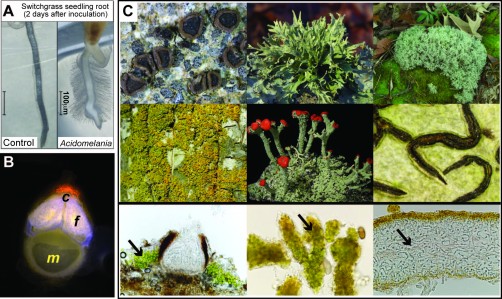 (A) Switchgrass root hair growth promotion in the presence of the dark septate endophyte (DSE) fungus, Acidomelania panicicola. Warm season C4 grasses such as switchgrass rely on their symbiome to persist in stressful environments such as the Pine Barrens of New Jersey, USA. (B) Symbiosis between the water fern Azolla and the cyanobacterium Anabaena that involves vertical inheritance of the cyanobacterium via the mega-spore apparatus of the water fern. This is a transverse section of the megaspore apparatus that shows the megaspore (m), the floats (f), and the cyanobacteria (c; red region at the top of the megaspore apparatus). (C) Examples of the obligate lichen symbiosis. Top two rows show examples of lichen species present in the southern Appalachian Mountains. The lower row shows light micrographs of different types of algal associations (indicated with arrows, from L to R: Trebouxia, Trentepohlia, Nostoc) in lichen thalli. 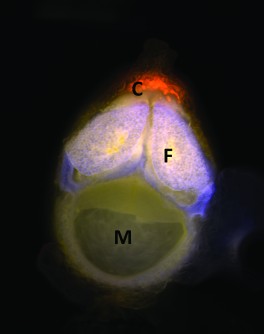 Symbiosis between the water fern Azolla and the cyanobacterium Anabaena that is vertically inherited via the fern mega-spore apparatus. This is a transverse section showing the megaspore (M), floats (F), and cyanobacteria (C; red region). 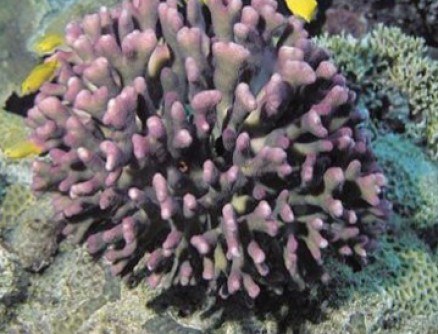 The coral Stylophora has a symbiotic relationship with photosynthetic dinoflagellate algae. The coral body is also full of myriad microbes.

Newswise — In 1859, Charles Darwin included a novel tree of life in his trailblazing book on the theory of evolution, On the Origin of Species. Now, scientists from Rutgers University-New Brunswick and their international collaborators want to reshape Darwin’s tree.

A new era in science has emerged without a clear path to portraying the impacts of microbes across the tree of life. What’s needed is an interdisciplinary approach to classifying life that incorporates the countless species that depend on each other for health and survival, such as the diverse bacteria that coexist with humans, corals, algae and plants, according to the researchers, whose paper is published online today in the journal Trends in Ecology and Evolution.

“In our opinion, one should not classify the bacteria or fungi associated with a plant species in separate phylogenetic systems (trees of life) because they’re one working unit of evolution,” said paper senior author Debashish Bhattacharya, distinguished professor, Department of Ecology, Evolution and Natural Resources, in the Rutgers School of Environmental and Biological Sciences. “The goal is to transform a two-dimensional tree into one that is multi-dimensional and includes biological interactions among species.”

A tree of life has branches showing how diverse forms of life, such as bacteria, plants and animals, evolved and are related to each other. Much of the Earth’s biodiversity consists of microbes, such as bacteria, viruses and fungi, and they often interact with plants, animals and other hosts in beneficial or harmful ways. Forms of life that are linked physically and evolve together (i.e. are co-dependent) are called symbiomes, the paper says.

The authors propose a new tree of life framework that incorporates symbiomes. It’s called SYMPHY, short for symbiome phylogenetics. The idea is to use sophisticated computational methods to paint a much broader, more inclusive picture of the evolution of organisms and ecosystems. Today’s tree of life fails to recognize and include symbiomes. Instead, it largely focuses on individual species and lineages, as if they are independent of other branches of the tree of life, the paper says.

The authors believe that an enhanced tree of life will have broad and likely transformative impacts on many areas of science, technology and society. These include new approaches to dealing with environmental issues, such as invasive species, alternative fuels and sustainable agriculture; new ways of designing and engineering machinery and instruments; enlightened understanding of human health problems; and new approaches to drug discovery.

“By connecting organisms to their microbial partners, we can start detecting patterns of which species associate under specific ecological conditions,” Bhattacharya said. “For example, if the same microbe is associated with the roots of very different plants that all share the same kind of habitat (nutrient-poor and high in salt, for example), then we have potentially identified a novel lineage that confers salt and stress tolerance and could be used to inoculate crop plants to provide this valuable trait.”

In general, any question that would benefit from the knowledge of species associations in symbiomes could be addressed using SYMPHY, he said.

“We’d actually have trees interacting with trees, and that sort of network allows you to show connections across multiple different organisms and then portray the strength of the interactions between species,” he said.

“What we wish to clearly stress is that we are not engaged in Darwin-bashing. We consider Darwin a hero of science,” Bhattacharya said. “New technologies have brought radical new insights into the complex world of microbial interactions that require a fresh look at how we classify life forms, beyond classical two-dimensional trees.”

“We should also aim to unify systematics (methods of classifying life) research under the SYMPHY umbrella so that departments with different specialties, such as zoology, botany, microbiology and entomology, work together to portray how biotic interactions impact species evolution, ecology, and organismal biology in general,” he added.