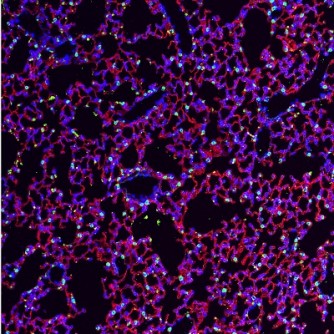 “We believe that ours is the first study to demonstrate a beneficial effect of lung-directed resveratrol treatments on aging lung function,” said Driscoll.

Resveratrol (RSL), a chemical found in red wine, is an antimicrobial chemical substance produced by plants to protect against infection and stress-related changes. It has previously been shown to support muscle metabolism when delivered orally.

RSL prophylaxis by inhalation was a novel measure taken by the research team as a potential approach for slowing age-related deterioration of lung function and structure by preserving alveolar epithelial type 2 cells (AEC2) which line alveoli (the tiny air sacs in the lungs through which the exchange of oxygen and carbon dioxide takes place) and produce surfactant which is vital for efficient breathing.

In healthy young adults, breathing is an essential, efficient process, but natural aging of the lung occurs at a steady and irreversible rate, as measured by a decline in lung function. This natural deterioration leads to a significantly reduced quality of life, over a time frame dependent on genetic and environmental factors. Although some available therapies can ameliorate symptoms, aging-related lung failure is generally irreversible and is accompanied by high rates of morbidity and mortality due to increased disease risk, including development of COPD, with accompanying emphysema and chronic bronchitis.

Using a rapidly aging mouse model, the research team investigated whether the accumulation of age-related degenerative changes in the lung could be slowed by inhaled RSL. Treatment cohorts received either RSL or vehicle by intratracheal (IT) instillation monthly for three months. One month following the final treatment, whole lung function and injury-related gene expression in AEC2 were assessed.

The research team found that inhaled, prophylactic resveratrol treatments can slow the rate of lung function decline, alveolar enlargement and alveolar epithelial type 2 cell DNA damage that occurs in the early stages of lung aging. They concluded that administration of resveratrol directly to the lungs may be an effective intervention for lung aging, which is a significant risk factor for development of chronic lung disease.

“While the natural deterioration of the human lung generally occurs over decades, the injury to lung cells is analogous to the lung cell damage that occurs in premature infants who experience respiratory distress before their lungs have fully developed,” added Driscoll. “Identifying a way to protect and strengthen young lungs before significant damage occurs is the goal of our research.”

About Children’s Hospital Los AngelesChildren's Hospital Los Angeles has been named the best children’s hospital in California and among the top 10 in the nation for clinical excellence with its selection to the prestigious U.S. News & World Report Honor Roll. Children’s Hospital is home to The Saban Research Institute, one of the largest and most productive pediatric research facilities in the United States. Children’s Hospital is also one of America's premier teaching hospitals through its affiliation since 1932 with the Keck School of Medicine of the University of Southern California. For more information, visit CHLA.org. Follow us on Twitter, Facebook, YouTube and LinkedIn, or visit our blog at http://researchlablog.org/.