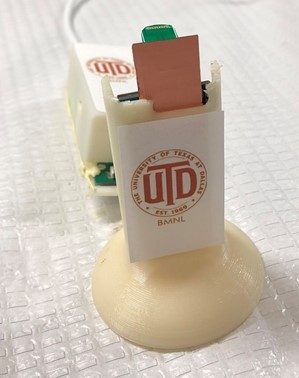 A new device could someday be used to detect marijuana intoxication at roadside stops.

Newswise — WASHINGTON, March 30, 2020 — In the U.S., those who consume alcohol and drive are often subjected to roadside stops, breathalyzer tests and stiff penalties if their blood alcohol content exceeds certain limits. Currently, no such test exists for cannabis intoxication, although the substance is known to impair driving, among other activities. Scientists now report that they are one step closer to a convenient saliva test for measuring cannabis levels at roadside stops.

The researchers are presenting their results through the American Chemical Society (ACS) SciMeetings online platform.

A brand-new video on the research is available at www.acs.org/philly-2020-thc.

“People have the perception that driving after smoking marijuana is safer than driving drunk, but both substances can have similar effects, such as slowed reaction time, diminished alertness and reduced self-awareness,” says Shalini Prasad, Ph.D., who led the study. However, unlike alcohol, the blood level of the psychoactive compound in marijuana, tetrahydrocannabinol (THC), that constitutes impairment has not been well characterized. “This is an emerging field, but preliminary clinical reports suggest that anywhere above 1 to 15 nanograms of THC per milliliter of blood is considered a level of impairment,” Prasad says.

As more U.S. states decriminalize marijuana, law enforcement agencies are grappling with how to keep the roads safe from drivers who are high. Blood tests for THC, while accurate, are time-consuming and invasive, and many police officers lack the skills to perform such tests at roadside stops. Some researchers are working on devices that measure THC levels in breath (similar to a breathalyzer for alcohol), but according to Prasad, levels of the substance are low in breath, requiring extensive, error-prone data processing to filter out effects of other compounds. Because THC in saliva correlates closely with that in blood, Prasad and colleagues wanted to develop a simple, quick and accurate saliva test for the compound.

To do so, the researchers, who are at the University of Texas at Dallas, engineered THC sensor strips and an electronic reader. The sensor strips, which contained two electrodes, were coated with an antibody that binds THC so that the substance could be isolated from the many other compounds in saliva. “We used the antibody so that we could really only look at the needle in the haystack,” Prasad says. To perform the test, the researchers added a tiny drop of human saliva spiked with THC to the strip and inserted it into the electronic reader, which applied a specific voltage. When THC attached to the antibody, the electrical current changed because of polarization that occurred between the interacting antibody and THC surfaces. The e-reader converted these data into THC concentration.

The researchers found that the device was accurate for THC levels ranging from 100 picograms per milliliter to 100 nanograms per milliliter. “This is the first demonstration of a prototype device that can report both low and high concentrations of THC in a noninvasive, highly sensitive and specific manner,” Prasad says. The new test is also fast, requiring less than five minutes to complete from start to finish. In contrast, other saliva tests for cannabis must be performed in a lab, requiring trained personnel and time-consuming sample processing steps, such as dilution and buffer adjustments.

Because cannabis is illegal in Texas, the researchers haven’t been able to analyze saliva from people who have actually smoked marijuana. Instead, they’ve used saliva samples spiked with THC. But Prasad says she has seen a lot of interest from researchers in states where cannabis is legal who want to collaborate, as well as from local law enforcement agencies.

Now, the researchers are taking the saliva test out of the lab. They’ve made a field-deployable version of the device that is similar in size to the glucose monitors diabetics use. In preliminary testing, they’ve shown that they can obtain saliva from human volunteers through a simple cheek swab, spike the saliva with different concentrations of THC and perform the test in a setting similar to a roadside stop.

Prasad says that the new test is also likely to find applications outside of law enforcement. For example, the medical marijuana community has shown interest, as well as companies that develop lifestyle devices to help people manage their cannabis consumption. In addition, lawmakers and regulatory groups are interested in using data generated by the device to develop effective laws.

The researchers acknowledge funding from the University of Texas at Dallas.

Abstract
Marijuana is listed as a Schedule I substance under the American Controlled Substances Act of 1970. As more U.S. states and countries beyond the U.S. seek legalization, demands grow for identifying individuals driving under the influence (DUI) of marijuana. Currently no roadside DUI test exists for determining marijuana impairment, thus the merit lies in detecting the primary and the most sought psychoactive compound tetrahydrocannabinol (THC) in marijuana. Salivary THC levels are correlated to blood THC levels making it a non-invasive medium for rapid THC testing. Affinity biosensing is leveraged for THC biomarker detection through the chemical reaction between target THC and THC specific antibody to a measure signal output related to the concentration of the targeted biomarker. Here, we propose a novel, rapid, electrochemical biosensor for the detection of THC in saliva as a marijuana roadside DUI test with a lower detection limit of 100 picogram per milliliter and a dynamic range ranging from 100 picogram per milliliter to 100 nanogram per milliliter in human saliva. The developed biosensor is the first of its kind to utilize affinity-based detection through impedimetric measurements with a rapid detection time of less than a minute. Fourier transform infrared spectroscopy analysis confirmed the successful immobilization of the THC immobilization assay on the biosensing platform. Zeta potential studies provided information regarding the stability and the electrochemical behavior of THC immunoassay in varying salivary pH buffers. We have demonstrated stable, dose dependent biosensing in varying salivary pH’s. The biosensor on integration with low-power electronics and a portable saliva swab serves as a roadside DUI hand-held platform for rapid identification of THC in saliva samples obtained from human subjects.