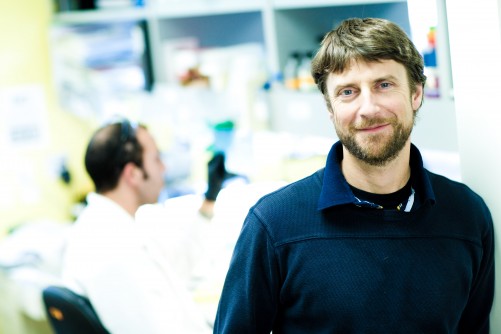 Newswise — La Jolla, Calif., September 26, 2017 – Sanford Burnham Prebys Medical Discovery Institute (SBP) is pleased to announce the National Institute on Drug Abuse (NIDA) at the National Institutes of Health (NIH) has awarded Nicholas Cosford, Ph.D., a three-year, $10.8 million grant to pursue the preclinical development of a new class of medicine to treat substance use disorders. Cosford will be leading a multidisciplinary team of experienced scientists at SBP, UC San Diego, and Camino Pharma, LLC who have a proven track record of drug discovery.

“We will be working on a novel class of drugs that target the metabotropic glutamate receptor 2 (mGlu2),” says Cosford, professor at SBP’s NCI-Designated Cancer Center and director of Translational Research. “Experimental evidence has linked cocaine and nicotine-seeking and relapse behavior with increases in glutamate neurotransmission in the brain. Our objective is to reduce glutamate neurotransmission with drugs called positive allosteric modulators (PAMs) that interact with specific glutamate receptors.

The grant will allow Cosford’s team to move forward with studies of the effectiveness of their lead compound, SBP-0069330, which has been selected based on favorable drug-like properties including oral bioavailability, brain penetration and efficacy in valid animal models of substance abuse.

“We are enthusiastic about the prospects of developing this novel drug to treat people who suffer from substance use disorders,” says Robert Anthenelli, M.D., professor of Psychiatry at UC San Diego, and collaborator for the study. “Cocaine addiction remains a major public health problem without any FDA-approved medications for treatment. Cigarette smoking, the largest preventable cause of morbidity and mortality among adults worldwide, has several FDA-approved medications to reduce nicotine cravings and withdrawal, but there is a need for more effective options.”

“Tobacco smoking is by far the leading cause of lung cancer, and hence the development of a medication for nicotine addiction is also entirely consistent with our mission to cure deadly cancer.

“Our next steps are to further characterize our lead compound, identify back-up candidates, and complete the preclinical studies required prior to filing an Investigational New Drug (IND) Application which will enable us to begin clinical trials in humans,” adds Cosford.

Nicholas Cosford is co-founder and head of Drug Discovery at Camino Pharma LLC.