Scientists Discover Curious Clues in the War Between CF Bacteria

In a new study, the UNC School of Medicine lab of Peggy Cotter, PhD, describe in detail the different weaponry bacteria use to establish infection in the lungs of people with cystic fibrosis, depending on their age. 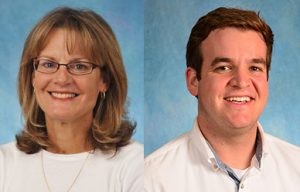 Newswise — Several different kinds of bacteria can cause lung infections in people with cystic fibrosis (CF). Pseudomonas aeruginosa, which can cause pneumonia, typically infects infants or young children and persists for life, while Burkholderia cepacia complex species only infect teenagers and adults. Although Burkholderia infections are rare, when they do take hold, they are deadly. Now, UNC School of Medicine scientists led by Peggy Cotter, PhD, professor in the UNC Department of Microbiology and Immunology, have discovered a reason for this pathogen’s apparent age discrimination.

This research, published in the journal Cell Host & Microbe, shows that both Pseudomonas and Burkholderia use toxic weaponry, called Type VI Secretion Systems (T6SS), to compete with and establish dominance over each other. It’s possible that scientists could target, or mimic, this weaponry to defeat the bacteria before they cause irreparable harm to lungs of patients.

Scientists have wondered for a long time why Burkholderia does not infect infants and young children. First author and former Cotter Lab graduate student Andrew Perault, MPH, PhD, designed and conducted experiments to show that Pseudomonas bacteria isolated from infants and young children use their harpoon-like T6SS to fire toxins at, and kill, competitor bacteria, including Burkholderia.

“This may be one of the reasons Burkholderia does not take root in young patients,” Cotter said. “Andy showed that although Burkholderia also produce T6SSs, they cannot effectively compete with Pseudomonas isolates taken from young CF patients.”

However, as those Pseudomonas bacteria adapt to living in the lungs of CF patients, they lose their ability to produce T6SSs and to fight with Burkholderia. The Burkholderia, using their own T6SSs, are then able to kill the Pseudomonas and establish infection.

“We believe the findings of our study, at least in part, may explain why Burkholderia infections are limited to older CF patients,” Perault said. “It appears that as at least some strains of Pseudomonas evolve to persist in the CF lung, they also evolve to lose their T6SSs, and hence their competitive edge over Burkholderia, which are then free to colonize the respiratory tract.”

The scientists think the Burkholderia T6SS is an important factor promoting the ability of these pathogens to infect CF patients. Therefore, researchers could potentially develop therapeutics to target these secretion systems to prevent infections.

Along with senior author Peggy Cotter, PhD and first author Andrew Perault, MPH, PhD, other authors are Matthew Wolfgang, PhD, associate professor in the UNC Department of Microbiology and Immunology, Courtney Chandler, PhD, a postdoctoral associate at the Johns Hopkins Bloomberg School of Public Health, and David Rasko, PhD, and Robert Ernst, PhD, both professors at the University of Maryland.

This research was funded through National Institutes of Health Awards NIHR01GM121110 to the Cotter lab and U19AI110820 to the Rasko lab, a Cystic Fibrosis Foundation Award (COTTER18I0), a UNC Graduate School Dissertation Completion Fellowship to Perault, and a University of Maryland Graduate School stipend to Chandler.