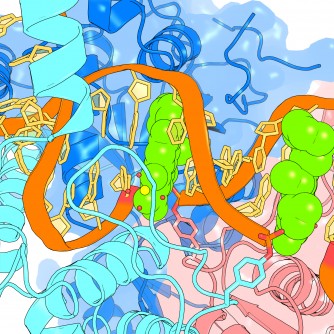 The drug moxifloxacin (green) interacts with internal regions of the gyrase enzyme (blues and pink) and broken DNA (orange and yellow), both from the bacterium that causes tuberculosis.

Newswise — Biophysicists have discovered why the bacteria that cause tuberculosis (TB) are naturally somewhat resistant to antibiotics known as fluoroquinolones. Their findings, based on mapping the detailed three-dimensional structure of the drugs interacting with an essential enzyme in the TB germ, also reveal why some TB drugs are more potent than others and suggest how drug developers can make fluoroquinolones more efficacious against mutations that make the lung disease drug resistant.

Details of the research are reported in two papers to be published the week of Jan. 18 in the Proceedings of the National Academy of Sciences.

“Front-line treatments for TB are eroding rapidly as more cases of multidrug-resistant TB arise worldwide,” says James Berger, Ph.D., professor of biophysics and biophysical chemistry at the Johns Hopkins University School of Medicine. “Our work helps show that we need not — and indeed should not — give up on fluoroquinolones, a longtime weapon in the fight against disease-causing bacteria in general. We’ve helped to identify several promising possibilities for developing new versions of these drugs that might even work against extensively drug-resistant TB.”

Quinolones are a commonly used class of synthetic, broad-spectrum antibiotics that were first developed in the early 1960s. By the 1970s, more potent fluoroquinolone derivatives were made with the simple addition of a fluorine atom to the base molecule. All quinolones, Berger notes, kill bacteria in the same way, by gumming up the works of the enzyme gyrase, which alters the coiling of DNA by breaking its strands and then resealing them. Quinolones prevent resealing so that the bacterial DNA fall apart.

To better understand why some fluoroquinolones work better clinically than others, Berger and his research team used a high-powered imaging technique called X-ray crystallography to generate three-dimensional, atom-by-atom models of how TB’s gyrase interacts with five different versions of the drugs, including a newly synthesized one, 8-methyl-moxifloxacin. Collaborators at Vanderbilt University also used a biochemical test to monitor how various derivatives of the drugs caused bacterial DNA to fall apart.

By viewing the “pocket” within gyrase where the drugs sit, the research team says it saw that the drugs have the potential to interact with the bacterial proteins at two different sites. At one of these sites, the researchers confirmed that a naturally swapped protein building block in TB’s version of gyrase makes fluoroquinolones less effective against TB than against other bacterial infections. Surprisingly, none of the drugs latched on to the second site at all.

According to Berger, this means there is untapped potential to make fluoroquinolone derivatives that bind both sites and in that way increase the drugs’ interactions with gyrase. And, because bacteria, including those that cause TB, might develop a mutation in one region but probably not both, Berger says they would be less likely to become resistant to a drug that strongly bound to both sites.

Most unexpectedly, though, the researchers say, they discovered that the more potent versions of the drugs did not interact strongly with either of the gyrase regions. Instead, their increased effectiveness was due to strong interactions with the broken DNA within the gyrase. When the researchers applied these drugs to the gyrase enzyme in solution and then rinsed it out, the more potent drugs remained stuck within the DNA-gyrase complex, while the weaker ones washed away.

“This result means the fluoroquinolones aren’t working in the most straightforward way, and that’s a challenge for drug developers,” says Berger. “We have to rethink the chemistry of these drugs, but doing so will likely open up new avenues for improvements.”

One such improvement, based on increased interactions with DNA, may already exist in the newly synthesized 8-methyl-moxifloxacin, created by University of Iowa chemist Robert Kerns. When Berger’s team assessed the efficacy of the five fluoroquinolones against two common mutant forms of the TB gyrase, 8-methyl-moxifloxacin did better than the rest in test tube studies, suggesting that it may also perform better than related drugs against other drug-resistant bacteria.

“All together, these studies provide a wealth of information that drug companies can use to continue the development of fluoroquinolones,” says Berger. “They hold a lot of promise for fighting drug resistance in bacteria that cause TB and many other diseases.”

Though TB affects less than 10,000 people in the U.S., it is a leading cause of death worldwide, according to the World Health Organization, affecting 9.6 million people in 2014 and killing 1.5 million of them. Almost 500,000 of these cases are estimated to be multidrug resistant, and fluoroquinolones are under increasing investigation as a means to help counteract these resistant strains.