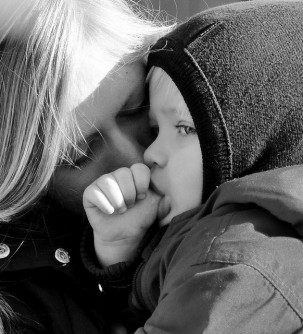 Newswise — In a new study from the University of Montreal, infants remained calm twice as long when listening to a song, which they didn’t even know, as they did when listening to speech. “Many studies have looked at how singing and speech affect infants’ attention, but we wanted to know how they affect a baby’s emotional self-control,” explained Professor Isabelle Peretz, of the university’s Center for Research on Brain, Music and Language. “Emotional self-control is obviously not developed in infants, and we believe singing helps babies and children develop this capacity.” The study, recently published in Infancy, involved thirty healthy infants aged between six and nine months.

Humans are in fact naturally enraptured by music. In adults and older children, this “entrainment” is displayed by behaviours such as foot-tapping, head-nodding, or drumming. “Infants do not synchronize their external behaviour with the music, either because they lack the requisite physical or mental ability,” Peretz explained. “Part of our study was to determine if they have the mental ability. Our finding shows that the babies did get carried away by the music, which suggests they do have the mental capacity to be “entrained”.”

The researchers took a variety of measures to ensure the children’s reaction to the music was not influenced by other factors, such as sensitivity to their mother’s voice. Firstly, both the speech (“baby talk” and adult-directed) and the music presented to infants were produced in Turkish, so that the song and language were unfamiliar. “The performer sang Turkish play songs, not Western ones. This is an important point as studies have shown that the songs we sing to infants have a specific range of tones and rhythms,” explained first author Mariève Corbeil, also of the University of Montreal. “Every parent knows it’s not much use singing Rihanna to their baby!” Secondly, the babies were not exposed to any other stimuli. “Although their parents were in the room, they sat behind the babies, so their facial expressions could not influence the child’s,” Corbeil added. “Infants were also exposed to recordings, rather than a live performance, to ensure comparable performances for all children and no social interactions between performer and child.”

When the infants were calm, parents took a seat behind the infant and the experiment began. The researchers played the recordings until the infants displayed the “cry face” – lowered brows, lip corners pulled to the side, mouth opening and raised cheeks. This is infants’ most common facial expression of distress. “When listening to the Turkish song, babies remained calm for an average duration of approximately nine minutes. For speech, it was roughly only half as long, regardless of whether it was baby-talk or not,” Corbeil said. Baby-talk kept them calm for just over four minutes, on average; for adult-directed speech, it was just under four minutes. “The lack of significant distinction between the two types of speech came as a surprise to us,” she added.The researchers then tested their findings by exposing a different set of infants to recordings of mothers singing songs in a familiar language (French), and found the same effect. “Our findings leave little doubt about the efficacy of singing nursery rhymes for maintaining infants’ composure for extended periods,” Peretz said. “Even in the relatively sterile environment of the testing room–black walls, dim illumination, no toys, and no human visual or tactile stimulation—the sound of a woman singing prolonged infants’ positive or neutral states and inhibited distress.” “While infants listened to the Turkish play song for roughly nine minutes before meeting the cry-face criterion, it was six minutes for the play song in French, a language with which they were very familiar,” Corbeil added. “These findings speak to the intrinsic importance of music, and of nursery rhymes in particular, which appeal to our desire for simplicity, and repetition.”

The findings are important because mothers, and Western mothers in particular, speak much more often than they sing to their children, missing out on the emotion-regulatory properties of singing. The researchers believe that singing could be particularly useful for the parents who are challenged by adverse socio-economic or emotional circumstances. “Although infant distress signals typically prompt parental comforting interventions, they induce frustration and anger in some at-risk parents, leading to insensitive responding and, in the worst cases, to infant neglect or abuse,” Peretz said. “At-risk parents within the purview of social service agencies could be encouraged to play vocal music to infants and, better still, to sing to them.”

About this studyMariève Corbeil, Sandra E. Trehub, and Isabelle Peretz published “Singing Delays the Onset of Infant Distress,” in Infancy on September 22, 2015 (DOI: 10.1111/infa.12114.) Corbeil, Peretz and Trehub are affiliated with the University of Montreal’s International Laboratory for Brain, Music and Sound Research (BRAMS) and Center for Research on Brain, Music and Language (CRBML). Peretz is also a professor at the university’s Department of Psychology and holds the Canada Research Chair in Neurocognition of Music. Trehub is affiliated with the University of Toronto Mississauga’s Department of Psychology. This research was supported by the Social Sciences and Humanities Research Council of Canada, Advanced Interdisciplinary Research in Singing, the Natural Sciences and Engineering Research Council of Canada and the Fonds de recherche du Québec—Nature et Technologies.The University of Montreal is officially known as Université de Montréal.