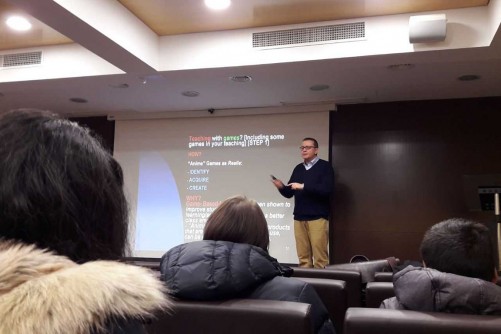 Newswise — ST. LOUIS – In a paper published in Profession, the Modern Language Association's journal about modern languages and literatures, a Saint Louis University professor discusses how he uses video games to teach Italian, allowing his students to master two semesters worth of language acquisition through one intensive class for students new to the Italian language.

Simone Bregni, Ph.D., associate professor of languages, literatures and cultures at SLU, started playing video games in 1975 when he was 12. By the mid-1980s, he was playing textual adventures, and soon realized his English was improving rapidly as he played. This revelation informed his research and teaching, as did his work for a leading Italian video game publication in the 1990s where he wrote a column on the history of video games and served as a correspondent reporting about the video game industry.

Bregni first began incorporating video games in the classroom in language labs in 1997. It was the introduction of a new generation of animated, interactive adventure games in 2009, however, that brought striking results to his students. Set in fully inhabitable environments, they enriched both language and culture.

“Games have now evolved,” Bregni said. “They are interactive movies.”

Though Bregni has used Final Fantasy, Trivial Pursuit, Who Wants to be a Millionaire, Heavy Rain and Rise of the Tomb Raider in his classrooms, one of the most useful games to teach Italian is Assassin’s Creed II.

“In my Italian Renaissance literature course, for example, students explore Florence as it flourished under the Medici by playing Assassin’s Creed II,” Bregni says in the paper. “My 21st-century American students partake in the life of Ezio Auditore, a 20-something man from an affluent family, by wandering around a cultural and historical re-creation of 1476 Florence.”

Bregni uses games to reinforce vocabulary and grammar, introduce cultural data and teach students to problem solve in Italian.  He links specific game chapters to pedagogical goals, preparing students with vocabulary and grammar worksheets, applying them in the relevant game, and discussing and reflecting on them afterwards in a written exercise, a process he calls Identify, Acquire, Create (IAC).

Recently, Bregni received a fellowship grant from SLU’s Reinert Center for Transformative Teaching and Learning to use a state-of-the-art learning studio to develop a language course based entirely on gaming.

In a class called Intensive Italian for Gamers, all students made progress equal to two semesters of Italian over the course of a single fall semester. By the final, students were 3 to 5 points ahead of students in a traditional Italian course.

The class format was a hybrid with a flipped classroom and online instruction. On a typical day, Bregni led 30 minutes of traditional instruction, such as exercises to practice past tenses, for example, followed by 20 minutes of gaming.

“Studies indicate that a strong shared interest within a learning group will foster language acquisition,” Bregni said. “We start with things that students know and can figure out, which is reassuring, and we build from there."

“I firmly believe that learning should be fun,” Bregni said.  “The fact that it is fun doesn’t take away from the seriousness -- it’s just more effective.”

The Reinert Center and the language learning studio of the Department of Languages, Literatures and Cultures now have games that can be played in multiple languages, including Italian, French, Spanish, Russian and Chinese so that instructors and students can supplement their course work.

This semester, Bregni is conducting workshops about gaming and language acquisition at universities in several cities across Europe, including Saint Louis University’s Madrid campus. In 2017 Bregni was awarded the the James H. Korn Scholarship of Teaching and Learning Award by the Reinert Center at Saint Louis University.

Saint Louis University is a Catholic, Jesuit institution that values academic excellence, life-changing research, compassionate health care, and a strong commitment to faith and service. Founded in 1818, the University fosters the intellectual and character development of more than 13,500 students on campuses in St. Louis and Madrid, Spain. Building on a legacy of nearly 200 years, Saint Louis University continues to move forward with an unwavering commitment to a higher purpose, a greater good.