Concept of migration flyways gets an update for small terrestrial birds 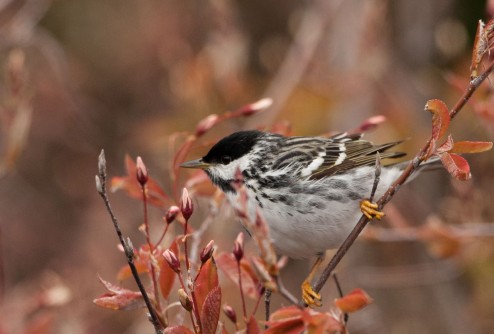 Blackpoll warblers were one of the first species found to fly a different migration route in fall than in spring. The new research shows that many more songbird species migrate in similar elliptical, clockwise routes. 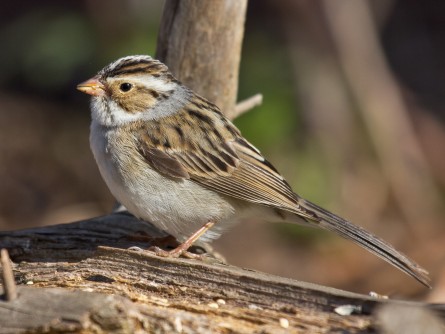 The clay-colored sparrow is a common breeding bird in the Great Plains, and uses the central flyway identified in the study. 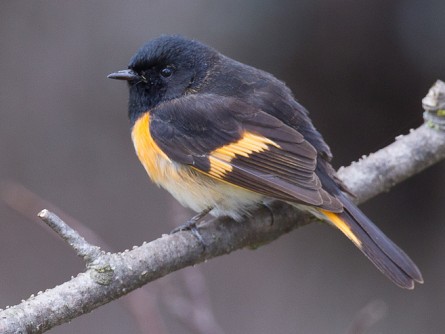 The American redstart breeds across much of North America, and uses the Eastern flyway identified in the study. 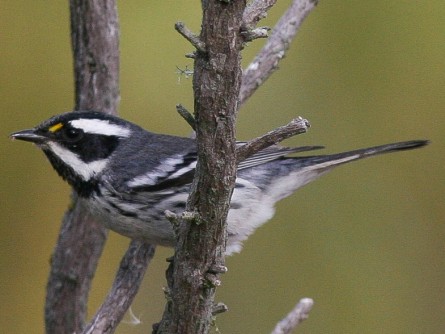 Newswise — ITHACA, N.Y. – In one of the greatest feats of endurance in the biological world, millions of tiny songbirds — many weighing less than an ounce — migrate thousands of miles to Central and South America each year. Now scientists are finding out how these featherweights do it: using elliptical routes that take advantage of prevailing wind patterns to save calories.

“Most of what we’ve known about migration routes comes from ducks and geese,” said Frank La Sorte, a Cornell Lab of Ornithology research associate and lead author of a new paper in Journal of Biogeography. “But terrestrial birds are much smaller and they aren’t reliant on the same kinds of habitats. There really isn’t a narrow migration path for them, and they aren’t necessarily in the same place in spring and fall.”

Scientists for years could do little but assume songbirds followed the same well-defined “flyways” that ducks, geese, and shorebirds use to travel up and down the continent: one flyway along each coast, one up the Mississippi River valley, and one in the center of the continent. Those flyways were delineated by compiling leg-band recoveries and hunter records — techniques that don’t work for small songbirds that migrate at night.

The new work solved this problem with a fresh approach and crowdsourced data submitted to the Cornell Lab’s eBird project between 2004 and 2011. The researchers analyzed thousands of sightings to develop, for each of 93 species, an aggregate picture of where a species is during spring and fall migration. Although they weren't tracking individual birds, collectively the sightings gave them an indication of how the species were migrating. They then used computer models to sort species with similar movement patterns into groups. They also compared migration routes with seasonal patterns of prevailing winds at night.

The study revealed that most land birds fit into three main groups, a western group consisting of 31 species, a central group of 17 species, and 45 species in an eastern group. Examples include the black-throated gray warbler, the clay-colored sparrow, and the American redstart, respectively. The researchers kept the term “flyway” to retain the analogy to waterfowl movements, but they noted these flyways are much more spread out across the continent, and routes in the central and eastern groups overlap considerably.The analysis also revealed that many more land birds than previously realized follow different routes in spring and fall — particularly in the East, where many species cross the Gulf of Mexico in a single overnight flight.

Unlike waterfowl, which migrate north and south along the same relatively narrow routes, rather like semi-trucks on an interstate, songbirds are more like passenger cars touring back roads. They are less tied to a single habitat than waterfowl, so they can fan out across the continent. Many species in the eastern and central groups take southbound routes far to the east of their northbound routes, resulting in a clockwise migration loop that puts some of them out over the Atlantic Ocean on their way to their wintering grounds.By shifting routes, birds are taking advantage of stronger tailwinds in spring and less severe headwinds in fall, the study’s analysis of prevailing winds found. Tailwinds represent a huge advantage for birds heading back to their breeding grounds, La Sorte said, while finding weaker headwinds in fall allows southbound birds to make the best of a bad situation. The pattern has been noted in the past for a few species, such as the blackpoll warbler, but this study gives the first indication of how widespread it is among land birds.

The findings may help refine ideas about how and where to plan for conservation along migratory pathways.

“All these species migrate at night, at high altitudes, where we can’t see them,” La Sorte said. “But when the sun comes up in the morning they have to find somewhere to land. So any new knowledge about where they’re traveling is valuable to conservation planners.”In addition to La Sorte, the paper’s authors include Daniel Fink, Wesley Hochachka, Andrew Farnsworth, Amanda Rodewald, Kenneth Rosenberg, Brian Sullivan, David Winkler, Chris Wood, and Steve Kelling, all of the Cornell Lab. The research was supported by grants from the Leon Levy Foundation, the Wolf Creek Foundation, and the National Science Foundation.

MEDIA NOTE: The following images are available for reporters to use with their stories:Blackpoll warbler:Caption: Blackpoll warblers were one of the first species found to fly a different migration route in fall than in spring. The new research shows that many more songbird species migrate in similar elliptical, clockwise routes. Photo by Brian Sullivan. Download image at: http://www.allaboutbirds.org/bbimages/CLO/images/News_releases/blackpoll_warbler_sullivan.jpg

Clay-colored sparrow:Caption: The clay-colored sparrow is a common breeding bird in the Great Plains, and uses the central flyway identified in the study. Photo by Laura Erickson. Download image at:http://www.allaboutbirds.org/bbimages/CLO/images/News_releases/clay-colored_sparrow_erickson.jpg

American redstart:Caption: The American redstart breeds across much of North America, and uses the Eastern flyway identified in the study. Photo by Brian Sullivan. Download image at:http://www.allaboutbirds.org/bbimages/CLO/images/News_releases/american_redstart_sullivan.jpg 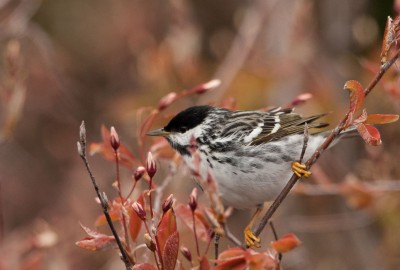 Caption: Blackpoll warblers were one of the first species found to fly a different migration route in fall than in spring. The new research shows that many more songbird species migrate in similar elliptical, clockwise routes. 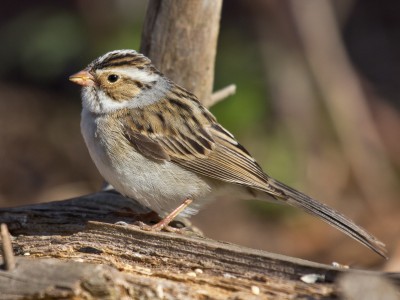 Caption: The clay-colored sparrow is a common breeding bird in the Great Plains, and uses the central flyway identified in the study. 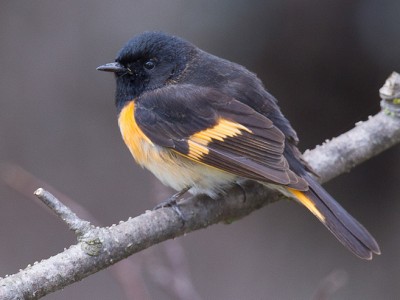 Caption: The American redstart breeds across much of North America, and uses the Eastern flyway identified in the study. 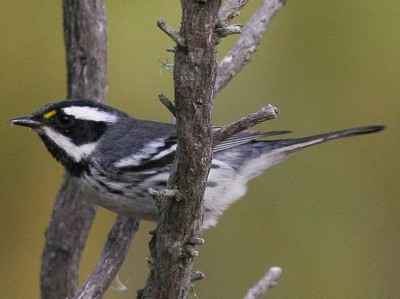