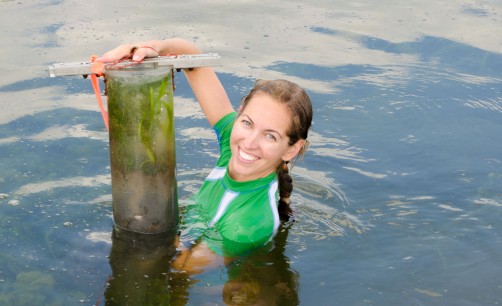 Newswise — Assistant Professor of Environmental Studies Cassie Gurbisz was among 14 co-authors of a new research article published this week in the Proceedings of the National Academy of Sciences.

The article reports the positive impact of long-term nutrient reductions on an important and valuable ecosystem in the Chesapeake Bay. Scientists indicate the resurgence of underwater grasses supports nutrient reductions from EPA’s Total Maximum Daily Load (TMDL). This, along with conservation incentives, has resulted in a healthier Chesapeake Bay.

Jonathan Lefcheck, PhD, formerly of the Virginia Institute of Marine Science and now at the Bigelow Laboratory for Ocean Science, along with Gurbisz and 12 co-authors, shows that a 23 percent reduction of average nitrogen levels in the Bay and an eight percent reduction of average phosphorus levels have resulted in a four-fold increase in abundance of Submerged Aquatic Vegetation (SAV) in the Chesapeake Bay.  This ecosystem recovery is an unprecedented event; based on the breadth of data available and a sophisticated data analysis, this is the biggest resurgence of underwater grasses ever recorded in the world.

The researchers employed advanced analytical tools to definitively show how the reduction of excess pollutants like nitrogen and phosphorus are the cause of this ecosystem recovery. To link land use and Chesapeake Bay status, researchers analyzed data in two different ways: one focusing on the cascade of nutrients from the land to the waterways, and one showing what happens to SAV once the nutrients are in the water.

Gurbisz said she participated in a series of workshops with scientists who study various aspects of SAV ecology. She said she helped develop the conceptual basis of the project and was excited that the work generated relevant results related to restoring the Chesapeake Bay.

St. Mary’s College of Maryland is accredited by the Middle States Commission on Higher Education through 2024-2025. St. Mary’s College, designated the Maryland state honors college in 1992, is ranked one of the best public liberal arts schools in the nation by U.S. News & World Report. Approximately 1,600 students attend the college, nestled on the St. Mary’s River in Southern Maryland.