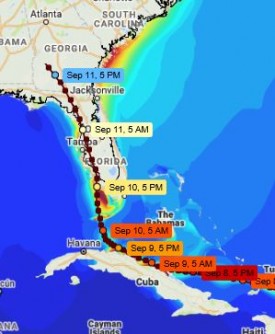 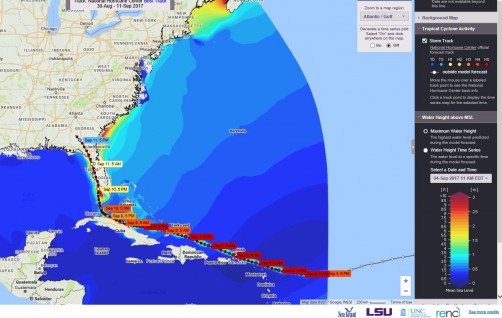 Back in June, as Tropical Storm Cindy was nearing the Texas and Louisiana coastlines, the Texas State Operations Center, the Texas Department of Transportation (TXDOT)—which operates the ferries along the Texas Gulf Coast—were using a combination of online tools and observations to closely monitor water heights since the ferry – a key aspect of their evacuation plan – can’t operate if the water rises more than four and a half feet. Unfortunately, based on their observations, it looked like they were going to have to close the ferry down.

That meant Texas National Guard wouldn't be able to take the 20-minute ferry to provide voluntary evacuation assistance to the Bolivar Peninsula, if called upon. Rather, they would have to drive two hours around the peninsula to reposition themselves.

At the time, a tool funded by the Department of Homeland Security Science and Technology Directorate (S&T) was forecasting water levels associated with the storm along the Texas coast. The tool, ADCIRC (Advanced Circulation), models storm surge and coastal flooding,

Dr. Gordon Wells, at The University of Texas-Austin, Center for Space Research, a key partner of the Texas State Operations Center, was monitoring ADCIRC results via the Coastal Emergency Risks Assessment website, which is partially-funded by the Coastal Resilience Center (CRC), a DHS S&T Center of Excellence. Based on the ADCIRC forecasts, Wells concluded that the water height wouldn’t exceed four feet and as a result the TXDOT decided not to close the ferry, ensuring the availability of a crucial transportation link for residents and emergency workers.

NOAA tide gages in the area later showed the ADCIRC predictions came within 0.2 to 0.3 feet of the actual recorded measurements, confirming the generally high accuracy of ADCIRC results.

Used by a variety of federal, state, regional and local organizations, including National Weather Service offices, the U.S. Army Corps of Engineers, Federal Emergency Management Agency and the U.S. Coast Guard, ADCIRC has evolved since 2008 as a highly valuable forecasting tool for pre-storm operations.

The system was used during Hurricanes Irene, Isaac, Sandy, Matthew and most recently, Hurricanes Harvey and Irma.

“The model was key to my decision regarding aircraft protection in Puerto Rico, and our decision to relocate our command center out of Miami. I'll be watching it with every update,” said U.S. Coast Guard (USCG) Rear Admiral Peter Brown, Commander of District 7, which includes most of Florida, Georgia and South Carolina. He used ADCIRC results to plan for evacuation of USCG staff during Hurricane Irma.

Dr. Rick Luettich, who leads CRC, said DHS S&T OUP funding has led to improvements in ADCIRC, increased connectivity to emergency operators and the development of platforms such as the Coastal Emergency Risks Assessment website that make model results accessible to end users.  The website is free and anyone can use it.

“We now have an established ADCIRC university research and supercomputing network that activates ahead of every storm to provide information for planning and operations,” said Luettich. “We strive to get the best possible information out to the people who need it when they need it – and that means having researchers who are working side-by-side with emergency managers ahead of a storm.”

The network includes research centers in Texas, Louisiana, Indiana, North Carolina and Florida, all of whom work closely with their respective state emergency management departments.

“The Coastal Resilience Center and its ADCIRC team have become a key resource for our operational partners such as the U.S. Coast Guard, who have to make tough calls as hurricanes approach the United States,” said Dr. Matthew Clark, S&T Office of University Programs director.