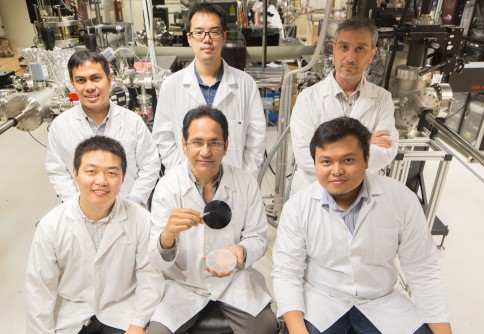 Newswise — Researchers from the National University of Singapore (NUS) recently uncovered novel properties of strontium niobate, which is a unique semiconductor material that displays both metallic type conduction and photocatalytic activity. The two studies, which were conducted in collaboration with researchers from the University of California, Berkeley, and the Lawrence Berkeley National Laboratory, herald exciting opportunities for the creation of novel devices with unprecedented functionalities as well as unique applications of a new family of photocatalytic materials.

Dr Wan Dongyang, a researcher from the NUS Nanoscience and Nanotechnology Institute (NUSNNI) who was involved in both research, said, “The key to these successful studies was the ability of the NUSNNI team to produce high-quality crystalline films of these materials that were then studied by a variety of measurements to provide scientific clues on how such materials perform under varying conditions.”

In the first study, the researchers, who were led by Assistant Professor Andrivo Rusydi, and Director of NUSNNI Professor T Venky Venkatesan, had found that while strontium niobate is highly metallic in nature due to a very large population of electrons in the material, which is typical of most metals, it is still transparent at most photon energies, which is an exceptional property that is unlike most metals. Utilising spectroscopic techniques, the research team discovered that this unique property arose from an intrinsic plasmonic absorption.

Dr Teguh Citra Asmara, the first author of the paper and also a postdoctoral researcher at NUSNNI, said, “From our studies, we found that this material is a semiconductor with a large bandgap of four electron volts. Based on our understanding of semiconductors and this material’s strong metallic behaviour, we did not expect this material to absorb any visible photons, so the results we found are indeed surprising.”

“Plasmons are resonant oscillations of a collection of electrons and typically occur in a metallic solid. Under the right conditions, photons can cause these plasmons to be excited in a solid and in this process the solid absorbs the photon energy. Before our team figured this out, this material was thought to consist of a smaller bandgap, of the order of two electron volts, and a secondary band above of comparable energy,” explained Prof Venkatesan.

Asst Prof Rusydi said, “This novel discovery opens new research directions and paths for plasmonics research, and enables us to look into previously untapped insulating and strongly-correlated materials. We are also currently studying the possible applications of this new type of plasmons.”

This project was originally initiated by Dr Zhao Yongliang as a part of his PhD thesis, and Dr Wan Dongyang followed up on it as part of his doctoral thesis. Both of them carried out the project under the supervision of Prof Venkatesan. The novel findings were reported in prestigious scientific journal Nature Communications on 12 May 2017.

In the second study, NUS researchers examined how strontium niobate catalyses water. The team, supervised by Prof Venkatesan, found that when strontium niobate is in contact with water under solar irradiation, the semiconductor material could spilt water into its constituents of oxygen and hydrogen. This study, which was also conducted in collaboration with researchers from the Nanyang Technological University, was first published online in the prestigious scientific journal Nature Communications on 19 April 2017.

Prof Venkatesan explained, “While this material converts water into hydrogen under solar irradiation, the mechanism behind this process was previously misinterpreted as being due to the high speed or mobility of the electrons in the material. Our group clearly showed that it was not the case. The measured electron mobility was significantly low, but the effect was enhanced by the resonant absorption of the solar photons by the intrinsic plasmons present in this material.”

The results strongly suggest a novel approach to designing catalysts for various applications, and the work could lead to new techniques of harvesting hydrogen – a sustainable fuel - from water, hence contribute towards reducing carbon footprint.

“At NUSNNI, we have a group that has found a family of materials, aside from strontium niobate, that work equally well as plasmonic water splitters. Moving forward, we are working towards finding the right combination of photo-catalytic process for producing useful chemicals,” added Prof Venkatesan.