baby-leatherback-crawl from Newswise on Vimeo. 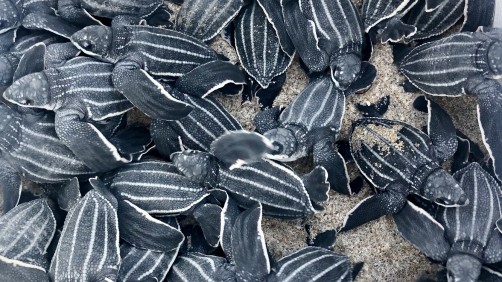 Baby leatherback sea turtles on a nesting beach in Florida. 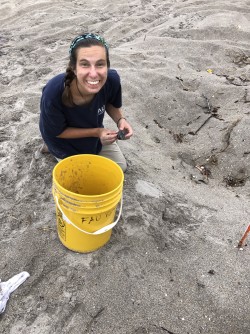 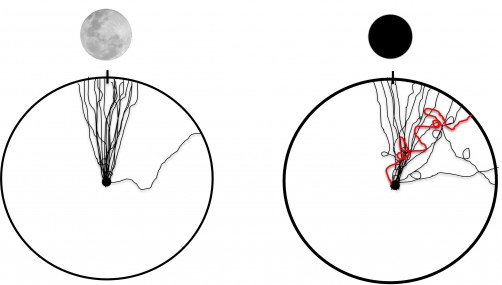 Newswise — When sea turtle hatchlings emerge from their nests, typically at night, they crawl toward the ocean in what is known as “seafinding.” They have to discriminate between the brighter seaward versus a dimmer landward horizon and then move toward the source of the light. That difference in radiance between opposing horizons enables them to find the ocean even when the uneven surface of the beach precludes a direct view of the sea, at least for a small hatchling.

For most marine turtles, this journey is pretty straightforward. However, leatherback (Dermochelys coriacea) hatchlings more often crawl around in circles trying to find the ocean. Circling delays their entry into the ocean, wastes energy and importantly, places them at greater danger from natural predators like birds, crabs and raccoons.

To better understand why this circling behavior happens and why it is most commonly observed in leatherbacks, researchers from Florida Atlantic University first determined how sensitive the leatherbacks were to light. They discovered that compared to their hard-shelled relative, the loggerhead, leatherbacks were 10 to 100 times less sensitive to light wavelengths than loggerheads.

Leatherback eyes also failed to show any obvious structural adaptations that might promote improved visual function under dim lighting conditions, such as a proportionally larger cornea or lens to increase light-gathering potential. That finding led them to the hypothesis that circling might be related to how much light was present at the beach when hatchlings crawled from the nest to the sea. In turn, that led them to compare how well the two species oriented under different moon phases: bright light during full moon and only starlight under new moon.

Results of the study, published in the journal Animal Behaviour, revealed that the frequency of circling was positively associated with low levels of lunar illumination (during new moon), but only in leatherbacks. In loggerheads, circling frequencies remained low regardless of lunar phase. But, why this happens surprised the researchers because leatherbacks, both as juveniles and as adults, forage during the day and at night whereas green turtles and loggerheads are primarily day-active foragers.

“Leatherback eyes are less sensitive to all wavelengths of light than loggerheads, and during a dark night, they experience difficulty in determining the location of the seaward horizon,” said Samantha Trail, first author and a Ph.D. student in the Department of Biological Sciences within the Charles E. Schmidt College of Science. “Even so, leatherback hatchlings eventually crawl to the sea, even during new moon. It just takes them longer because they stop occasionally to circle, which we think enables them to re-evaluate, and eventually confirm, the correct crawl direction.”

These results raised an obvious question: why should leatherbacks be less sensitive to light than loggerheads, especially since circling imposes a cost: it lengthens the time hatchlings remain on the beach and increases exposure to terrestrial predators.

Trail and her thesis advisor Michael Salmon, Ph.D., second author and a research professor in FAU’s Department of Biological Sciences, hypothesize that those costs persist because other differences in leatherback visual capabilities enhance their ability to detect prey, mates or favorable habitats in the open ocean, where these turtles live. That habitat presents these animals with a visual environment that is very different from the one occupied by loggerheads, a species that for the most part resides in shallow, coastal waters.

The leatherback is the only sea turtle without a hard shell. They have been on the Endangered Species list since 1970. According to the National Ocean Service, few sea turtles survive to adulthood and estimates  range from 1 in 1,000 to 1 in 10,000.

This project was supported by FAU’s Department of Biological Sciences and the National Save the Sea Turtle Foundation. The research design was peer-reviewed and authorized by the state of Florida (FWC Permit no. MTP-19-173A).