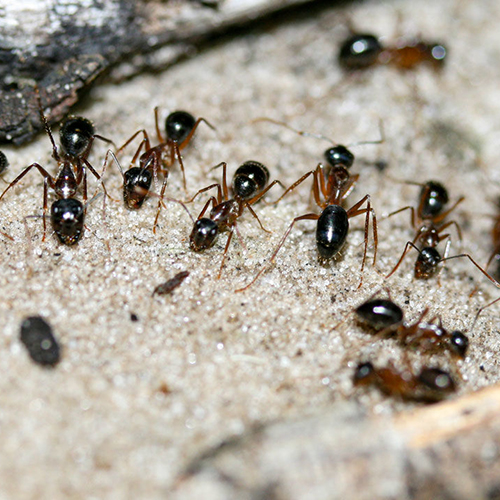 Newswise — An unlikely penchant for pee is putting a common sugar ant on the map, as new research from the University of South Australia shows their taste for urine could play a role in reducing greenhouse gases.

Led by wildlife ecologist Associate Professor Topa Petit, the Kangaroo Island-based research found that sugar ants prefer urine over sugar – the food source after which they’re named – nocturnally foraging on it to extract nitrogen molecules, some of which could end up in the greenhouse gas, nitrous oxide.

While other ants are known to be attracted to urine, this is the first time that ants have been observed mining dry urine from sand, and for a long period of time.

“When I first noticed the ants swarming to scavenge urine, it was purely by accident. But under research conditions we found that the ants determinedly mined urea patches night after night with greater numbers of ants drawn to higher urea concentrations,” Assoc Prof Petit says.

“Camponotus terebrans are undoubtedly looking for urea in urine because, similar to certain other ant species, a bacterium in their digestive tract allows them to process urea to get nitrogen for protein.

“This remarkable ability to extract urea from dry sand not only shows how sugar ants can survive in arid conditions, but also, how they might reduce the release of ammonia from urine, which leads to the production of nitrous oxide, a highly active greenhouse gas.”

Nitrous oxide (NO2) is a greenhouse gas 300 times more potent than carbon dioxide. And while less abundant than carbon dioxide emissions, its presence in the atmosphere has increased substantially over the past decade, accelerated mostly by the widespread use of fertilisers.

Assoc Prof Petit says that while there is still a lot to learn about the foraging behaviours of sugar ants, the study shows a symbiotic relationship between ants and vertebrates such as kangaroos in dry environments, and evidence of the nitrogen cycle at work.

“The ability of sugar ants to thrive in dry, sandy environments and use sources of nitrogen that may not be available to other species is impressive. It may give them a competitive advantage by allowing them to feed more offspring and therefore increase their numbers,” Assoc Prof Petit says.

“Researchers working on ants as bio-indicators on grazed and ungrazed lands should take ants’ ability to process urea into account, because large amounts of urine will probably affect the assortment of ant species in the area. It would also be interesting to investigate how much ants may modify the urine ammonia volatilises from paddocks.

“This is not the last we will hear about these sugar ants – they could open up a whole new field of research.”