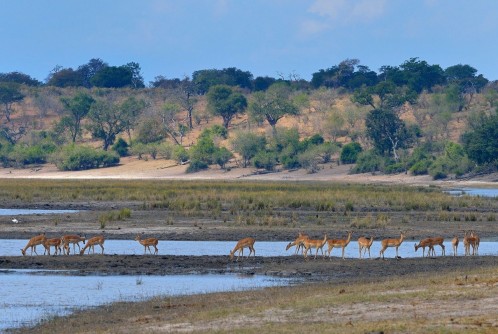 The Chobe River flood plain system, like others in Africa, experiences annual floods that are highly variable, both seasonally and from year to year.

Newswise — Diarrheal disease, a preventable and treatable illness, remains the second-leading cause of death in children under the age of 5 and a persistent public health threat in sub-Saharan Africa. Researchers have now uncovered how surface water dynamics may increase the vulnerability of dependent populations to diarrheal disease and climate change.

Kathleen Alexander, professor of wildlife in Virginia Tech’s College of Natural Resources and Environment, in collaboration with Alexandra Heaney and Jeffrey Shaman, both of Columbia University’s Mailman School of Public Health, has been conducting research on the influence of flood pulse dynamics on diarrheal disease along the Chobe River flood plain system in northern Botswana.

The results of their study, funded by the National Science Foundation, were published in PLOS Medicine.

Alexander’s research is focused on communities reliant on surface water in the Chobe River flood plain system. This river system, like others in Africa, experiences annual floods that are highly variable, both seasonally and from year to year.

Alexander and her team wanted to know if surface water dynamics were contributing to diarrheal disease outbreaks and how climate change, predicted to increase flooding and hydrological variability, might increase the vulnerability of local human populations to diarrheal disease.

Despite the presence of centralized water treatment infrastructure, outbreaks of diarrheal disease continue to occur in a quasi-regular pattern in the region.

“It was a fundamental question for me,” Alexander said. “These places are doing everything right, but local populations are still impacted by diarrheal disease. Why does the infrastructure fail to protect these communities, and what can we do to improve public health now and under future environmental conditions?”

In partnership with the government of Botswana, the researchers evaluated outbreak patterns across eight villages and towns along the Chobe River, utilizing decades of data from 10 government health facilities. They evaluated these data in conjunction with detailed hydrometeorological conditions, including bimonthly water quality studies that spanned nearly a decade.

They discovered that increases in diarrheal disease cases were closely tied to periods of rainfall, flood recession, and changes in surface water quality, with a 1 meter drop in river height in the dry season associated with a staggering 16.7 percent increase in diarrheal disease in children under 5.

A significant finding was that various age groups were affected differently by season, with children aged 1 to 4 experiencing more illnesses in the wet season with rainfall events, whereas older children and adults reported more diarrhea in the dry season during periods of flood recession. Diarrhea type also varied significantly by season.

“What this tells us is that environmental conditions drive diarrheal disease — not just the number of diarrhea cases and timing of outbreaks but also who is affected and what type of diarrhea might occur,” said Alexander, who is also affiliated with Virginia Tech’s Fralin Life Science Institute.

Adults and children were equally affected, suggesting that in high HIV burden populations such as those in northern Botswana, an expansion of diarrheal disease surveillance and intervention strategies may be needed to engage other at-risk sectors of the population beyond the under-5 age class.

While flooding of a region is often associated with disease outbreaks in other systems, it was the draining of water from the flood plains that was most closely tied to diarrheal disease and degraded water quality in this study.

“This research shows the complex relationships among people, wildlife, and the water cycle in regions with pronounced wet and dry seasons,” said Richard Yuretich, a director of the National Science Foundation’s Dynamics of Coupled Natural and Human Systems program, which funded the research. “The pattern of disease associated with changes in the volume and quality of water can help in designing water-treatment systems that are responsive to the natural ebb and flow of the environment.”

The researchers hypothesize that extreme variability in surface water conditions associated with annual rainfall and flood dynamics may compromise water treatment facilities that require removal of sediments and solids to be effective.

In southern Africa, climate change is predicted to intensify hydrological variability and the frequency of extreme events such as drought and floods, suggesting that dependent populations will be more vulnerable to waterborne disease.

“There is an urgent need to evaluate water infrastructure and ensure these systems are able to handle rapid shifts in surface water quality,” Alexander said.

Alexander emphasized that the complex dynamics influencing diarrheal disease underscore the need for inclusion of research dimensions not usually considered in the field of public health.

“A single scale of study is often inadequate to understanding today’s complex problems,” she noted. “Public health research must look beyond the patient, engaging multiscale and multidisciplinary approaches that span the human-environmental interface.”

Alexander, a wildlife veterinarian, disease ecologist, and co-founder of the Center for Conservation of African Resources: Animals, Communities, and Land Use (CARACAL) in Botswana, directs her research program at exploring and understanding the factors that influence the emergence and persistence of novel and re-emerging diseases at the human-wildlife-environment interface.

Funding for this study was provided by the National Science Foundation’s Dynamics of Coupled Natural and Human Systems program, with additional support contributed through the Empowerment of Non State Actors Programme, a joint partnership between the government of Botswana and the European Union. This paper is part of the PLOS Medicine Special Issue: Climate Change and Health.