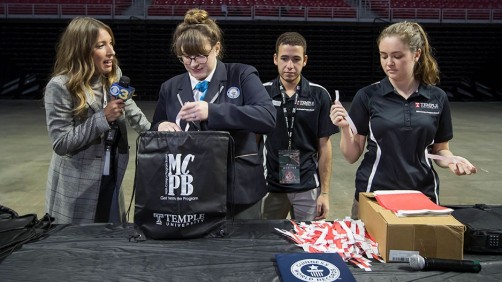 This year’s Guinness World Records title, for most backpacks stuffed with school supplies in one hour, was earned in a mere 37 minutes. That’s all it took for hundreds of Owls to stuff 6,026 backpacks with crayons, pencils, rulers and other school supplies, more than doubling the previous record. Brown University held the previous Guinness World Records title of 3,000 backpacks stuffed in an hour.

The packed bags were donated to local schools and organizations to be used by children in the city.

“My favorite thing about every time Temple University takes on a Guinness World Records title is that it’s always focused on giving back to the community,” said Christina Conlon, an adjudicator for Guinness World Records who has judged Temple’s three title attempts. “They have made peanut butter and jelly sandwiches for people who are hungry, they have collected socks for people who are cold, and now they’re stuffing backpacks for children so that they can further their education.”

Earning a new Guinness World Records title became a Homecoming tradition two years ago, when Main Campus Program Board first spearheaded the effort. In 2016, Temple earned the title for most sandwiches made in one hour, putting together a record 49,100 peanut butter and jelly sandwiches to be donated to local food banks. Last year, Temple earned the title for largest sock drive in one hour at a single location, collecting 2,798 pairs of socks to donate.

“I love that Temple’s attempts are always outwardly focused on giving back to the community they’re present in,” Conlon said. “It’s not focused on themselves. It’s really about doing good for others around them.”