Researcher Examines Aerosols And Their Impact On Clouds, Weather 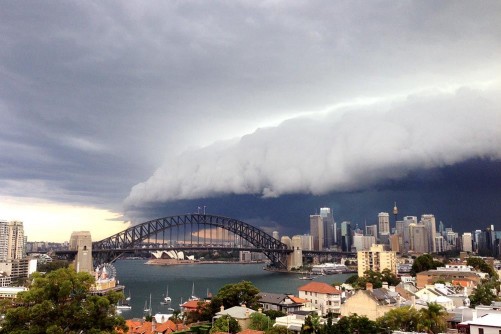 A large storm cloud covers the Sydney CBD on March 5, 2014 in Sydney, Australia

Newswise — Different kinds of aerosols released into the atmosphere can affect cloud formations and influence weather patterns, according to a team of researchers that includes a Texas A&M University atmospheric scientist.

Tim Logan, instructional assistant professor in atmospheric sciences at Texas A&M, and colleagues from the University of Arizona have had their findings published in a special issue of Advances of Atmospheric Sciences.

The team found that not all aerosols act alike and different types produce variances in cloud formation, strength and duration.

“Aerosols indirectly affect cloud development. Since they serve as the basis of cloud droplet formation, they can influence cloud droplet size and number, cloud brightness, cloud lifetime, and precipitation, among numerous other cloud processes. All these things in turn can affect the weather,” Logan says.

There any different types of aerosols that have positive and negative effects on cloud development. Sulfates, certain types of carbonaceous compounds, such as aged wildfire smoke and diesel particles, and even biological aerosols tend to increase the number of cloud droplets. Mineral dust and fresh wildfire smoke tend to decrease cloud droplet number concentrations.

“However, the amount of moisture in the air [humidity] and the affinity of the aerosols for water vapor must also be considered,” he said. “Basically, the easier it is for the aerosols to become ‘wetted,’ the easier [it is] for them to activate as cloud condensation nuclei and grow to cloud droplet size.”

Many studies have been done showing that air pollution tends to influence weather patterns.  In recent years, China, which produces huge amounts of air pollution from factories and industrial plants, has been pinpointed as a main source of aerosol influences in cloud formation.  According to the World Health Organization, of the world’s 20 most polluted cities, 16 of them are located in China. Polluted clouds tend to affect global weather patterns, studies show.

Logan says the aerosol type is a big key in understanding under which conditions clouds will develop as well as how much precipitation will come from them.

The United States can also be affected, he notes.

“Aerosols and their interactions with clouds can affect weather over the United States by aerosols that are transported from other areas on a seasonal basis he explains. “For example, dust from Asia and wildfire smoke from Central America are regularly observed during the spring months, while wildfire smoke from Canada is typically observed during the late summer season. The smoke has been known to influence severe weather and there are several studies which investigate this phenomenom.

“Areas in Asia and Africa are showing marked increases in aerosol generation as they continue to rapidly develop economically and socially,” Logan adds. “They are generally going through similar growing pains as the west did since the Renaissance period.”

Logan says the team found that certain aerosols and air mass types are dominant during certain times of the year, and they show a seasonal pattern.

“This pattern can be used to determine the magnitude of the aerosol affect,” he believes, “as well as the formation of precipitation over land and ocean with respect to climate change.”

The project was funded by the National Science Foundation.