The Ceremonial Sounds that Accompanied Our Ancestors’ Funerals, 15,000 Years Ago 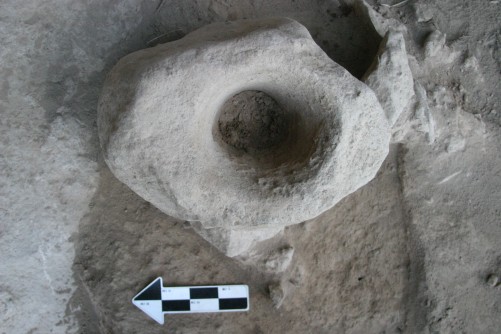 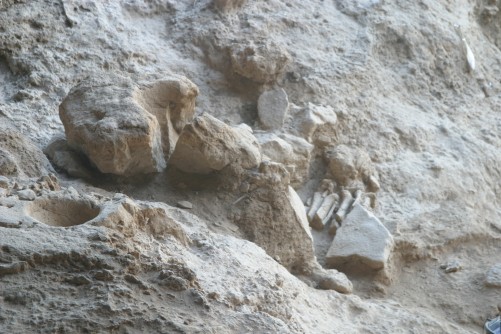 A boulder mortar at the Natufian burial site in Rakefet Cave, Mt. Carmel. 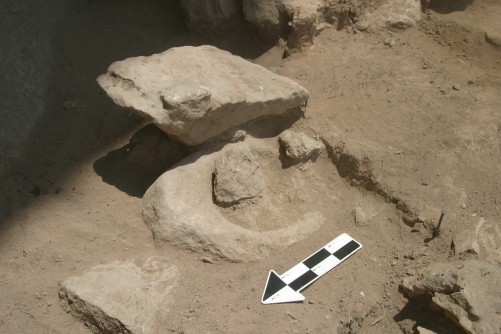 A boulder mortar found at the Natufian burial site

Newswise — They decorated graves with flowers, held ceremonial meals before their funerals, and – as a new study from the University of Haifa now shows – the Natufians who lived in our region 15,000 – 11,500 years ago also created massive mortars that were used to pound food at their burial ceremonies. The pounding sound of these large mortars informed the members of the community that a ceremony was underway. “The members of the Natufian culture lived during a period of change, and their communal burial and commemorative ceremonies played an important role in enhancing the sense of affiliation and cohesion among the members of the community,” explain Dr. Danny Rosenberg and Prof. Dani Nadel, from the Zinman Institute of archaeology, University of Haifa, who undertook the study.

The Natufians were among the first humans to abandon the nomadic lifestyle and settle in permanent communities, including the construction of buildings with stone foundations. It is even possible that they engaged in initial forms of cultivation. They were also among the first human cultures that established cemeteries – defined areas in wish burial took place over generations, in contrast to the random burial seen in more ancient cultures. As research has progressed, scholars have gradually come to appreciate the importance the Natufians attached to burial in the social and ceremonial context. They were the first to pad their graves with flowers and leaves, and researchers from the University of Haifa have recently found evidence of large banquets held by the Natufians during funerals and commemorative ceremonies.

Over the years, numerous tools have been found at Natufian residential and burial sites, but relatively little attention has been paid to one of the most remarkable types of tools: large boulder mortars. Dr. Rosenberg and Prof. Nadel were fascinated by these boulders, some of which are almost a meter high and weight 100 kilograms. “These are the largest stone artifacts that were hewn during this period in the Middle East, and indeed they are much larger than most of the stone objects that were hewn here in much later periods,” Dr. Rosenberg explains. “These boulders have been found at Natufian sites in Syria, Jordan, Lebanon, and Israel, so that they clearly had a regional significance.” Despite this, no one undertook an overall examination of the phenomenon of the boulders. “We were intrigued by the common features shown by these unusual tools, such as the raw material from which they were made, their dimensions, the hewing techniques involved, and their usage. Above all, though, we were fascinated by the settings in which the boulders were found and their association to burial ceremonies,” the researchers noted.

The two researchers investigated most of the boulders of this type that have been found in the Middle East. They discovered that almost all the boulders were found in burial sites or in contexts relating to burial. Some of the objects were found buried in the ground, with only their upper edge visible. “The size and weight of the boulders shows that they were not intended to be mobile. The fact that some of them were buried suggests that they were supposed to remain in place as part of the ‘furniture’ of the burial site, or in the burial context itself. This point emphasizes that they were not created for everyday eating purposes, but formed an integral part of the ceremonies and occurrences in the areas in which the Natufians buried their dead.”

The researchers argue that the giant boulders can be seen as part of a broader Natufian phenomenon connecting different areas through a single system of ceremonies and beliefs. Against the background of what is already known about Natufian burial customs, they concluded that the boulders also played a central role in these ceremonies, seeking to reinforce collective cohesion and identity. The food ground by the boulders played a social or ceremonial role, similar to familiar contemporary functions. The pounding on or in the boulders could be heard at a great distance, and may have served to announce the holding or the beginning of the burial ceremony, thereby informing the members of adjacent communities that an important ceremony was taking place – much like church bells. 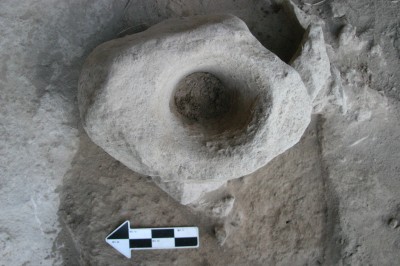 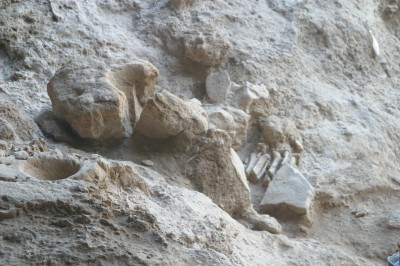 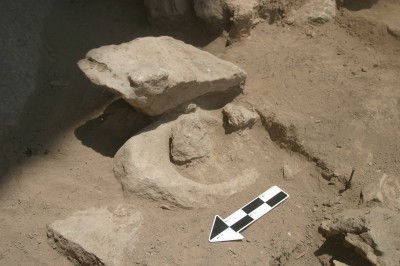 Caption: A boulder mortar found at the Natufian burial site