The Young Sperm, Poised for Greatness

19-May-2014 12:00 AM EDT, by Huntsman Cancer Institute at the University of Utah Edit Institution
favorite_border 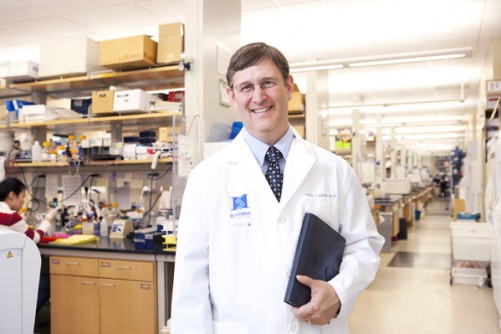 Newswise — SALT LAKE CITY— In the body, a skin cell will always be skin, and a heart cell will always be heart. But in the first hours of life, cells in the nascent embryo become totipotent: they have the incredible flexibility to mature into skin, heart, gut, or any type of cell.

It was long assumed that the joining of egg and sperm launched a dramatic change in how and which genes were expressed. Instead, new research shows that totipotency is a step-wise process, manifesting as early as in precursors to sperm, called adult germline stem cells (AGSCs), which reside in the testes.

The study was co-led by Bradley Cairns, Ph.D., University of Utah professor of oncological sciences, and Huntsman Cancer Institute investigator, and Ernesto Guccione, Ph.D., of the Agency for Science Technology and Research in Singapore. They worked closely with first author and Huntsman Cancer Institute postdoctoral fellow, Saher Sue Hammond, Ph.D. The research was published online in the journal Cell Stem Cell.

Typically, sperm precursors live a mundane life. They divide, making more cells like themselves, until they receive the signal instructing them to mature into sperm.

There is evidence, however, that these cells have the potential to do more. Under the unusual conditions that promote the cells to form dense cancerous masses called testicular teratomas, the young sperm transform into precursors of skin, muscle, and gut.

The answer, they found, is that the sperm precursors are somewhere in between. The most telling evidence is the status of a quartet of genes: Lefty, Sox2, Nanog, and Prdm14. When activated, the genes can trigger a cascade of events that give cells stem cell properties. In cells limited to becoming one cell type, the genes are silent.

Yet in sperm precursors, the genes bear a code of chemical tags, called methylation groups, indicating that the four genes are silenced, but poised to become active. In other words, embedded within these cells, is the potential to become totipotent.

Cairns compares the tags on the poised genes to bookmarks. “Sperm cells and their precursors put ‘bookmarks’ at all the important genes they need to access quickly.” Once fertilization occurs, he explains, cells have to become fully totipotent in a short amount of time. “Then, when the sperm and egg come together, all you have to do is complete the job that you had already started.”

The engineering principal, as he calls it, ensures the transition occurs rapidly and accurately.

The result is just one of many that together comprise a detailed playbook documenting genetic and epigenetic changes that take place along the journey to becoming totipotent. The rich resource will guide future studies toward a deeper understanding of totipotency, cancer, and fertilization.

Huntsman Cancer Institute (HCI) is one of the world’s top academic research and cancer treatment centers. HCI manages the Utah Population Database - the largest genetic database in the world, with more than 16 million records linked to genealogies, health records, and vital statistics. Using this data, HCI researchers have identified cancer-causing genes, including the genes responsible for melanoma, colon and breast cancer, and paraganglioma. HCI is a member of the National Comprehensive Cancer Network (a 25-member alliance of the world's leading cancer centers) and is a National Cancer Institute-Designated Cancer Center. HCI treats patients with all forms of cancer and operates several high-risk clinics that focus on melanoma and breast, colon, and pancreas cancers. The HCI Cancer Learning Center for patient and public education contains one of the nation's largest collections of cancer-related publications. The institute is named after Jon M. Huntsman, Sr., a Utah philanthropist, industrialist, and cancer survivor.