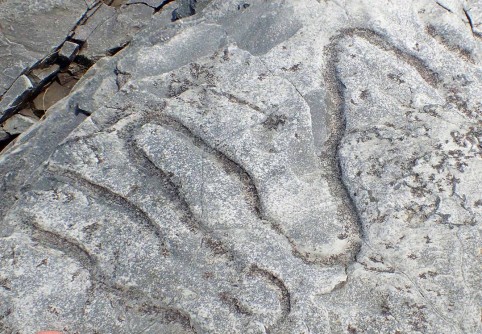 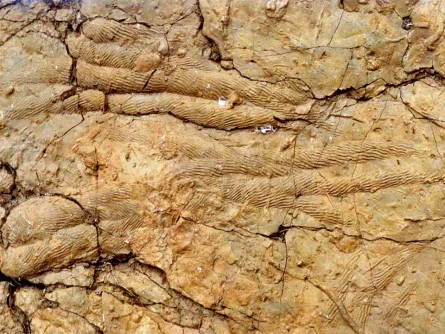 A fossilized meandering grazing trail from the Cambrian era

Newswise — If you could dive down to the ocean floor nearly 540 million years ago just past the point where waves begin to break, you would find an explosion of life--scores of worm-like animals and other sea creatures tunneling complex holes and structures in the mud and sand--where before the environment had been mostly barren.

Thanks to research published today in Science Advances by a University of Saskatchewan (USask)-led international research team, this rapid increase in biodiversity--one of two such major events across a 100-million-year timespan 560 to 443 million years ago--is part of a clearer picture emerging of Earth's ancient oceans and life in them.

"We can see from the trace fossils--tracks, trails, borings, and burrows animals left behind--that this particular environment of the ocean floor, the offshore, served as a 'crucible' for life," said USask paleobiologist Luis Buatois, lead author of the article. "Over the next millions of years, life expanded from this area outwards into deeper waters and inwards into shallower waters."

The research is the culmination of over 20 years of work from Buatois and the team which examined hundreds of rock formations in locations across every continent.

"Until now, these two events--the Cambrian Explosion and the Great Ordovician Biodiversification Event--have been understood mostly through the study of body fossils--the shells, carapaces and the bones of ancient sea creatures," said Buatois. "Now we can confidently say that these events are also reflected in the trace fossil record which reveals the work of those soft-bodied creatures whose fleshy tissues rot very quickly and so are only very rarely preserved."

For the first time, the team has shown evidence of animals actively "engineering" their ecosystem--through the construction of abundant and diverse burrows on the sea floor of the world's oceans in this ancient time.

"Never underestimate what animals are capable of doing," said USask paleobiologist Gabriela Mángano, co-author of the paper. "They can modify their physical and chemical environment, excluding other animals or allowing them to flourish by creating new resources. And they were definitely doing all these things in these ancient seas."

The trace fossil-producing animals' engineering efforts may have laid the foundation for greater diversity in marine life. The researchers identified a 20-million-year time lag during the Cambrian Explosion (the time when most of the major groups of animals first appear in the fossil record) between diversification in trace fossils and in animal body fossils, suggesting the later animals exploited changes which enabled them to diversify even more.

The research also helps resolve a big question from the geochemical record, which indicated much of the ancient ocean was depleted of oxygen and unsuitable for life. Like oceans today, the Cambrian ocean had certain areas that were full of life, while others lacked the necessary conditions to support it.

"The fact that trace fossil distribution shows that there were spots where life flourished adjacent to others devoid of animal activity all through the early Cambrian period is a strong argument in favor of the idea that zones with enough oxygen to sustain a diversity of animals co-existed with oxygen-depleted waters in deeper areas," said Mángano. "It's a situation similar to what happens in modern oceans with oxygen minimum zones in the outer part of the continental shelf and the upper part of the continental slope, but oxygenated ones in shallower water."

The research could provide new insights from an evolutionary perspective into the importance of extensive rock formations of a similar vintage found in Canada and elsewhere, and help society to prepare for coming challenges.

"Understanding changes that took place early in the history of our planet may help us to face present challenges in modern oceans, particularly with respect to oxygen changes," said Buatois.

The research was funded by grants from Canada's Natural Sciences and Engineering Research Council awarded to Buatois and Mángano.