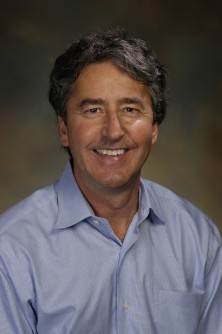 Gerald F. Joyce is a professor at The Scripps Research Institute.

Newswise — LA JOLLA, CA—August 15, 2015—Scientists at The Scripps Research Institute (TSRI) have taken a big step toward the laboratory re-creation of the “RNA world,” which is generally believed to have preceded modern life forms based on DNA and proteins.

“This is probably the first time some of these complex RNA molecules have been synthesized with a ribozyme [a special RNA enzyme] since the end of the RNA world four billion years ago,” said TSRI Professor Gerald F. Joyce, the senior author of the study.

The results from the study, reported this week in the online Early Edition of the Proceedings of the National Academy of Sciences, show the scientists have succeeded in creating a ribozyme that can basically serve both to amplify genetic information and to generate functional molecules.

The new ribozyme can replicate short lengths of RNA efficiently and perform transcription on even longer RNAs to make functional RNA molecules with complex structures—coming close to what scientists imagine in terms of an RNA replicator that could have supported life before modern biology, where protein enzymes now handle gene replication and transcription.

Taking Up a Decades-Old Challenge

In the new study, Joyce and TSRI Research Associate David P. Horning set out to use test-tube evolution techniques to tackle the decades-old challenge of creating an enzyme that could both replicate and transcribe RNA and thus support an RNA world.

The team started with an enzyme that had been developed and improved upon by other researchers since the early 1990s. The class I RNA polymerase ribozyme, as it has come to be known, can perform the basic task of RNA synthesis—required for transcribing an RNA template into a functional RNA molecule—by binding to a strand of RNA and using it as a template to stitch together a complementary RNA strand.

But prior forms of the ribozyme had been very limited in the RNA sequences they could handle, and couldn’t transcribe RNAs that have even moderately complex structures. Because of those limitations, they also could not perform full replication of RNA, which requires the transcription of a complementary strand back into a copy of the original.

Horning and Joyce drew upon several improvements described in previous research and then added random mutations to create a population of roughly 100 trillion distinct variants of the molecule. Mimicking the evolutionary process of natural selection, they set up a system to isolate only the variant ribozymes that could synthesize—from the respective RNA templates—two different and challenging RNA molecules, which have mixed sequences and complex structures, and have functions in the sense that they bind tightly to specific target molecules.

“The selection was based on the ability of these newly synthesized RNAs to actually function by binding to their targets,” said Horning. “To be able to make these functional RNAs, the ribozyme effectively had to evolve to become versatile in terms of the sequence and the structure of the RNA it could handle.”

The best performer after two dozen rounds of selection, polymerase ribozyme 24-3, proved capable of synthesizing not only the two target-binding RNAs but also several other structurally complex RNA molecules that exist in nature—as functional remnants of the ancient RNA world—including a yeast version of a “transfer RNA” molecule that has an essential protein-making role in all cells.

“We found that the new ribozyme can handle most sequences and all but the most difficult structures, so we can use it to make a variety of functional RNA molecules,” Joyce said.

Even when synthesizing the limited RNA sequences that the original class I RNA polymerase ribozyme could handle, ribozyme 24-3 proved capable of stitching them together about 100 times faster than its ancestor could.

Turning to the much harder task of replication, the TSRI researchers found that ribozyme 24-3 could copy RNAs of up to two dozen nucleotides, achieving what biologists call “exponential replication” and creating as many as 40,000 copies of a target RNA within 24 hours.

The 24-3 ribozyme is thus the first ever to combine the two basic capabilities—RNA synthesis and RNA replication—necessary for a pre-protein, pre-DNA world of RNA life.

To generate and sustain a true “RNA world,” the new ribozyme will have to be improved further to enable the replication of longer, more complex RNA molecules—crucially including the polymerase ribozyme itself. The Joyce laboratory is now driving its ribozyme toward that goal with further test-tube evolution experiments.

“A polymerase ribozyme that achieves exponential amplification of itself will meet the criteria for being alive,” Joyce said. “That’s a summit that’s now within sight.”

Funding for the study, “Amplification of RNA by an RNA polymerase ribozyme,” was provided by the National Aeronautics and Space Administration (NNX14AK15G) and the Simons Foundation (287624).