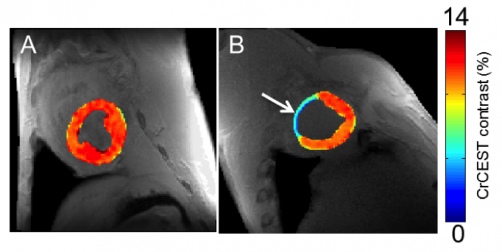 On the left, creatine CEST maps of healthy myocardium in a large animal, and on the right, eight week-old infarcted tissue, with noticeably less creatine. Arrow on right indicates infarcted region of heart tissue.

Newswise — PHILADELPHIA— A new MRI method to map creatine at higher resolutions in the heart may help clinicians and scientists find abnormalities and disorders earlier than traditional diagnostic methods, researchers at the Perelman School of Medicine at the University of Pennsylvania suggest in a new study published online today in Nature Medicine. The preclinical findings show an advantage over less sensitive tests and point to a safer and more cost-effective approach than those with radioactive or contrasting agents.

Creatine is a naturally occurring metabolite that helps supply energy to all cells through creatine kinase reaction, including those involved in contraction of the heart. When heart tissue becomes damaged from a loss of blood supply, even in the very early stages, creatine levels drop. Researchers exploited this process in a large animal model with a method known as CEST, or chemical exchange saturation transfer, which measures specific molecules in the body, to track the creatine on a regional basis.

The team, led by Ravinder Reddy, PhD, professor of Radiology and director of the Center for Magnetic Resonance and Optical Imaging at Penn Medicine, found that imaging creatine through CEST MRI provides higher resolution compared to standard magnetic resonance spectroscopy (MRS), a commonly used technique for measuring creatine. However, its poor resolution makes it difficult to determine exactly which areas of the heart have been compromised.

“Measuring creatine with CEST is a promising technique that has the potential to improve clinical decision making while treating patients with heart disorders and even other diseases, as well as spotting problems sooner,” said Reddy. “Beyond the sensitivity benefits and its advantage over MRS, CEST doesn’t require radioactive or contrast agents used in MRI, which can have adverse effects on patients, particularly those with kidney disease, and add to costs.”

Today, magnetic resonance imaging (MRI)-based stress tests are also used to identify dead heart tissue—which is the warning sign of future problems (coronary artery disease, for instance)—but its reach is limited. MRI is often coupled with contrast agents to help light up problem areas, but it is often not sensitive enough to find ischemic (but not yet infarcted) regions with deranged metabolism, said Reddy.

“After a heart attack, different regions of the heart are damaged at different rates. This new technique will allow us to very precisely study regional changes that occur in the heart after heart attacks, enabling us to identify and treat patients at risk for developing heart failure before symptoms develop,” said study co-author Robert C. Gorman, MD, professor of Surgery, and director of Cardiac Surgical Research at Penn Medicine.

To demonstrate CEST’s ability to detect heart disease, the researchers applied the creatine CEST method in an MRI scanner, in healthy and infarcted myocardium (muscle tissue in heart) in large animals. In the process, the nuclear magnetization of amine (NH2) creatine protons is saturated by a radiofrequency pulse from the MRI. After the exchange with water, the degree of saturation is observed as the water signal drops, and thus the concentration of creatine becomes apparent. (In the body, creatine is converted to creatinine, which can be measured through blood and urine tests and is an important tool for assessing renal function.)

The team showed that the creatine CEST method can map changes in creatine levels, and pinpoint infarcted areas in heart muscle tissue, just as MRS methods can. However, they found, CEST has two orders of magnitude higher sensitivity than MRS. That advantage could help spot smaller damaged areas in the heart missed by traditional methods, the authors say.

In addition, the team used CEST to map increases in creatine over time by imaging human subjects as they flexed their calves while inside an MRI scanner to demonstrate the technology’s ability to correctly track the molecule.

The method can also be used to investigate alterations in normal heart function that are also seen in many other types of non-ischemic heart disease, such as abnormal cardiac hypertrophy—as well as disorders in the brain, said Reddy.

“Though at much lower levels than in the heart, creatine levels change in the brain when abnormalities arise,” said Reddy. “Given the heightened resolution of this technique, this presents an opportunity for studying brain disorders with deranged creatine metabolism without the use of contrast agents as well.”

"The ability to visualize heart muscle viability at high-resolution without radiation exposure or the injection of a contrast agent is a significant advancement. It could allow doctors to detect small areas of damaged heart tissue early in the course of a disease, when treatments are most likely to be effective," said Christina Liu, PhD, who oversees funding for molecular imaging research by the National Institute of Biomedical Imaging and Bioengineering (NIBIB), part of the National Institutes of Health.

###Penn Medicine is one of the world's leading academic medical centers, dedicated to the related missions of medical education, biomedical research, and excellence in patient care. Penn Medicine consists of the Raymond and Ruth Perelman School of Medicine at the University of Pennsylvania (founded in 1765 as the nation's first medical school) and the University of Pennsylvania Health System, which together form a $4.3 billion enterprise.The Perelman School of Medicine has been ranked among the top five medical schools in the United States for the past 16 years, according to U.S. News & World Report's survey of research-oriented medical schools. The School is consistently among the nation's top recipients of funding from the National Institutes of Health, with $398 million awarded in the 2012 fiscal year.The University of Pennsylvania Health System's patient care facilities include: The Hospital of the University of Pennsylvania -- recognized as one of the nation's top "Honor Roll" hospitals by U.S. News & World Report; Penn Presbyterian Medical Center; Chester County Hospital; Penn Wissahickon Hospice; and Pennsylvania Hospital -- the nation's first hospital, founded in 1751. Additional affiliated inpatient care facilities and services throughout the Philadelphia region include Chestnut Hill Hospital and Good Shepherd Penn Partners, a partnership between Good Shepherd Rehabilitation Network and Penn Medicine.Penn Medicine is committed to improving lives and health through a variety of community-based programs and activities. In fiscal year 2012, Penn Medicine provided $827 million to benefit our community.