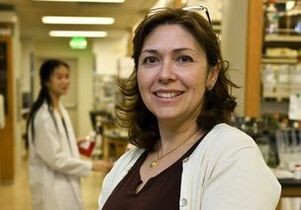 Newswise — UCLA researchers, in collaboration with the University of Iowa, discovered the contribution of a specific gene in the proper development of blood cells that give rise to hematopoietic stem cells. The scientists also found that disruption of this gene resulted in various blood cancers and anemia in animal models. The findings identify a potential target for the development of treatments for some types of leukemia, anemia and other blood disorders.

BACKGROUND
Many of the gene mutations associated with hematologic malignancies (cancers that affect the blood and lymph system) are known to scientists. Frequently, the normal version of these genes are essential for making blood cells grow and mature, but researchers still lack a complete picture of disease-causing mutations. The study team used a genetic approach to investigate the earliest possible steps that occur in blood cells as they first bud from specific sites in the embryo called hemogenic endothelium. The scientists sought to identify key regulatory genes in blood development that if mutated could result in hematologic anomalies.

METHOD
Using a genetic approach, the investigators traced back the mutations and found them in many of the previously known disease-causing genes, and also identified novel ones, like Pi4Ka, that resulted in disease. Working with several animal models and cell cultures, they learned that Pi4ka was associated with correct hematopoietic development. The gene was important for the maturation of certain blood cell types and when mutated, cells stopped maturing and further expanded leading to anemia and other blood anomalies.

IMPACT
The research demonstrated the contribution of Pi4Ka in normal hematopoiesis, particularly during the differentiation of red blood cells. It also showed that mutations in this gene at a hemogenic stage could result in erythroid and/or myeloid malignancies. The scientists further linked specific mutations of the Pi4ka gene in the emergence of cancer. The study identifies a new potential target for cancer and anemia therapies.

JOURNAL
The research is published online in Cell Reports.

FUNDING
The research was supported by the National Institutes of Health and the UNCF/Merck Graduate Science Research Dissertation Fellowship.