Ultrasound Could Save Racehorses from Bucked Shins

Speed of ultrasound waves in leg bones identifies the ailment, common in young horses during training 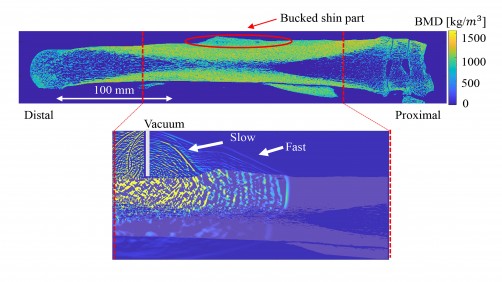 Newswise — WASHINGTON, August 9, 2022 – When racehorses enter training at about 2 years old, they can develop tiny stress fractures and new bone formations in their legs. This condition, called bucked shin, occurs in about 70% of the animals, leading to pain and delays in training schedules.

Although X-ray radiography can diagnose bucked shin, computed tomography scans and MRIs are necessary to evaluate the severity in detail. These strategies are difficult to use on large animals, especially in the field. Horses require anesthesia and must be lying down.

Axial transmission, in which an ultrasound emitter and receiver are placed on the skin to induce and measure wave velocities, is frequently used to study osteoporosis in humans. The method could detect bucked shin more easily and preserve the health and growth of young horses.

"If we can identify this disease at early stages, we can stop training for a period of several weeks or have the horses do light training while they recover," said author Mami Matsukawa, from Doshisha University in Kyoto, Japan.

To achieve this task, Matsukawa and her team created multiple 3D digital models of a racehorse metacarpal bone with varying degrees of bucked shin. Each was based on computed tomography measurements of a real bone with bucked shin.

The researchers simulated ultrasonic wave propagation along the bone model, finding two main wave components with different velocities, one faster and one slower. In the area with bucked shin, the fast waves changed speed dramatically because of irregularities in the bone, while the slow waves were almost unaffected.

The simulations showed that the larger the area of bucked shin, the more variation in the fast waves. Because the axial transmission technique is already established for humans, translating it to work for horses should not be too difficult a task. In comparison to other methods, such ultrasound devices would be small, compact, easy to carry, and inexpensive.

While this study used only the velocity as a diagnostic, the team aims to use other wave characteristics, like the modes and attenuation, to obtain material properties of bone in the future.

The article "Study on ultrasonic wave propagation in equine leg bone for screening bucked shin" is authored by Kazuki Miyashita, Hidehisa Suzuyama, Ko Chiba, Makoto Osaki, Hiroshi Mita, Norihisa Tamura, and Mami Matsukawa. The article will appear in The Journal of the Acoustical Society of America on Aug. 9, 2022 (DOI: 10.1121/10.0012689). After that date, it can be accessed at https://asa.scitation.org/doi/full/10.1121/10.0012689.

The Journal of the Acoustical Society of America (JASA) is published on behalf of the Acoustical Society of America. Since 1929, the journal has been the leading source of theoretical and experimental research results in the broad interdisciplinary subject of sound.  JASA serves physical scientists, life scientists, engineers, psychologists, physiologists, architects, musicians, and speech communication specialists. See https://asa.scitation.org/journal/jas

Journal Link: The Journal of the Acoustical Society of America

The Journal of the Acoustical Society of America