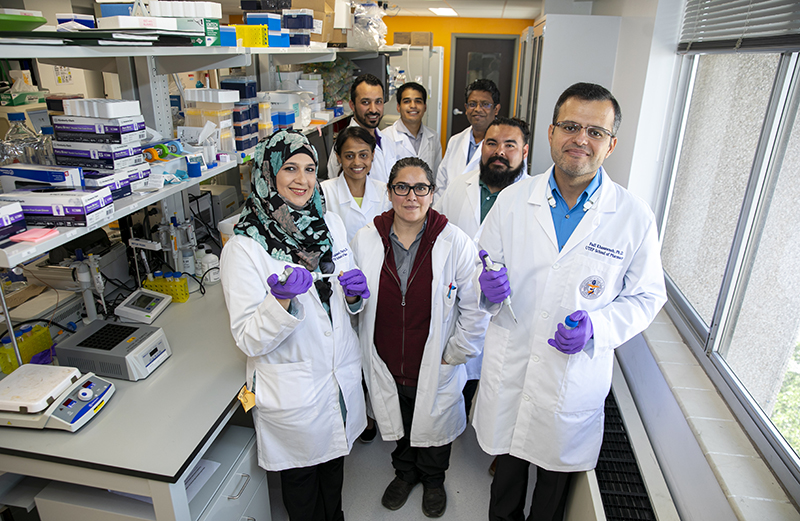 Newswise — Researchers at The University of Texas at El Paso’s School of Pharmacy have been awarded $1.8 million from the National Heart, Lung and Blood Institute (NHLBI) of the National Institutes of Health (NIH) to study the effects of thirdhand smoke on platelet function and cardiovascular disease such as heart attack and stroke. This is the first NIH research project grant (R01) that the School of Pharmacy has received since it opened in 2017.

Fadi Khasawneh, Ph.D., associate professor and chair of pharmaceutical sciences, will lead the five-year study with co-investigator Fatima Z. Alshbool, Pharm.D., Ph.D., assistant professor of pharmacology. They will collaborate with Manuela Martins-Green, Ph.D., professor of cell biology at the University of California, Riverside.

The project will look for biomarkers of cardiovascular disease in the blood of individuals who have been exposed to thirdhand smoke, the residue from tobacco smoke that stays on clothing and indoor surfaces and can lead to serious health problems. Researchers will also examine the chemicals in thirdhand smoke to determine which substances become more toxic over time and directly affect cardiovascular health.

Khasawneh and Alshbool are both platelet biologists. Of particular interest is how thirdhand smoke can cause platelets, or tiny blood cells, to form blood clots in or around the heart that lead to heart attack or stroke.

“We want to do research that is translational, that is relevant, and that can have a direct impact on human health and helping people,” said Alshbool, whose research interests also include the health effects of e-cigarette vapor.

Thirdhand smoke is particularly harmful for children who inhale or ingest the residue as they crawl on carpets or play on furniture.

“We also hope to educate the public about their behavior,” Alshbool said. “Smokers may believe they are not putting their children at risk if they don’t smoke in front of them. But in fact, if you smoke on this chair and your son or daughter sits on it, they get exposed to thirdhand smoke.”

Although thirdhand smoke is a relatively new phenomenon in public health, Khasawneh and Alshbool have been studying its effects on health for the past six years. In 2018, they received a grant from the National Institute of Environmental Health Sciences to examine the effects of thirdhand smoke on the cardiovascular health of children who are exposed during pregnancy.

In 2015, Alshbool and Khasawneh were among the first group of researchers to demonstrate that thirdhand smoke could cause blood clots.

“The health effects of thirdhand smoking are not fully understood and we are glad that members of the UTEP School of Pharmacy are pursuing finding some answers,” said José O. Rivera, Pharm.D., founding dean of the School of Pharmacy. “This research can have major implications in public health policies. Obtaining an R01 is a major milestone for our school.”