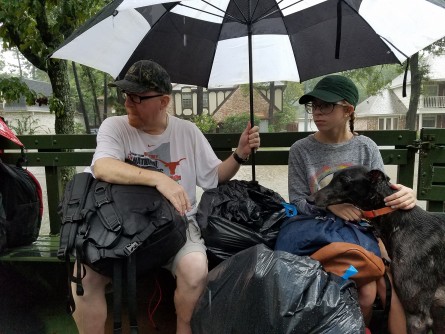 Members of a Northwest Harris County family sit in a high-water rescue truck after evacuating by boat from their home during Hurricane Harvey. 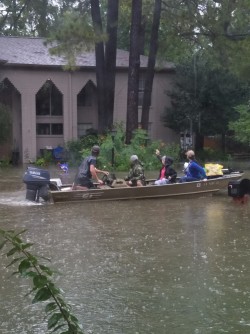 From inside a Northwest Harris County home, a resident takes a photo of a neighbor waving to fellow neighbors as she is evacuated during rain bands from Hurricane Harvey. 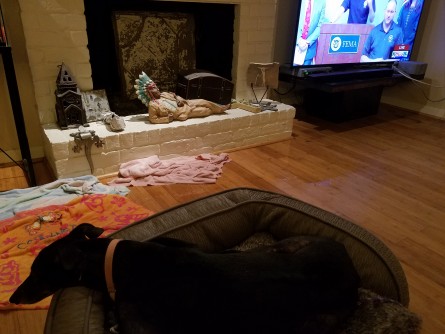 Newswise — HOUSTON – (Sept. 8, 2017) – It’s 2 a.m. on Aug. 28, 2017 and although you’ve only been in bed two hours, you get up to make the rounds of the house checking for water. For days, Hurricane Harvey has wreaked havoc on Texas, swallowing entire chunks of Houston in deluging bands of rain, and your home could be next. Your street already resembles a lake – not exactly the water-front property you wanted.

Hours earlier, the first signs that this home purchased 44 years ago by the family – and never flooded – might not remain dry this time had gurgled up through the sunken garden tub. At the sight, your stomach dropped and fear shot through your system. You tried to take a normal breath. Your body and mind began to go through something as old as the human race itself – fight or flight response.

“A traumatic event activates the fear center in the brain,” said Madhavi K. Reddy, Ph.D., assistant professor in the Department of Psychiatry at McGovern Medical School at The University of Texas Health Science Center at Houston (UTHealth). “The amygdala begins firing rapidly and if it’s in overdrive, it’s harder for us to use executive functioning skills to reason and react.”

The amygdala is the integrative center for emotions, emotional behavior and motivation, according to Neuroscience Online, an open-access electronic textbook for the neurosciences provided by the Department for Neurobiology and Anatomy at McGovern Medical School.

The amygdala produces the autonomic – automatic physical – components of emotion such as changes in heart rate, blood pressure and respiration via pathways to the lateral hypothalamus and brain stem. The link between several parts of the brain – the prefrontal cortex, septal area, hypothalamus and amygdala – is the likely cause of the “gut feeling” we get, as well as subjective feelings about what is good and what is bad.

You might say it’s a no-brainer that water coming inside the house is bad when the brain is actually doing all that work to let you come to that conclusion.

When faced with a traumatic event, some people experience an instant “freeze” that comes naturally to animals and humans before you launch into action as the amygdala begins the chain of reactions that will result in the release of cortisol and adrenaline.

All you know is that you’re in the process of emptying bathroom cabinets and the hall closet of every towel, blanket and sheet in an attempt to hold the water back as it begins spreading from closets into the bathroom into the master bedroom.

The body will continue to go through this process of chemical release as you debate when to throw in the towel, so to speak, culminating with a visit from a Precinct IV constable deputy who says Cypress Creek is going up another foot and you need to leave now. Cortisol and adrenaline get you through the process of getting three dogs, two cats, teenage twin daughters, you and your spouse into a boat, then a high-water rescue truck, then to a temporary sanctuary.

Now you are high and dry, mostly, and you have stresses of a different sort, depending on finances and flood insurance and whether you can go home or need to depend on the grace of friends or FEMA. You may forget your Social Security number or the name of someone you’ve known for years. One priest said he suddenly blanked and couldn’t remember words to The Lord’s Prayer, which he had said thousands and thousands of times.

“During the immediate stressful event and in the aftermath, you are going to have disruptions in emotional reactions as your brain tries to reason through what occurred,” said Reddy, who is director of the Clinical and Translational Research Program on Traumatic Stress at UTHealth and the UT Physicians Stress, Trauma and Recovery Services Clinic. “It also matters how long the secondary stresses go on as you deal with basic needs – food, shelter and clothing. These secondary stressors can make the impact linger and that takes up space in your brain, which slows things down.”

Even as people are able to return to homes and work, the brain will still be working overtime behind the scenes.

“The learning experience of what happened begins in the brain. You live in a world where something happened that had never happened before and you have to make sense of it in some way,” Reddy said. “You will adjust your world view or you will adjust the world to fit your view.”

You might have nightmares or be easily irritated or short-tempered. You might be forgetful, drop a thought in the middle of a sentence, take longer to absorb information. You might be numb.

“It’s important that people give themselves space to have reactions, to let their emotions out. It’s OK to feel sadness or anger,” Reddy said. “Pushing it down and bottling it up are not adapative in the long run. Self-care is really important, as is acknowledging that you went through something really scary.”

Even if you weathered the storm with your home untouched, you still went through a significant event and people “shouldn’t get out measuring sticks, literally, to compare themselves with others,” she said. “Survivor’s guilt is a real thing.”

If you are still experiencing problems in functioning or if the problems are affecting relationships with other people for more than a month, Reddy recommends seeking professional help.

Avoid using alcohol or drugs to cope, she said. Instead, do things that you enjoy – watching movies, taking walks.

“Humans are resilient and will withstand what we’ve endured,” she said. “It’s important to not over-pathologize what is going on. You need to give yourself time.”

So that old saying, “time heals,” really means something?