12-Dec-2017 10:05 AM EST, by University of Texas Health Science Center at Houston
favorite_border 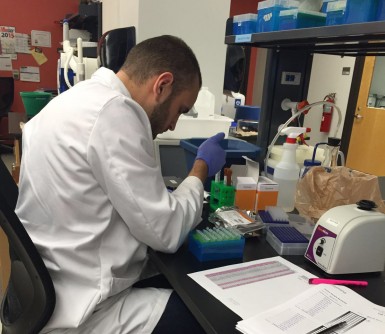 Gabriel Fries, Ph.D., works in his lab at UTHealth Houston

Newswise — HOUSTON – (Dec. 12, 2017) – Bipolar disorder may involve accelerated epigenetic aging, which could explain why persons with the disorder are more likely to have – and die from – age-related diseases, according to researchers from The University of Texas Health Science Center at Houston (UTHealth).

The findings were published in today’s issue of Translational Psychiatry, a Nature Publishing Group journal.

While chronological age is measured in the amount of time that a person has been alive, epigenetic age measures molecular markers of chemical modifications to DNA.

“Bipolar disorder has been previously associated with accelerated aging but the mechanisms are largely unknown,” said Gabriel R. Fries, Ph.D., first author and post-doctoral research fellow in the Department of Psychiatry and Behavioral Sciences at McGovern Medical School at UTHealth. “We aimed to understand from our study the biology of what’s driving the accelerated aging. What we found is that patients with bipolar disorder showed an accelerated epigenetic aging compared to healthy controls.”

The chemical modifications could be precipitated by the disorder itself or by poor lifestyle habits in diet, exercise, tobacco use and illegal substance use.

“Controlling these factors is just as important as taking medications,” Fries said.

Senior author of the study was Joao L. de Quevedo, M.D., Ph.D., professor and director of the Translational Psychiatry Program in the Department of Psychiatry and Behavioral Sciences at McGovern Medical School.

“We believe a difference wasn’t detected in younger patients because they haven’t had as much exposure to stressful events,” Fries said. “This gave us a hint that cumulative chronic exposure to stress would relate to accelerated aging. We would see it more in older people who have experienced a lifetime of stress in dealing with the disease.”

Along with the epigenetic clock, the study included two other biologic clocks: telomere length and mitochondrial DNA copy numbers.

“The epigenetic acceleration correlated with the number of copies of mitochondrial DNA, suggesting that the cross-talk between the nucleus and the mitochondria might be underlying the premature aging in bipolar disorder,” Fries said.