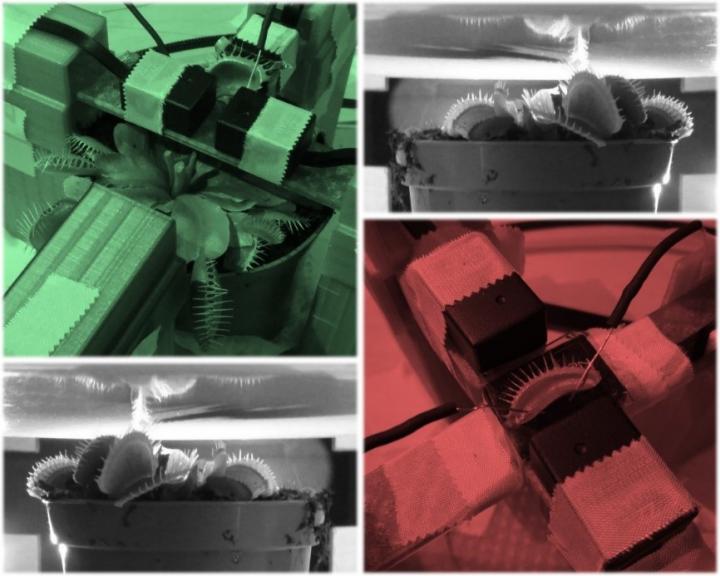 Newswise — The Venus flytrap (Dionaea muscipula) is a carnivorous plant that encloses its prey using modified leaves as a trap. During this process, electrical signals known as action potentials trigger the closure of the leaf lobes. An interdisciplinary team of scientists has now shown that these electrical signals generate measurable magnetic fields. Using atomic magnetometers, it proved possible to record this biomagnetism. "You could say the investigation is a little like performing an MRI scan in humans," said physicist Anne Fabricant. "The problem is that the magnetic signals in plants are very weak, which explains why it was extremely difficult to measure them with the help of older technologies."

Electrical activity in the Venus flytrap is associated with magnetic signals

We know that in the human brain voltage changes in certain regions result from concerted electrical activity that travels through nerve cells in the form of action potentials. Techniques such as electroencephalography (EEG), magnetoencephalography (MEG), and magnetic resonance imaging (MRI) can be used to record these activities and noninvasively diagnose disorders. When plants are stimulated, they also generate electrical signals, which can travel through a cellular network analogous to the human and animal nervous system.

An interdisciplinary team of researchers from Johannes Gutenberg University Mainz (JGU), the Helmholtz Institute Mainz (HIM), the Biocenter of Julius-Maximilians-Universität of Würzburg (JMU), and the Physikalisch-Technische Bundesanstalt (PTB) in Berlin, Germany's national meteorology institute, has now demonstrated that electrical activity in the Venus flytrap is also associated with magnetic signals. "We have been able to demonstrate that action potentials in a multicellular plant system produce measurable magnetic fields, something that had never been confirmed before," said Anne Fabricant, a doctoral candidate in Professor Dmitry Budker's research group at JGU and HIM.

The trap of Dionaea muscipula consists of bilobed trapping leaves with sensitive hairs, which, when touched, trigger an action potential that travels through the whole trap. After two successive stimuli, the trap closes and any potential insect prey is locked inside and subsequently digested. Interestingly, the trap is electrically excitable in a variety of ways: in addition to mechanical influences such as touch or injury, osmotic energy, for example salt-water loads, and thermal energy in the form of heat or cold can also trigger action potentials. For their study, the research team used heat stimulation to induce action potentials, thereby eliminating potentially disturbing factors such as mechanical background noise in their magnetic measurements.

While biomagnetism has been relatively well-researched in humans and animals, so far very little equivalent research has been done in the plant kingdom, using only superconducting-quantum-interference-device (SQUID) magnetometers, bulky instruments which must be cooled to cryogenic temperatures. For the current experiment, the research team used atomic magnetometers to measure the magnetic signals of the Venus flytrap. The sensor is a glass cell filled with a vapor of alkali atoms, which react to small changes in the local magnetic-field environment. These optically pumped magnetometers are more attractive for biological applications because they do not require cryogenic cooling and can also be miniaturized.

The researchers detected magnetic signals with an amplitude of up to 0.5 picotesla from the Venus flytrap, which is millions of times weaker than the Earth's magnetic field. "The signal magnitude recorded is similar to what is observed during surface measurements of nerve impulses in animals," explained Anne Fabricant. The JGU physicists aim to measure even smaller signals from other plant species. In the future, such noninvasive technologies could potentially be used in agriculture for crop-plant diagnostics, by detecting electromagnetic responses to sudden temperature changes, pests, or chemical influences without having to damage the plants using electrodes.