Visual Impairment, Blindness Cases in U.S. Expected to Double by 2050

NIH-funded studies tease out trends by race, ethnicity and sex

What is a comprehensive dilated eye exam? 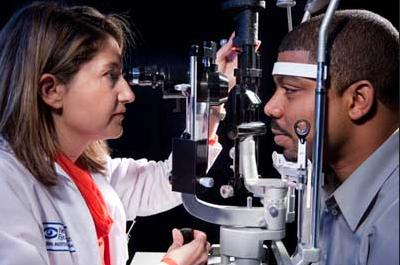 The findings suggest that there is a need for increased screening and interventions to identify and address treatable causes of vision loss. A slit lamp, with its high magnification, allows the eye care professional to examine the front of the patient’s eye.

Newswise — With the youngest of the baby boomers hitting 65 by 2029, the number of people with visual impairment or blindness in the United States is expected to double to more than 8 million by 2050, according to projections based on the most recent census data and from studies funded by the National Eye Institute, part of the National Institutes of Health. Another 16.4 million Americans are expected to have difficulty seeing due to correctable refractive errors such as myopia (nearsightedness) or hyperopia (farsightedness) that can be fixed with glasses, contacts or surgery.

The researchers were led by Rohit Varma, M.D., director of the University of Southern California’s Roski Eye Institute, Los Angeles, and published their analysis May 19th in JAMA Ophthalmology. They estimate that 1 million Americans were legally blind (20/200 vision or worse) in 2015. Having 20/200 vision means that for clear vision, you would have to be 20 feet or closer to an object that a person with normal vision could see from 200 feet away.

Meanwhile, 3.2 million Americans had visual impairment in 2015—meaning they had 20/40 or worse vision with best possible correction. Another 8.2 million had vision problems due to uncorrected refractive error.

“These findings are an important forewarning of the magnitude of vision loss to come. They suggest that there is a huge opportunity for screening efforts to identify people with correctable vision problems and early signs of eye diseases. Early detection and intervention—possibly as simple as prescribing corrective lenses—could go a long way toward preventing a significant proportion of avoidable vision loss,” said NEI Director Paul A. Sieving, M.D., Ph.D.

Over the next 35 years, Varma and his colleagues project that the number of people with legal blindness will increase by 21 percent each decade to 2 million by 2050. Likewise, best-corrected visual impairment will grow by 25 percent each decade, doubling to 6.95 million. The greatest burden of visual impairment and blindness will affect those 80 years or older as advanced age is a key risk factor for diseases such as age-related macular degeneration and cataract.

African Americans currently account for the second highest proportion of visual impairment, but that is expected to shift to Hispanics around 2040, as the Hispanic population—and particularly the number of older Hispanics—continues to grow. Hispanics have particularly high rates of diabetes, which is associated with diabetic eye disease, a treatable cause of visual impairment.

African Americans, meanwhile, are expected to continue to account for the second highest proportion of blindness. “African Americans are at disproportionately high risk for developing glaucoma, a potentially blinding eye disease that typically causes the loss of peripheral, but not central vision, so people tend to not realize that they are losing their vision and do not seek treatment,” he said.

May is Health Vision Month. For more information about how to keep eyes healthy, visit https://www.nei.nih.gov/hvm.

NEI leads the federal government’s research on the visual system and eye diseases. NEI supports basic and clinical science programs that result in the development of sight-saving treatments and address special needs of people with vision loss. For more information, visit http://www.nei.nih.gov.

About the National Institutes of Health (NIH): NIH, the nation’s medical research agency, includes 27 Institutes and Centers and is a component of the U.S. Department of Health and Human Services. NIH is the primary federal agency conducting and supporting basic, clinical, and translational medical research, and is investigating the causes, treatments, and cures for both common and rare diseases. For more information about NIH and its programs, visit http://www.nih.gov/.NIH…Turning Discovery Into Health®